WORLD Pakistan warns of 'genocide' in Kashmir, sees no talks with India

Pakistan warns of 'genocide' in Kashmir, sees no talks with India 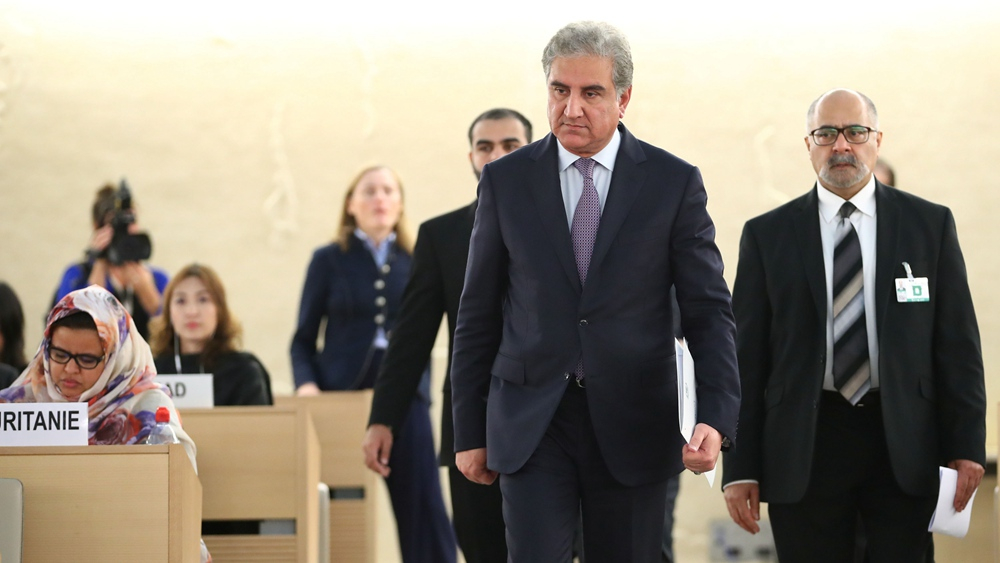 Pakistani Foreign Minister Shah Mehmood Qureshi told the top United Nations human rights forum on Tuesday that India's "illegal military occupation" of the Muslim-majority territory of Kashmir raises the specter of "genocide."
India revoked the autonomy of the disputed Himalayan region, home to 8 million people and a flashpoint for the nuclear-armed neighbors, on August 5.
"The forlorn, traumatized towns, mountains, plains and valleys of Indian-occupied Jammu & Kashmir reverberate today, with the grim reminders of Rwanda, Srebrenica, the Rohingya, and the pogrom of Gujarat," Qureshi told the UN Human Rights Council.
"The people of Indian-occupied Jammu & Kashmir are apprehending the worst... I shudder to mention the word genocide here, but I must... The Kashmiri people in the occupied territory – as a national, ethnic, racial and religious group of people – face grave threats to their lives, way of living and livelihoods from a murderous, misogynistic and xenophobic regime," he said.
There was no immediate comment from India in the council.

India and Pakistan both rule parts of Kashmir while claiming it in full. They have fought two wars over the region and their forces regularly trade fire across a 740-km Line of Control.
India flooded the Kashmir valley with troops, restricted movements and cut off communication as Prime Minister Narendra Modi withdrew special rights for the region on August 5. Mobile and internet connections have been cut off ever since.
Qureshi, speaking to reporters in Geneva, said: "I do not see in the present environment any possibility of a bilateral engagement with India."
He urged UN Secretary-General Antonio Guterres and the Security Council to help defuse tensions.
"Today eight million people are in prison, deprived of every political and civil liberty. The world cannot remain silent and the world should not remain silent. And if they do, they will be part of this criminal negligence," he said.
The minister accused India of having arrested more than 6,000 people without due process. Many had been "shipped to jails all over India," he said.

Qureshi also insisted that India's labelling of the Kashmir situation as an "internal affair" was "patently false," pointing out that the matter had been on the UN agenda for seven decades.
Also over the weekend, India's National Security Advisor Ajit Doval insisted that the lifting of communications restrictions would depend on Pakistan stopping deploying "terrorists" and fomenting unrest.
Indian-administered Kashmir has seen a decades-old armed rebellion – backed by Pakistan, New Delhi says – against Indian rule with tens of thousands, mostly civilians, killed.