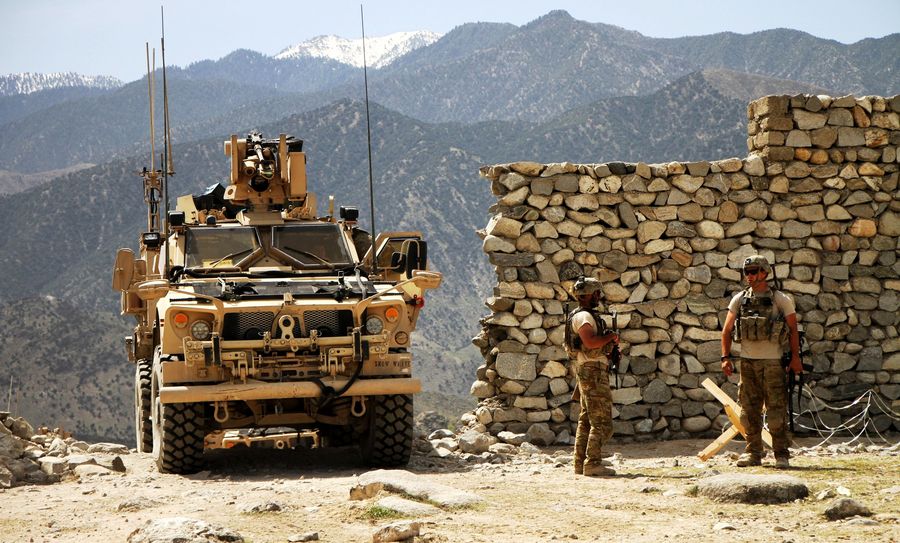 US soldiers stand near a US bombing area in Achin district of Nangarhar province, east of Afghanistan, April 15, 2017. (Photo: Xinhua/Rahman Safi)

ISLAMABAD, March 1 (Xinhua) -- Pakistani officials and experts welcomed the peace deal signed between Afghan Taliban and the United States, but some expressed caution over the future peace process of Afghanistan.

Taliban's political chief Mullah Abdul Ghani Baradar and U.S. Special Representative for Afghan Reconciliation Zalmay Khalilzad signed the peace deal on Saturday in Doha, Qatar. Under the accord, the United States and NATO will completely pull out their troops from Afghanistan in 14 months, while Taliban would not allow anyone to use Afghan soil against any other country and the Taliban would start intra-Afghan dialogue to form a new national government in the country.

Pakistani Prime Minister Imran Khan on Saturday welcomed the accord, saying "this is the start of a peace and reconciliation process to end decades of war and suffering of the Afghan people."

Meanwhile, Pakistani analysts appreciated the efforts of all the stakeholders to sort out a solution for peace in Afghanistan, a country that has been suffering war, conflicts and unrest for decades.

Defense and political analyst Haris Nawaz, a retired two-star general, told Xinhua that the agreement could provide a good opportunity to Taliban and other stakeholders in Afghanistan and to the United States to follow the agreement to bring back normalcy and peace.

"More than this deal, I want Afghan Taliban and U.S. officials to ensure the implementation of the agreement responsibly and wisely. Not everything is done yet. It is the first phase and a lot of work remains to be done to resolve this issue properly," said Nawaz.

He appreciated the Taliban for changing their hardline policy and rendering a guarantee to the international community for not allowing Afghan soil to be used for cross-border terrorism.

However, Director of Islamabad Council for International Affairs Saeed Chaudhry expressed reservations over the short troop withdrawal time of 14 months and feared that the United States is leaving the unrested country in haste only to save its own interests.

"This deal is only between the United States and the Taliban. There are several other stakeholders who would feel suppressed and ignored as the deal has given an upper hand to the Taliban who have control over a big portion of the Afghan land," said Chaudhry.

Chaudhry believed that U.S. President Donald Trump is withdrawing forces quickly as part of his 2020 presidential election campaign, saying Trump is in a hurry to fulfill the promise he made before the election in 2016 vowing to end the Afghan war and bring soldiers back home.

Earlier on Saturday in Doha, Pakistani Foreign Minister Shah Mahmood Qureshi reiterated Pakistan's stance about a responsible withdrawal of the U.S. troops from Afghanistan after the peace deal.

Another defense analyst retired general Amjad Shoaib also felt that leaving Afghanistan after signing a deal with a single group with whom the U.S. forces have been fighting and without bringing forth any solid roadmap might be a risky move.

"There are several fractions of Taliban who are not part of the deal and they have opposed it also. We have also witnessed a strong presence of Islamic State (IS) network which cannot be handled by Afghan government forces single-handedly," said Shoaib, fearing that another round of conflicts within Afghanistan could occur between Taliban, other fractions, IS, local warlords and the Afghan forces once U.S. forces withdraw in such a short time.