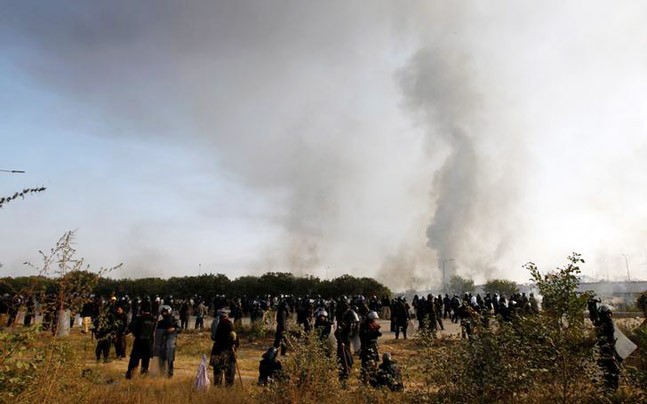 The protesters have called for Pakistan's law minister Zahid Hamid to resign for changes made about Khatm-i-Nabuwwat or finality of prophethood oath in the Elections Act 2017 passed in September. The oath was later restored to its original form.

Islamabad police have launched a clearance operation against protesters from the Tehreek-e-Labaik Pakistan  who've camped at the Faizabad interchange for weeks, and have been demanding the resignation of Pakistan's law minister, Zahid Hamid, Pakistani news reports said.

A policeman was killed, and 63 people were injured, The Nation reported. "At least" 150 protesters have been taken into custody since November 8, when the agitation began, Dawn reported.

There are protests in Karachi and Lahore, too, the report said.The Express Tribune also reported protests in Faislabad, Peshawar, and the Silakot-Wazirabad road in Punjab province.

Protesters have been blocking the Islamabad Expressway and Murree Road at Faizabad interchange that connect Islamabad with its only airport and the garrison city of Rawalpindi.

They want Zahid Hamid to resign for changes made about Khatm-i-Nabuwwat or finality of prophethood oath in the Elections Act 2017 passed in September. Dawn's report said "there is no proof that Hamid was responsible for the amendment."

Later in the day, the Pakistan military spokesperson Major General Asif Ghaafoor tweeted that the Pakistan Army chief had spoken to Prime Minister Shahid Khaqan Abbasi and urged that "both sides" avoid violence and deal with the situation peacefully.

Today morning, police began dispersing the protesters after "several rounds of negotiations" initiated by Prime Minister Abbasi's administration failed, and after the supreme court, the Islamabad High Court, and several religious parties "repeatedly" called for the end of a protest they considered to be unlawful, Dawn reported.

The Pakistan Electronic Media Regulatory Authority told TV channels not to broadcast footage of the operation.

The Islamabad High Court, which reports said called the protest an act of terrorism, had set November 23 as the deadline to remove the protesters.

The government had deployed hundreds of security personnel in riot gear to take action against the protesters but had been dilly-dallying, fearing a backlash from extremists.

It had restored the Khatm-i-Nabuwwat to its original form recently after National Assembly passed the amendment in the Elections Act 2017.