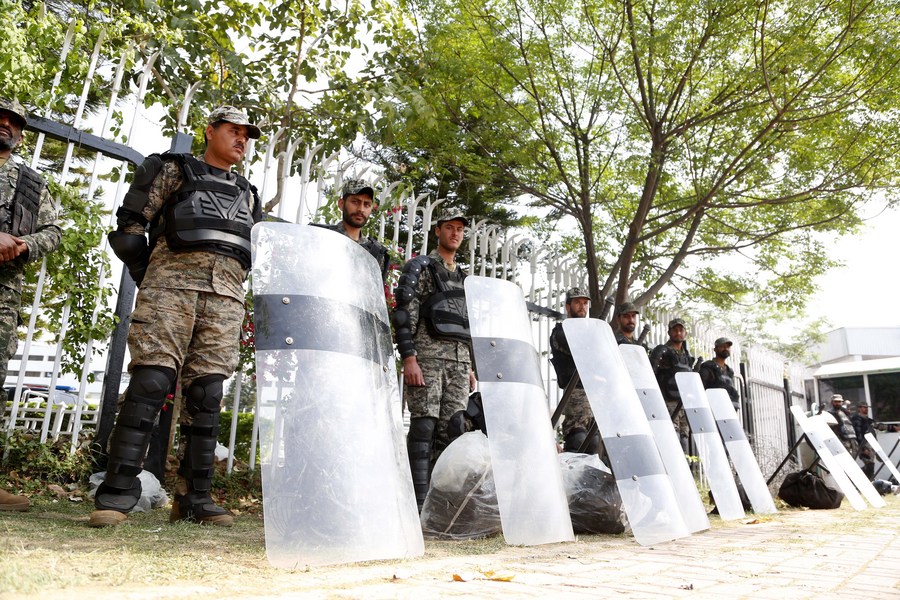 Pakistani President Arif Alvi on Sunday dissolved the country's National Assembly, or the lower house of the parliament, on the advice of Prime Minister Imran Khan after a motion of no-confidence by joint opposition against Khan was declared unconstitutional.

ISLAMABAD, April 3 (Xinhua) -- Pakistani President Arif Alvi on Sunday dissolved the country's National Assembly, or the lower house of the parliament, on the advice of Prime Minister Imran Khan after a motion of no-confidence by joint opposition against Khan was declared unconstitutional.

Chaudhry said that the Constitution asks every citizen of Pakistan to be loyal to the country rather than a foreign power, questioning the constitutional validity of the motion brought on the directives of a foreign power, amid the chants of "the friend of the United States is a traitor" from the government benches.

Approving Chaudhry's argument, Deputy Speaker Qasim Khan Suri, who was chairing the session, rejected the no-confidence motion, citing article 5 of the Constitution that "no foreign government is allowed to conduct regime change operations against an elected government."

Following the rejection of the motion, Khan said in a televised address to the nation that he has sent an advice to the president to dissolve the National Assembly, calling for an interim government before going for fresh elections.

"Today, the deputy speaker foiled that agenda by rejecting no-confidence motion... A conspiracy was being hatched ... The nation will not let such kind of conspiracies succeed," Khan said.

The prime minister said that the Pakistani public will now use its right to choose its government through elections, adding that no foreign power should be allowed to make decisions through conspiracies.

"I want to tell my nation to start preparing for elections and not let any foreign power decide the future of Pakistan."

The no-confidence motion was moved by an alliance of major opposition parties of the country, which claimed to have 177 member representations in the National Assembly, five votes more than the required to de-seat the prime minister.

On March 27, while addressing a public gathering in Islamabad, Khan mentioned receiving a letter on March 7, a day prior to the filing of the motion in the National Assembly, from a Pakistani ambassador to a "powerful country" stating that the ambassador was informed about the motion even before it was moved, and warned of consequences if the country failed to de-seat Khan.

Khan later revealed that the United States showed displeasure when he visited Russia in February, telling Pakistani officials, in official communication with them, of regime change through the no-confidence motion.

A meeting of the National Security Committee on March 31 also took notice of the foreign attempt to topple the government and an official demarche was made through official channels to the U.S. embassy in Pakistan, Khan said.

Reacting to the government's move to call for early elections following the dissolution of the assembly, the leader of the opposition in the lower house Shahbaz Sharif said that the rejection of the motion by the deputy speaker of the National Assembly is unconstitutional.

Bilawal Bhutto Zardari, chairman of the opposition Pakistan Peoples Party, said that the government has violated the Constitution by not allowing voting to take place.

The opposition alliance refused to accept the dissolution of the National Assembly and submitted a petition to the Supreme Court of Pakistan, pleading to review the ruling given by Suri, set aside the prime minister's advice to the president to dissolve the National Assembly, and that parliament session should be summoned again to conduct voting on the no-confidence motion.

Meanwhile, the Supreme Court of Pakistan took a suo-moto notice of the ongoing situation in the country, with Chief Justice of Pakistan Umar Ata Bandial holding an important meeting with their fellow judges to deliberate on the current political and constitutional crisis evolved after the opposition's no-confidence motion was rejected.