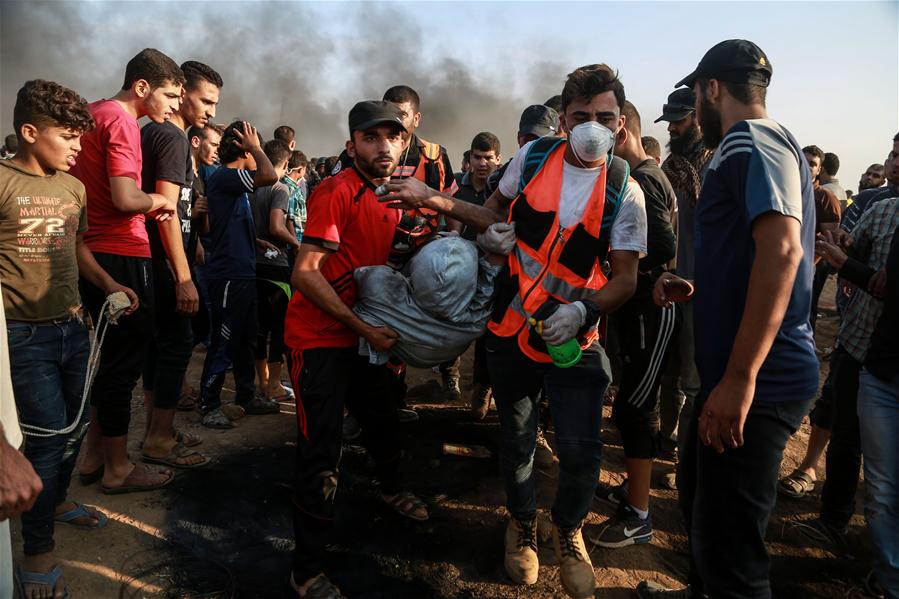 Palestinian medics carry a wounded man during clashes with Israeli troops on the Gaza-Israel border, east of Gaza City, on Sept. 28, 2018. At least six Palestinians were killed and more than 500 injured on Friday during the weekly clashes with Israeli soldiers stationed on the border between eastern Gaza Strip and Israel, medics said. (Photo: Xinhua/Stringer)

GAZA, Sept. 28 (Xinhua) -- Seven Palestinians were killed on Friday, including two children under the age of 15, during the weekly clashes between hundreds of Palestinian protesters and Israeli soldiers in eastern Gaza Strip, medics said.

Ashraf al-Qedra, spokesman of the Gaza Health Ministry, said that 506 were injured, of whom 210 were referred to hospitals. A total of 90 were shot by Israeli soldiers' gunshots, including 35 children, four women, four paramedics and two journalists. Three are in serious condition.

On Friday, thousands joined the 27th Friday of the rallies called "Great March of Return" that began on March 30. They gathered at five spots in eastern Gaza Strip, along with the border with Israel.

They waved Palestinian flags, burned tires, cut the barbed wire of the fence of the border, threw stones, homemade hand grenades and Molotov cocktails at the soldiers, and released dozens of arson balloons into Israel, according to Israeli media reports.

Al-Qedra said that since March 30, the Israeli army shot dead 193 Palestinians and wounded more than 20,000 others in the Gaza Strip. Around half of them were shot by Israeli soldiers' live gunshots.