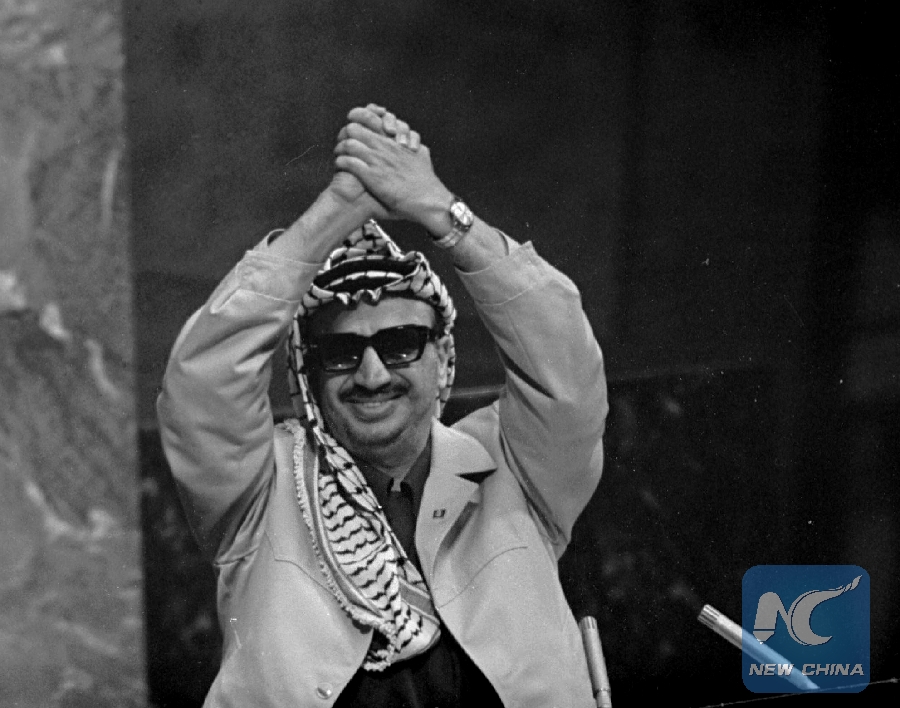 In this Nov. 13, 1974 file photo, Yasser Arafat clasps his arms over his head as he addresses the United Nations General Assembly, at U.N. headquarters. (Photo: Xinhua/AP)

A new film about the late Palestinian President Yasser Arafat, the Photography of the Siege, was screened in Ramallah city in the West Bank, marking the 14th anniversary of Arafat's death.

It unveiled the man's personal relationship with his aides and close companions during the Israeli imposed siege on his compound in Ramallah city between 2000-2004.

The film, by Palestinian photojournalist Jamal Arouri, is based on a book he assembled two years after Arafat died, putting together photos he took to document the life of the charismatic president's last years.

"As a photojournalist, I documented a significant number of photos which are being revived to the screen," said Arouri.

"This film, the Photography of the Siege, includes a number of people from the presidential guard, international solidarity activists, foreign ministers, Arab and Jewish Knesset members in addition on European parliament members," he added.

Arouri told Xinhua that he took specific photos to individuals and asked them to comment on the pictures and the moment it was taken, which gave the film an emotional and personal aspect.

Mohammad Al-Ashi, a personal guard of late Arafat, said that in the few years the film depicts, the president did his best to live with his besieged companions a normal life. He described the siege as a conspiracy against Arafat, who was known as Abu Ammar.

"What happened in Ramallah the last five years in Abu Ammar's life was a large conspiracy on the president that lead to his passing in the way that is known to all," Al-Ashi said.

Many of those who stayed close to Arafat under the siege said they were touched by the man's human and described him as humble and wise, especially during the difficult moments.

The film interviewed another Arafat's close guard, General Mohammad Wishah, who said "it was a harsh and unjust military siege."

He recalled that "sometimes we couldn't find a piece of bread to eat. But it was a rich experience that revealed the humanitarian aspect of the leader Yasser Arafat and the men around him who were all united."

"Yasser Arafat made us feel his tenderness as a father during the siege, that when he saw us tired and asleep, he would cover us, check on each of us and tour all locations although we were besieged inside the building, but we had taken all necessary measures to fight back any assault from the Israeli side," he added.

Arafat died on Nov. 11, 2004 at the age of 75 at a hospital in France due to an unknown illness, amidst Palestinian accusations of Israeli poisoning him.

Arafat's wife has resorted to the French judiciary to look into her husband's death, but no results were made public.

Arafat had lead the Palestine Liberation Organization (PLO) since 1969 and became the first president of the Palestinian Authority (PA) since its establishment in 1994, following the signing of the interim Oslo Accords between the PLO and Israel in 1993.

In 1994, Arafat received the Nobel Peace Prize, jointly with Yitzhak Rabin and Shimon Peres for the achievement of the historic deal.