WORLD Palestinian killed in clashes on anniversary of Arafat's death

Palestinian killed in clashes on anniversary of Arafat's death 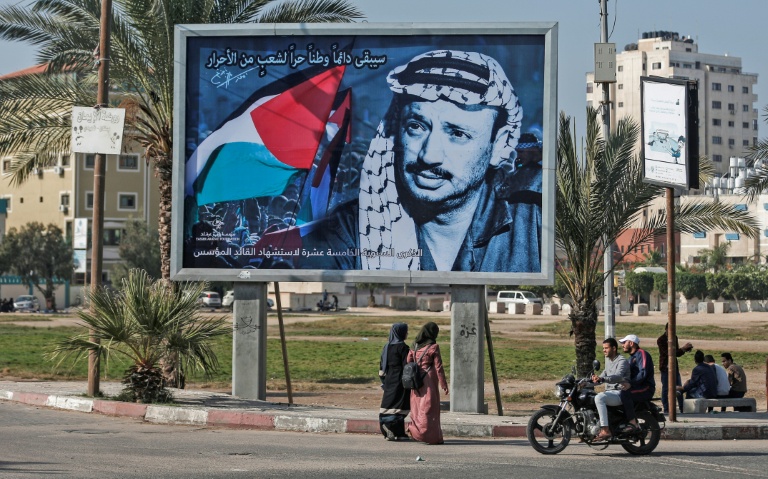 Demonstrations were held in Ramallah and the Hebron area in the West Bank to commemorate the legacy of Arafat, revered as a hero by Palestinians.

Palestinian president Mahmud Abbas, who succeeded Arafat, laid a wreath at his tomb at a ceremony in Ramallah, where hundreds gathered with pictures and flags for the anniversary.

"We will never agree to give up on our martyrs, our most sacred martyrs."

Sporadic clashes erupted with Israeli forces, including in the Hebron area, where a Palestinian man was shot dead, the Palestinian health ministry and medics said.

Palestinian medical sources identified the man as 22-year-old Omar al-Badawi, who was hit in the chest with live fire at Al Arroub refugee camp before being taken to Ahali hospital in Hebron, where he was pronounced dead.

An Israeli military spokeswoman said a large number of Palestinians threw stones and firebombs at soldiers, who responded with "riot-dispersal means and live fire".

Medics also reported Israeli use of live fire in clashes at Fawwar, south of Hebron, one of the most tense cities in the West Bank.

Palestinians threw stones at Israeli soldiers in Hebron itself and troops responded with tear gas, an AFP journalist reported.

The Palestinian Red Crescent reported at least 49 injuries in total, including two from live fire.

His body was exhumed in 2012 for tests, but a subsequent French investigation found no proof of poisoning.

Hamas, the Islamist leaders of the Gaza Strip, prohibited a Fatah movement event to mark the death of Arafat in the coastal Palestinian enclave.

Hamas and Fatah, which Arafat led, have been deeply divided since 2007 near civil war when Hamas overthrew Abbas's forces in the blockaded Gaza Strip.

No Palestinian elections apart from local polls have been held since 2006 because of the split, but both sides have spoken of a renewed push to do so.

Abbas, 84, spoke again of holding elections on Monday, saying legislative polls should be held first, followed by a presidential vote.

He has insisted on holding the elections in the West Bank, in the Gaza Strip, and in Jerusalem.

Israel occupied the West Bank and East Jerusalem in the 1967 Six-Day War.

It later annexed east Jerusalem and considers the entire city its capital, while the Palestinians view the eastern sector as the capital of their future state.

Hamas leader Ismail Haniya on Sunday also spoke of elections, saying they were "at the very foundation of the Palestinian national project".

In 2005, Abbas comfortably won presidential elections held in both the West Bank and Gaza.

But a year later, Hamas shocked the world by beating Abbas's Fatah movement in parliamentary polls.

Unlike Fatah, the Islamists reject all negotiations with Israel and support violent means. They have fought three wars with Israel since 2008.