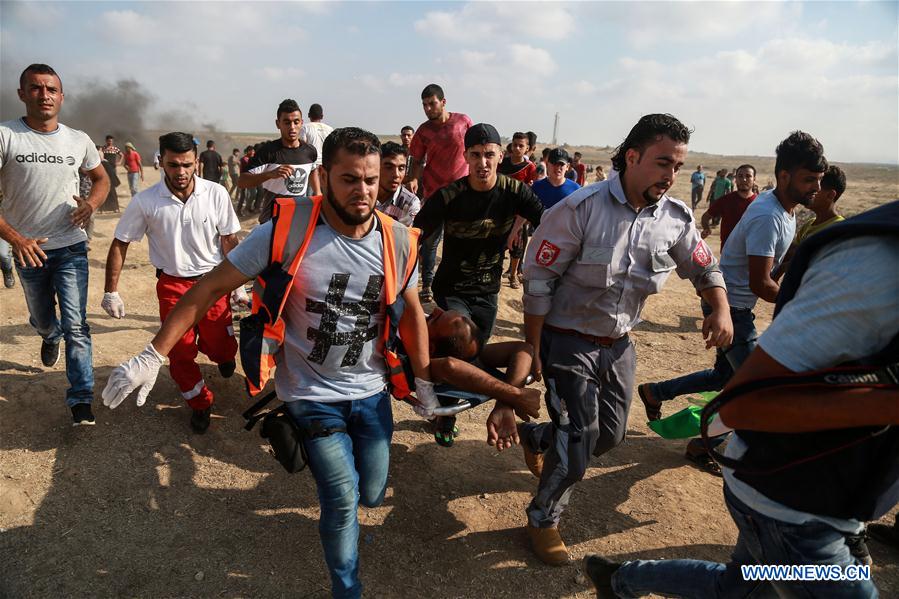 Palestinian medics carry a wounded man during clashes with Israeli troops on the Gaza-Israel border, east of Gaza City, on Aug. 3, 2018. A Palestinian was killed and 220 were wounded by Israeli soldiers on Friday during clashes near the Israel-Gaza border, Palestinian Health Minister spokesman in the Gaza Strip said. (Photo: Xinhua)

A Palestinian was killed and 220 others injured during clashes with Israeli soldiers in the eastern Gaza Strip close to the border with Israel on Friday afternoon.

Organizers of the protests called on the Palestinians to rally in solidarity with a Palestinian, who was killed after stabbing three Israelis in the West Bank.

It is the 19th consecutive anti-Israel Friday protests since March 30, the first day of the ongoing Palestinian "Great March of Return" rally against Israel's 11-year crippling blockade and the U.S. embassy move to the disputed holy city of Jerusalem.

The health ministry said the Israeli army has killed 155 Palestinians and wounded more than 17,000 others in the eastern Gaza Strip since the start of rallies and protests on March 30.

Eyewitnesses said Gaza protesters on Friday flew the largest ever arson kite with a burning tire into Israel, while Israeli soldiers stationed at the border area fired dozens of tear gas canisters at the demonstrators.

During the protests, an Israeli army tank fired a shell at a Hamas military lookout post east of Rafah in the southern Gaza Strip in response to the fire and the bomb targeting Israeli soldiers from Gaza.

The protests on Friday occurred a day after a senior Hamas delegation arrived in the Gaza Strip from Egypt to discuss a possible cease-fire with Israel and resume internal reconciliation with Palestinian President Mahmoud Abbas' Fatah Party.

Abdul-Latif Qanou, Hamas spokesman in Gaza, said in a statement that the marches have become very close to achieving its goals.

"We are so close to picking up the fruits of the Great March of Return following the large sacrifices of our people. These marches will go on up to the end until it achieves all its national goals," he said.