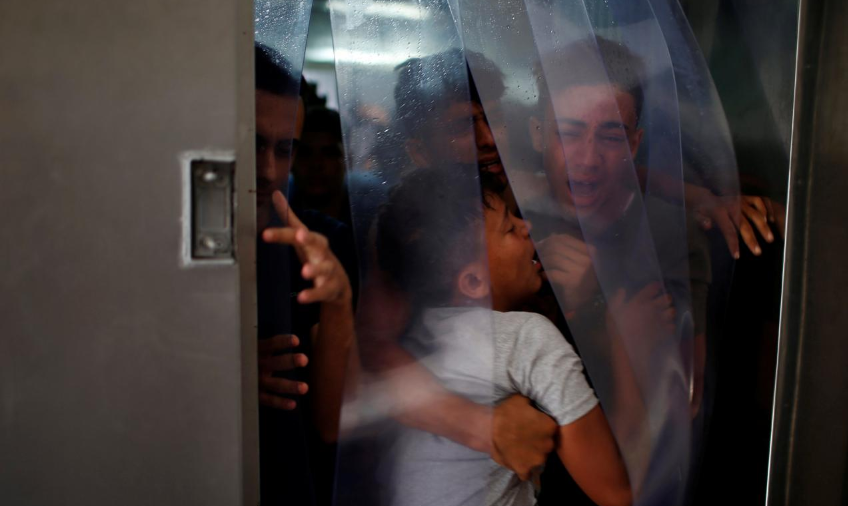 Relatives of a Palestinian, who was killed at the Israel-Gaza border, react at a hospital in Gaza City June 18, 2018 (Photo: Reuters)

A Palestinian was killed on Monday when a part of Israel’s fortifications on the Gaza border blew up as he tampered with it, the Israeli military said.

The 24-year-old man’s death in northern Gaza followed a more than two-month surge in tensions along the frontier, where Israeli troops have killed at least 125 Palestinians during sometimes violent mass demonstrations.

Residents said the man killed in the blast was among a group of Palestinians who approached the border fence, drawing fire from soldiers on the other side. An Israeli military statement described them as “five terrorists who tried to sabotage the (border) security infrastructure”.

“The security infrastructure exploded, and as a result of that, there were casualties among the terrorists,” it said.

Military spokesmen declined to elaborate on the blast or say whether Israel had employed a new counter-measure against incursions.

Since its last war with Gaza’s dominant Hamas Islamists in 2014, Israel has stepped up efforts to prevent cross-border attacks, improving rocket interceptors and investing in technologies for detecting and destroying guerrilla tunnels.

Faced with international censure over its use of live fire in the fence protests, Israel says troops have been holding off border breaches and responding to gunmen who tried to use civilians as cover for attacks on them.

There have been no serious Israeli casualties in the confrontations since the so-called “Great March of Return” was launched on March 30 to press for what Palestinians see as their right to lands lost to Israel during the 1948 war of its founding.

But incendiary materials flown in from Gaza by kites or helium balloons have destroyed swathes of farmland and forests, and killed wildlife.

In what the military described as a response to the blazes, Israeli jets struck nine Hamas targets in northern Gaza on Monday. Sirens sounded in outlying Israeli areas and the military said three rockets had been launched toward Israeli territory but one fell short in Gaza.“These are terrorist acts that endanger Israeli residents living in southern Israel and damage extensive areas in Israeli territory,” a military statement said of the kites and balloons.

There were no casualties in the air strikes or rocket launches.

Israel has drafted in civilian drone enthusiasts as army reservists, instructing them to fly their remote-controlled aircraft into the kites, an Israeli general said, but an effective means to stop the kites has yet to be found.

Around two million people live in Gaza, most of them the descendants of refugees from what is now Israel. The territory has been controlled by Hamas for more than a decade, during which it has fought three wars against Israel.

Israel and Egypt maintain a blockade of the strip, citing security reasons, which has caused an economic crisis and collapse in living standards there over the past decade.