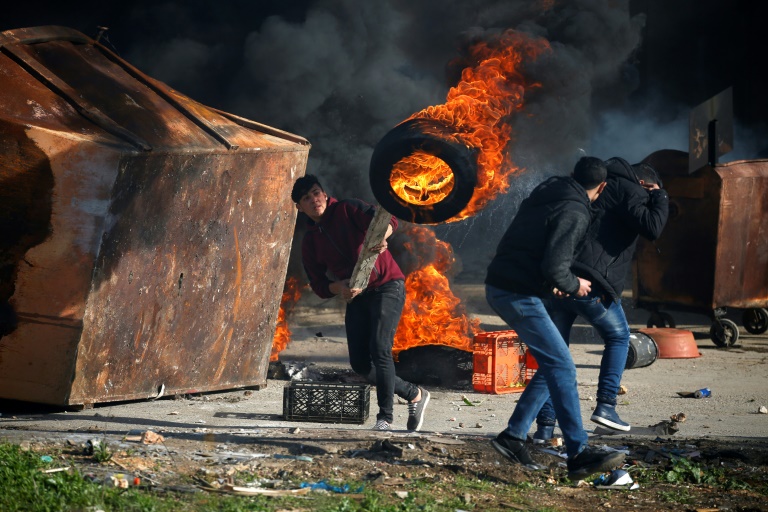 A palestinian uses a piece of wood to move a burning tire during clashes with Israeli troops in Ramallah in the occupied West Bank on December 13, 2018(Photo: AFP)

RAMALLAH/GAZA, Jan. 26 (Xinhua) -- The Palestinians warned on Saturday that the current Israeli escalation of violence against the Palestinians is serving the Israeli parliamentary election that is scheduled in April.

The Palestinian Authority (PA) said in an official press statement that "the Israeli crimes and killings in the West Bank, Jerusalem and Gaza are again reiterating that the Israeli government is going ahead with the policy of escalation."

The statement held the Israeli government of Prime Minister Benjamin Netanyahu fully responsible for this escalation "that would lead to dangerous consequences and more tension and would create an uncontrolled dangerous atmosphere."

The PA statement called on the international community to ensure protection for the Palestinian people, adding that the people and their leadership will remain with steadfastness and will never give up their stable legitimate rights.

The PA statement was made after the Israeli army and the Israeli police killed four Palestinians in the past 24 hours, including one in Gaza, one in Jerusalem and two in the West Bank on Friday and Saturday.

Earlier on Saturday, the PA Health Ministry said in a statement that armed Israeli settlers backed by Israeli army forces shot and killed 38-year-old Hamdi el-Na'san and wounded nine others by live ammunition.

Residents of the village said that dozens of armed settlers and Israeli soldiers stormed the village of Lemghayar north of the West Bank city of Ramallah and clashed with its residents using live gunfire and tear gas.

Saeb Erekat, Secretary General of Palestine Liberation Organization (PLO) Executive Committee, said in an emailed press statement on Saturday evening that he condemned the settlers' attack on the village.

"The ongoing terrorism of the settlers, totally backed by the occupation army forces against Palestinian civilians, needs an urgent international protection for the Palestinians and an immediate investigation into these crimes," said Erekat.

Hanan Ashrawi, member of the PLO Executive Committee, also said in a press statement that the crimes committed against the Palestinians is an outcome of the growing "Israeli culture of terrorism, extremism and racism."

Ashrawi called on the International Criminal Court (ICC) to bear its political, human and legal responsibility and act on the formation of investigations committees and send international inspectors to ensure protection for the armless Palestinians.

Meanwhile, the Palestinian consensus government also condemned what it termed as "the Israeli occupation escalation campaign," saying the escalation is part of the policies of aggression and repression that serves the Israeli election.

Yousef al-Mahmoud, spokesman of the government, said that "the incitement and the international silence backed by the United States had encouraged the Israeli occupation to implement its aggressive policies against our people."

"The failure of the international community to ensure an international protection for the Palestinians had encouraged the settlers and their terrorist organizations to carry on with their assaults on the armless Palestinians," said the statement.

Osama al-Qawasmi, Palestinian President Mahmoud Abbas' Fatah movement spokesman in the West Bank, said in a press statement that "what had happened is a filed execution as part of the Israeli election campaign that Israeli leaders are competing on shedding the Palestinian blood."

In Gaza, Islamic Hamas movement and the Islamic Jihad called on the Palestinians in the West Bank to escalate their confrontations against the Israeli army and the Israeli settlers in response to the Israeli killing of el-Na'san.

Meanwhile, Israel Radio reported that the Israeli army began to investigate into the incident in the village north of Ramallah without giving any more details.

In the West Bank and East Jerusalem, around half a million Israeli settlers live in 120 settlements where 2.7 million Palestinians live. Friction between the Palestinians and the settlers always turn into violence and more tension.