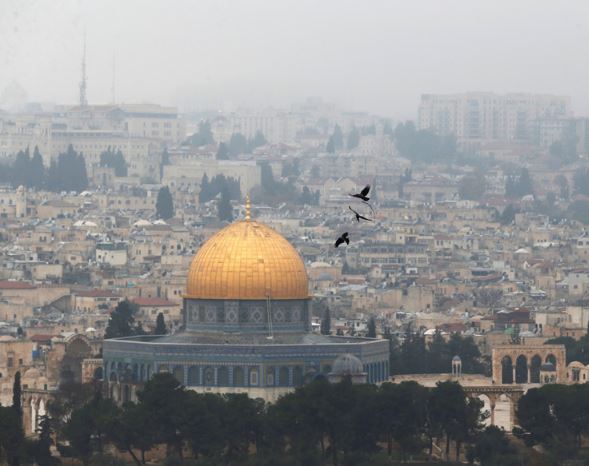 Birds fly on a foggy day near the Dome of the Rock, located in Jerusalem's Old City on the compound known to Muslims as Noble Sanctuary and to Jews as Temple Mount, Jerusalem, January 2, 2018. (Photo: Xinhua)
RAMALLAH, Feb. 6 (Xinhua) -- Palestinian President Mahmoud Abbas on Thursday stressed that the capital of the Palestinian state can only be East Jerusalem instead of Abu Dis, official Palestinian news agency WAFA reported.

In a meeting with the local popular movements and civil society groups in his West Bank headquarters in Ramallah city, Abbas said that he will not accept any alternative suggested in the US President Donald Trump's peace plan for Middle East.

"We will never accept a state without having East Jerusalem that was occupied in 1967 as an eternal capital for the state of Palestine," Abbas said.

"We will confront this fateful battle and we will win," he added.

The meeting is seen as part of Abbas' efforts to rally local and international support against Trump's peace plan, also known as the "Deal of the Century."

Palestinians, who immediately shunned the "Deal of the Century," said that they were not consulted on the plan and that it is far from international legitimacy resolutions concerning a peace settlement based on the two-state solution.