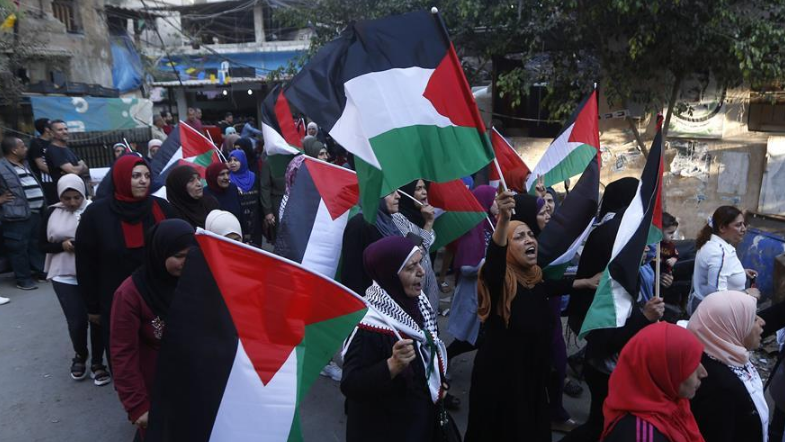 Palestinians take part in a protest against the new Middle East peace plan, the "Deal of the Century," in the Burj Barajneh refugee camp near Beirut, Lebanon, June 24, 2019. (Photo: Xinhua)

Meanwhile, tens of protesters held a sit-in in front of the headquarters of the Economic and Social Commission for Western Asia to protest against the U.S.-sponsored Manama economic conference in Bahrain which is set to open on Tuesday.

The conference will discuss the economic chapter of the U.S. Middle East peace plan.

Mohammad Al Hajjar, member of parliament from Future Movement, said that Palestine "is not for sale."

"No matter how many conferences will be held, the Palestinians will be back to their lands one day," he said.

Fouad Makhzoumi, member of parliament of National Dialogue party, said that Lebanon will not accept to sell Palestinian lands while criticizing the U.S. plan to naturalize Palestinian refugees in countries that are hosting them.

Lebanese President Michel Aoun and Prime Minister Saad Hariri voiced their objections to the deal by announcing earlier this month that Lebanon will be boycotting the conference in Manama.

The United States is holding the international economic conference in Bahrain, seeking to encourage investment in the Palestinian territories as the first part of Trump's long-awaited Middle East peace plan.

The "Deal of the Century" has already been heavily criticized for the exclusion of a Palestinian state.

The United Nations Special Coordinator for Lebanon Yan Kubish toured Palestinian camps in Lebanon on Tuesday to follow up on the situation of people there.

Kubish said that the only way to reach a solution with regard to the "Deal of the Century" is through political negotiations and the implementation of the United Nations' resolutions.

Kubish added that people in the camps called for more support for the United Nations Relief and Works Agency (UNRWA) to enable it to provide more help for Palestinian refugees in Lebanon.

Some 450,000 refugees are registered with the UNRWA in Lebanon, with many living in the country's 12 refugee camps.

Palestinian refugees represent an estimated 10 percent of the population of Lebanon.