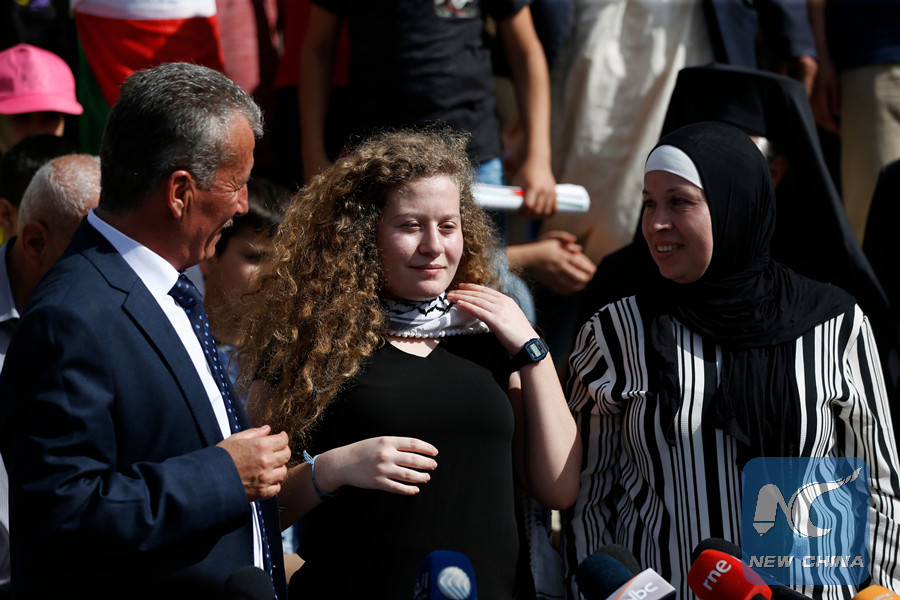 Palestinian activist and campaigner Ahed Tamimi (C) stands between her father (C-L) and mother (C-R), during a press conference in the West Bank village of Nabi Saleh on July 29, 2018, upon her release from prison after an eight-month sentence. (photo: AFP )

RAMALLAH, July 29 (Xinhua) -- Ahed Tamimi, 17, urged Sunday that the campaigns organized for her would continue for all other Palestinian prisoners in Israeli jails and said that she will continue to advocate for their causes.

"I hope that the campaigns continue and I will surely be with you in support of the prisoners," the young girl said, addressing journalists in her hometown, Nabi Saleh village.

She said the only thing that caused her a lot of pressure during her imprisonment is that she thought she would miss her sitting for the high school diploma.

"But contrary to my fear, in prison I sat for my examinations and we decided to name our class the class of challenge, because we were able to challenge the Israeli prison authorities that tried to stop us by several means including declaring an emergency case to make us return to our cells instead of studying," she added.

She spoke about many female prisoners who gave her inspiration and power to continue to study and learn more about international law during their imprisonment despite consistent Israeli measures against them.

Tamimi described the transfer from the prison facility to court as a very difficult ride with human rights violations, including insults and provocation during interrogation.

When asked about her plans in the future, she said "I'm planning to pursue my education at university to study law in order to be able to raise my country's cause to all international platforms and to speak out for the plight of prisoners to the entire world and international tribunals."

Palestinian President Mahmoud Abbas received Tamimi and her mother hours after their release from Israeli jail, in his office in Ramallah.

Abbas described the girl as a model for popular resistance and struggle for freedom, reiterating his support to non-violent resistance as a vital weapon facing the Israeli occupation, according to the official Palestinian news agency WAFA.

The mother and the daughter were released from Israeli jail Sunday morning after spending eight months in jail.

Upon her release, Tamimi said her real happiness would be fulfilled once the remaining female inmates in Israeli jails are freed.

Her father told Xinhua that he "feels happy today" as a father, promising "that the message and actions of peaceful resistance against the occupation will continue despite what the Israelis are trying to do to destroy our happiness."

Official Palestinian sources said that around 300 children are currently detained in Israeli jails, most of whom were trialed in military courts.

Tamimi has been detained since Dec 19, 2017, in a night raid four days after a video of her slapping an Israeli soldier went viral on the internet.

Amnesty International, a global movement campaigning to end abuse of human rights, has called for Tamimi's release and accused Israel of "discriminatory treatment of Palestinian children."

Tamimi's mother, who took the video of her daughter and her cousins slapping the soldier, was also arrested on Dec. 20, 2017, and accused of incitement.

The Tamimi family and dozens of others from Nabil Saleh village near Ramallah have been engaged in weekly peaceful protests against Israeli settlement expansion and land seizure in their village.