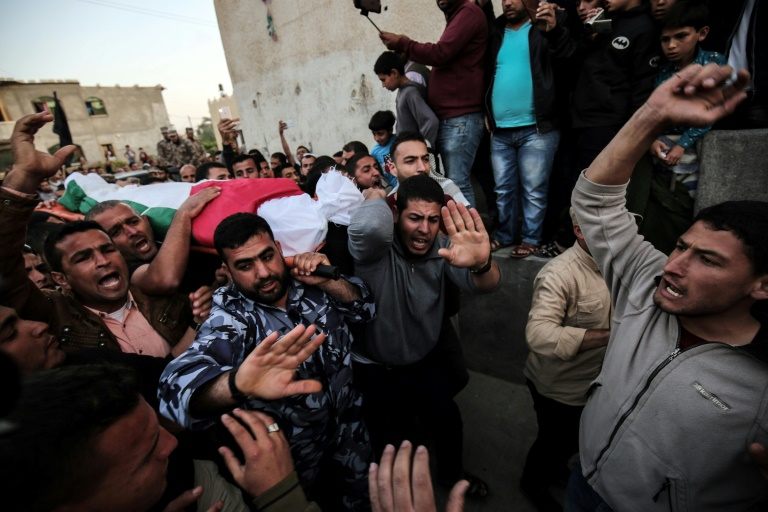 Mourners carry the body of a Palestinian killed during clashes with Israeli forces on the Israeli-Gaza border, during his funeral in the Gaza Strip on April 6, 2018. (Photo: AFP)

In addition to the nine dead, at least 491 were wounded by Israeli gunfire, the health ministry in the Hamas-run enclave said.

Israel said there were around 20,000 protesters and that they were seeking to breach the border.

Numbers were down from the previous Friday, when tens of thousands approached the border in demonstrations that saw Israeli forces kill 19 Palestinians, making it the bloodiest day in Gaza since a 2014 war.

No Israelis were injured on either day and the latest deaths have sparked fresh calls for an investigation.

Among those killed on Friday was Yasser Murtaja, 30, a photographer with the Gaza-based Ain Media agency, who died from his wounds after being shot, the health ministry said.

Murtaja's company confirmed his death, with witnesses saying he was close to the front of the protests in southern Gaza when he was hit.

An AFP picture taken after he was wounded showed Murtaja wearing a press vest as he received treatment.

His brother Motazem, also a journalist, said he was next to him when he was shot. "The target was very clearly journalists," he said.

Israel's army said it "does not intentionally target journalists."

"The circumstances in which journalists were allegedly hit by Israeli Defence Force (IDF) fire are not familiar to the IDF, and are being looked into," it said in a statement.

Murtaja's body was taken from the hospital to his home in Gaza City Saturday morning, with dozens of journalists following, many fighting back tears.

It was wrapped in a Palestinian flag, with a press flak jacket placed on his stomach.

Ismail Haniya, the head of Gaza's Islamist rulers Hamas, attended the funeral and said that journalists were attacked by Israel while trying to show a "true picture of a blockaded, downtrodden people".

In the West Bank political capital of Ramallah, around 50 Palestinian journalists held a vigil for Murtaja.

Christophe Deloire, secretary general of watchdog Reporters Without Borders (RSF), said Murtaja was "obviously the victim of an intentional shot" and that his organisation "condemns with indignation the deliberate shootings of the Israeli army against journalists."

Deloire urged an independent investigation of the incident.

The Palestinian Journalists' Syndicate said five other reporters were also shot and wounded by the Israeli army during Friday's protests, despite wearing clothes clearly identifying them as journalists.

A group of over 70 international NGOs operating in the occupied Palestinian territories meanwhile condemned Friday's "unlawful killing of civilians in Gaza," calling for "an independent and transparent investigation".

Weeks of border protests have been called to demand the return of Palestinians to land they were forced from or fled after the founding of Israel 70 years ago.

They come with tensions high as the United States gears up to shift its embassy in Israel to Jerusalem after recognising the disputed city as the capital of the Jewish state. 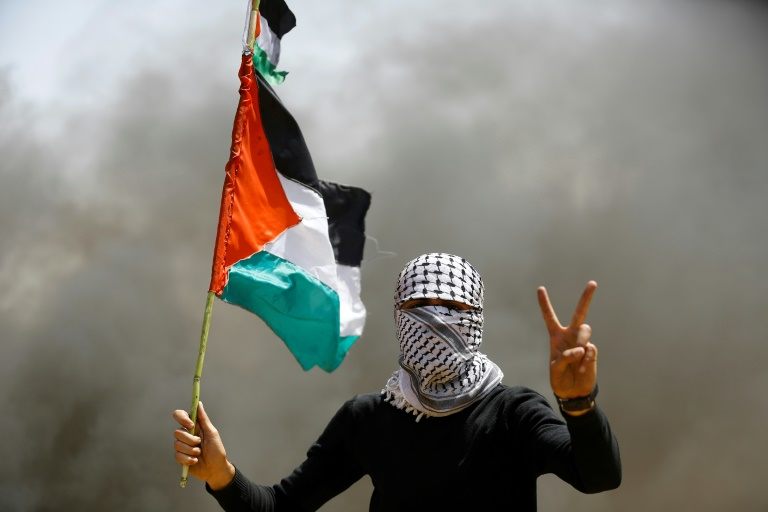 A Palestinian demonstrator covers his face with a traditional Palestinian Keffiyah scarf during a protest, on the Gaza-Israel border, east of Gaza City, on April 6, 2018. (Photo: AFP)

Protesters on Friday said economic woes were also fuelling frustration in Gaza, which has been under an Israeli blockade for a decade.

Egypt has mostly closed its border with the territory in past years, leaving the cramped area of two million people largely sealed off.

Late Friday, Kuwait called on the Security Council to investigate the deaths, but the US is likely to veto such a probe.

Israel rebuffed international calls for investigation into last Friday's killings, with the army saying troops opened fire "in accordance with the rules of engagement".

"None of our troops were wounded, the fence was not crossed," he said, noting that what happened last week had "deterred Hamas, which prevented the masses from approaching the fence".

Israel accuses Hamas, with whom it has fought three wars since 2008, of using the protests as a cover to carry out violence.

It alleges more than half of those killed on March 30 were members of militant groups, including Hamas's armed wing.

Hamas claimed only five of the dead and said they were participating "in popular events side-by-side with their people."