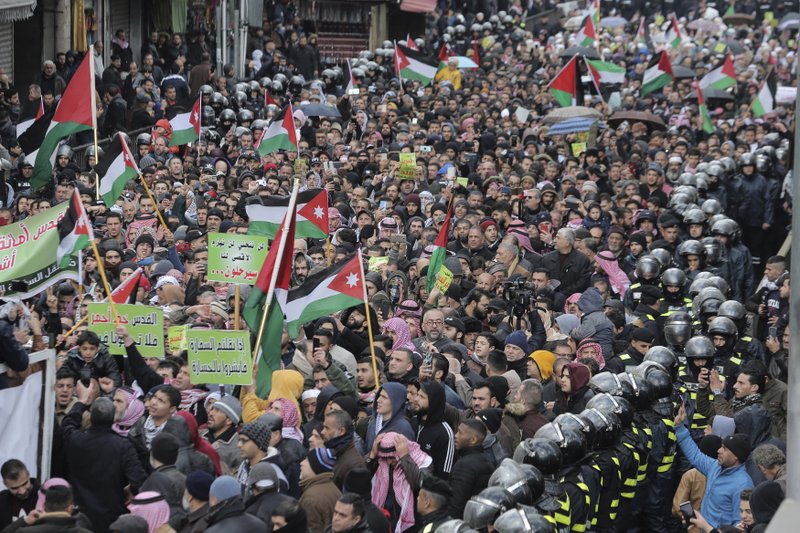 Protesters carry Jordanian and Palestinian flags and slogans during a protest against the Middle East peace plan proposed by US President Donald Trump, in the center of Amman, Jordan, Friday, Jan. 31, 2020. (Photo: AP)

The Palestinians have rejected the Trump plan, which heavily favors Israel and would allow it to annex all of its Jewish settlements, along with the Jordan Valley, in the occupied West Bank. The Palestinians were offered limited self-rule in Gaza, parts of the West Bank and some sparsely populated areas of Israel in return for meeting a long list of conditions.

Israel launched airstrikes on militant targets in Gaza early Friday, shortly after Palestinians fired three rockets into Israel, two of which were intercepted, the military said.

It said Palestinian militants had also launched “explosive balloons” toward Israel and that a sniper had shot an observational antenna. It said it struck targets linked to the Hamas militant group in response, including “underground infrastructure used to manufacture weapons.”

No one was wounded in either exchange of fire, but an Israeli woman dropped her three-week-old baby while running into a bomb shelter during the rocket attack, according to the United Hatzalah rescue service. The baby was hospitalized and is in moderate condition.

Gaza has been relatively calm in recent months as Egyptian and UN mediators have worked to shore up an informal truce between Israel and Hamas, which rules the coastal territory.

Hamas has curbed rocket fire and rolled back weekly protests along the frontier that had often turned violent. In return, Israel has eased the blockade it imposed on Gaza after the Islamic militant group seized power from forces loyal to the Palestinian Authority in 2007.

Hamas rejected the Trump plan and vowed that “all options are open” in responding to the proposal, but the group is not believed to be seeking another war with Israel.

Thousands of people took to the streets after Friday prayers in neighboring Jordan to protest the plan. Jordan, a close US ally and key player in previous peace efforts, has warned Israel against annexing territory. Jordan and Egypt are the only two Arab countries to have signed peace agreements with Israel.

The protesters waved Jordanian and Palestinian flags and burned Israeli flags despite the rainy weather. They chanted “Trump is a coward” and “Here we are, al-Aqsa,” referring to a Jerusalem mosque on a site sacred to Jews and Muslims.

In Lebanon, dozens of Palestinians gathered in the crowded Bourj al-Barajneh refugee camp after Friday prayers, carrying Palestinian flags and pictures of the al-Aqsa mosque. They chanted “We would die for Palestine to live” and “Revolution until we set Palestine free.”

“Palestine is not for sale, even if it were for millions upon millions. If (Trump) gave all of his money we wouldn’t sell to him,” said 58-year-old Fatima al-Khatib.

The plan anticipates $50 billion of investment in the future Palestinian state and describes several ambitious development projects, without saying where the money would come from.

Palestinians in the West Bank and Gaza have held small, scattered protests in recent days condemning the Trump initiative, and thousands gathered in Gaza on Friday, where they burned US and Israeli flags and portraits of Trump and Israeli Prime Minister Benjamin Netanyahu.

At least 14 Palestinians were wounded by Israeli gunfire in scattered protests along the security fence surrounding Gaza, according to the Palestinian Red Crescent medical service.

There were concerns that larger demonstrations and clashes would break out at the compound housing the al-Aqsa mosque, but Friday prayers there concluded peacefully. The Islamic trust that manages the site said an estimated 30,000 worshippers attended the weekly prayers.

The site, known to Muslims as the Haram al-Sharif, or Noble Sanctuary, is the third holiest in Islam, after Mecca and Medina in Saudi Arabia. Jews refer to the site as the Temple Mount because it was the location of the First and Second Jewish Temples in antiquity.

The hilltop shrine is managed by an Islamic trust under Jordanian stewardship, and day-to-day affairs are governed by informal understandings with Israel known as the “status quo.” Non-Muslims are allowed to visit during certain hours, but Jews cannot pray there.

In recent years, increasing numbers of religious and ultra-nationalist Jews have visited the site, stoking fears among the Palestinians that Israel intends to one day partition it and igniting clashes between Muslim worshippers and Israeli police. Israel has repeatedly said it has no intention of changing the status quo.

But the plan also says “people of every faith should be permitted to pray on the Temple Mount/Haram al-Sharif, in a manner that is fully respectful to their religion, taking into account the times of each religion’s prayers and holidays, as well as other religious factors.”

The site is part of the famed Old City in east Jerusalem, which Israel captured, along with the West Bank and Gaza, in the 1967 war. The Palestinians view east Jerusalem as their capital and want all three territories to form their future state.

Trump’s Mideast plan would situate the Palestinian capital on the outskirts of east Jerusalem, beyond the separation barrier built by Israel. The rest of Jerusalem, including the Old City, would remain Israel’s capital.

“A lot of people are still in a state of shock over the proposal,” said Christian Saunders, the acting head of the UN agency for Palestinian refugees, which provides basic services to some 5 million Palestinians scattered across the region.

“What will happen after that shock wears off, I don’t know. We certainly have serious concerns that it will result in an escalation in clashes and in violence. We have contingency plans in place in order to support during such times of unrest.”