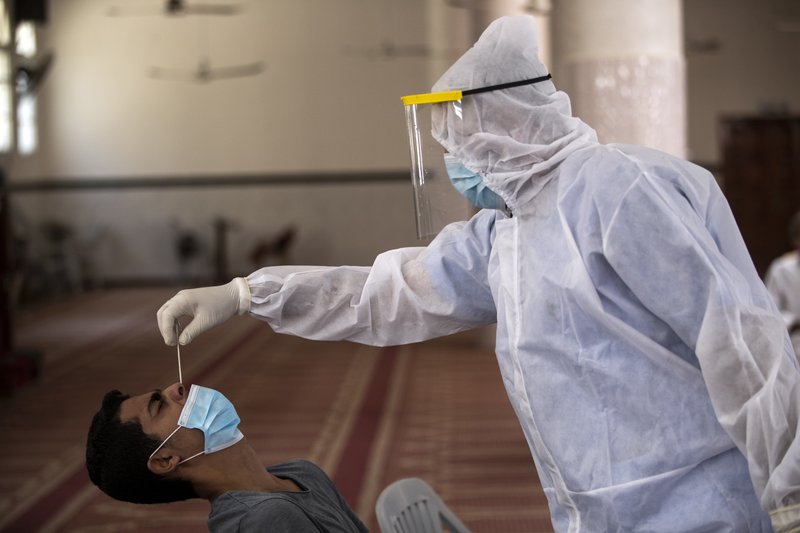 In this Sept. 21, 2020 file photo, a Palestinian paramedic wearing a full protective suit, takes a nasal swab to test for COVID-19 from a man, at a mosque in Gaza City. (Photo: AP)

Earlier, some 60,000 doses of Pfizer and AstraZeneca vaccines allocated to the Palestinians under the Covax scheme arrived at Ben Gurion Airport near Tel Aviv, according to an Israeli security source.

"Those vaccines being sent to the West Bank and Gaza will be critical tools in our fight against the pandemic and for socioeconomic recovery," his office quoted him as saying.

The vaccines arrive as Palestinian hospitals are overwhelmed with Covid-19 patients, in sharp contrast to neighbouring Israel which has fully vaccinated nearly 46 percent of its population with twin doses of the Pfizer/BioNTech vaccine.

The Palestinian Authority said that vaccination would begin on Sunday, primarily for those aged over 75, cancer patients and medical personnel.

Israel has provided 5,000 doses to Palestinian medical personnel, and vaccinated 90,000 Palestinians who work inside Israel or in Jewish settlements in the West Bank.

But while rights groups have urged it to extend its innoculation campaign throughout the territory, as the occupying power, Israel says health responsibilities there fall to the Palestinian Authority.

The United Arab Emirates has sent around 60,000 doses of the Russian vaccine Sputnik V to the Gaza Strip, a Palestinian enclave of two million inhabitants.

The Palestinians are also to receive 100,000 Chinese vaccine doses and nearly two million other portions through the Covax scheme, set up by the World Health Organisation (WHO) and the Alliance for Human Rights.

In Gaza, health authorities have confirmed more than 57,000 infected people, including more than 568 dead, since the start of the pandemic.

In the occupied West Bank, around 156,000 patients have been recorded, including more than 1,745 deaths.