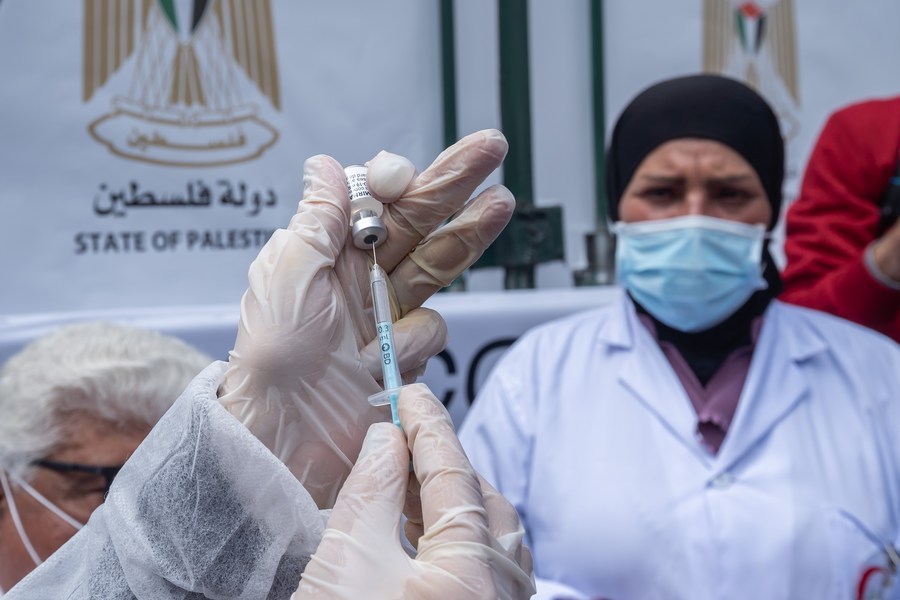 A health worker prepares the COVID-19 vaccine during a vaccination campaign in the West Bank city of Ramallah, on March 21, 2021. [Photo/Xinhua]

RAMALLAH -- "I'm lucky to be listed in the first batch of people to receive a jab of Chinese vaccine" against COVID-19, said Fares Hasouna, a 65-year-old Palestinian father of four from Ramallah, a Palestinian city in the central West Bank.

Hasouna is one of those who received the Chinese vaccine at al-Fajer primary school, which was turned into a medical center amid the rapid spread of the pathogen.

He told Xinhua that he decided to register via the health ministry's website as soon as he heard China would donate the much-needed vaccines to Palestine.

"I think the Chinese vaccine would be safe and effective. We know China has already succeeded in fighting the deadly virus," the elderly Palestinian man added.

In the last three days, many elderly Palestinians rushed to medical centers affiliated with the health ministry across the West Bank for an injection of China's Sinopharm vaccine to protect themselves against COVID-19.

Starting Thursday, the ministry scaled up its nationwide vaccination campaign, using the Sinopharm vaccine that China donated to Palestine on Monday to fight the pandemic in the country.

On March 21, Palestine launched a mass vaccination campaign against the novel coronavirus across the West Bank and the Gaza Strip.

The China-donated batch, which is considered the largest single donation of COVID-19 vaccines Palestine has received so far, will allow the inoculation of nearly 50,000 people, according to the health ministry.

"The credit goes to the tremendous efforts by Chinese medical workers who worked day and night to save people's lives here," Hasouna said.

"China has proven over the years that it is capable of inventing what is beneficial to humanity, including medicines and vaccines necessary to protect people from epidemics," said the 70-year-old retired teacher.

Sayyed told Xinhua that she had asked all her friends and relatives to register for their own jabs of the Chinese vaccine.

"It is a golden chance to protect ourselves ... and it is free of charge," she said.

Mutasim Muheisen, head of the Ramallah and Al-Bireh health directorate, told Xinhua that the Chinese vaccine is well received among the Palestinians.

He said China has been helping Palestine in its fight against the COVID-19 pandemic since its outbreak in the country in March last year.

China donated several batches of medical supplies to Palestine in 2020, and a Chinese team of medical experts was sent to the country in June to support its fight against the virus, according to the Palestinian health official.

The Chinese vaccine "came at a right time to fill the vaccine shortage that the Palestinian health ministry has suffered," Muheisen noted.