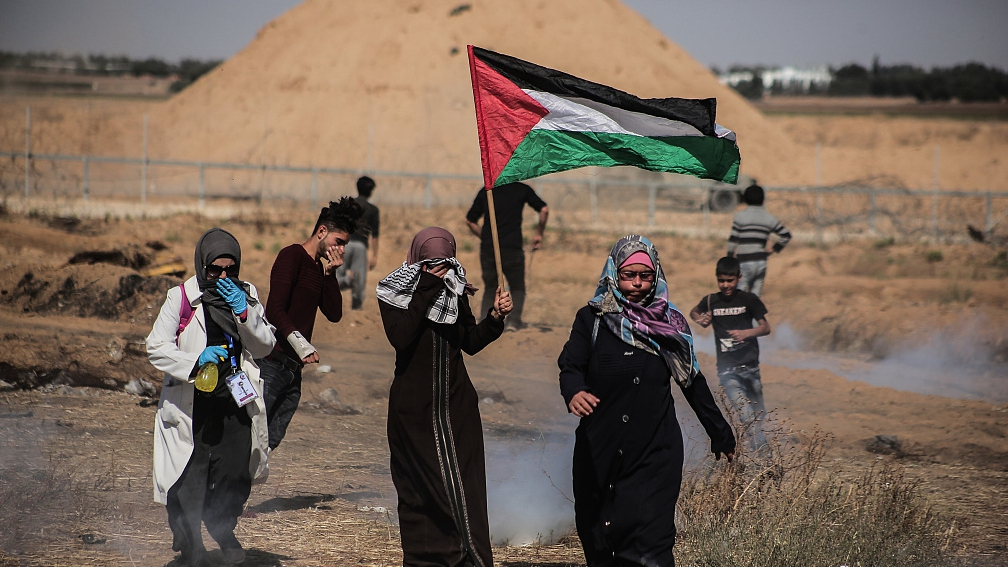 A Palestinian woman seen holding a flag during the clashes with Israeli forces in Khan Yunis, Gaza, May 15, 2019. (Photo: VCG)

Palestinian President Mahmoud Abbas on Saturday reiterated his staunch rejection of a US economic peace plan as Washington unveiled details of its long-awaited initiative, saying a political solution must come first.

The United States said the economic aspect of its Middle East peace plan to be presented next week in Bahrain aims to raise more than 50 billion US dollars for the Palestinians and create one million jobs for them within a decade. The Palestinians are boycotting the event.

"The economic situation should not be discussed before the political one. And as long as there is no political (solution), we do not deal with any economic issues," Abbas told the central committee of his Fatah faction in the occupied West Bank city of Ramallah.

The "peace to prosperity" plan calls for creation of a global investment fund to lift the Palestinian and neighboring Arab state economies, according to US officials and documents reviewed by Reuters.

One proposal is for the construction of a five billion US dollars transportation corridor to connect the West Bank and Gaza.

The Trump administration hopes that wealthy Gulf states and nations in Europe and Asia, along with private investors, would foot much of the bill, Kushner told Reuters.

There are strong doubts whether potential donor governments would be willing to open their checkbooks anytime soon, as long as the thorny political disputes at the heart of the decades-old Palestinian conflict remain unresolved.

Hanan Ashrawi, a veteran Palestinian negotiator and member of the executive committee of Palestine Liberation Organization (PLO), said only a political solution that ended Israel's occupation of the Palestinian territories would solve the conflict.

"If they really care about the Palestinian economy they should start by lifting the siege of Gaza, stopping Israel stealing our money and our resources and our land and opening up our territorial waters, our air space and our borders so we can freely export and import," she said.

She said the Trump administration's stance was an "entirely wrong approach," adding: "They can end the occupation, which is the most basic requirement for prosperity. There can be no prosperity under occupation."

The Palestinians have refused to talk to the Trump administration since it recognized Jerusalem as the Israeli capital in late 2017. They consider the eastern part of the city the capital of their own future state.