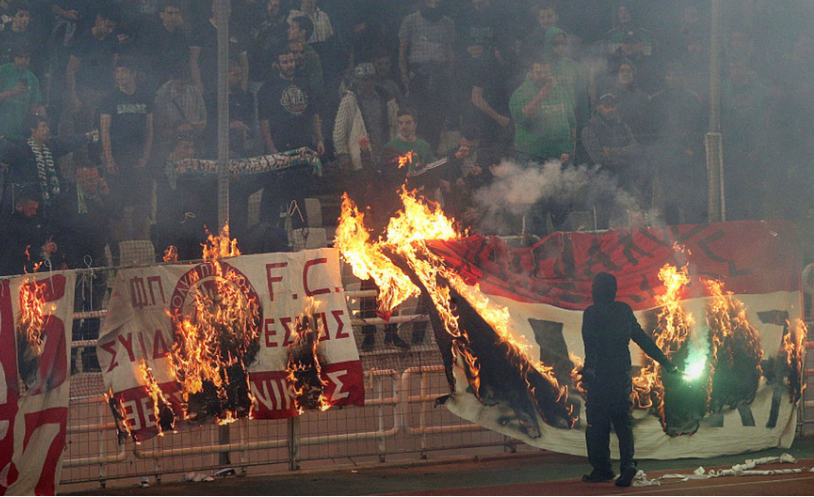 The Greek Super League game between Olympiakos Piraeus and the visiting Panathinaikos at the OAKA Stadium on Sunday was abandoned in 70 minutes after Panathinaikos attacked players and clashed with home fans.

The Greek Football Federation (HFF) took precautions before the game by inviting German referee Marco Fritz to avoid controversial calls in the Athens derby. However, in four minutes after the kickoff, some 30 Panathinaikos fans rushed into the filed and attacked home players on the bench. The game was stopped for about eight minutes.

Things escalated in the second half as Miguel Angel Guerrero scored for Olympiakos Piraeus in the 53rd minute to help the home team lead 1-0. Panathinaikos fans set banners on fire and began to throw fireworks at the opponent's fans. In response, police tried to disperse Panathinaikos fans with tear gas.

Smoke from tera gas overcast the field, making it impossible to continue for both players and fans. In the end, referee Fritz abandoned the game in the 70th minute. Olympiakos Piraeus were awarded the victory of the game 3-0. By contrast, Panathinaikos may face fines, closed-door games and even point deduction.

Though Panathinaikos have won title of Greek top league 20 times, the club suffered from financial problems in recent years. In April, 2018, they were banned from attending any European competition for three seasons by UEFA's Club Financial Control Body as Panathinaikos had unpaid bills.

This was not the first time for an Athens team to get into trouble related to violence, either. In February, AEK Athens were banned by the UEFA Control, Ethics and Disciplinary Body (CEDB) from participating in any European competition for the coming two years because AEK fans threw petrol bomb and flares into the stands housing visiting team's fans in the UEFA Champions League game against Ajax at the Olympic Stadium of Athens in November, 2018.