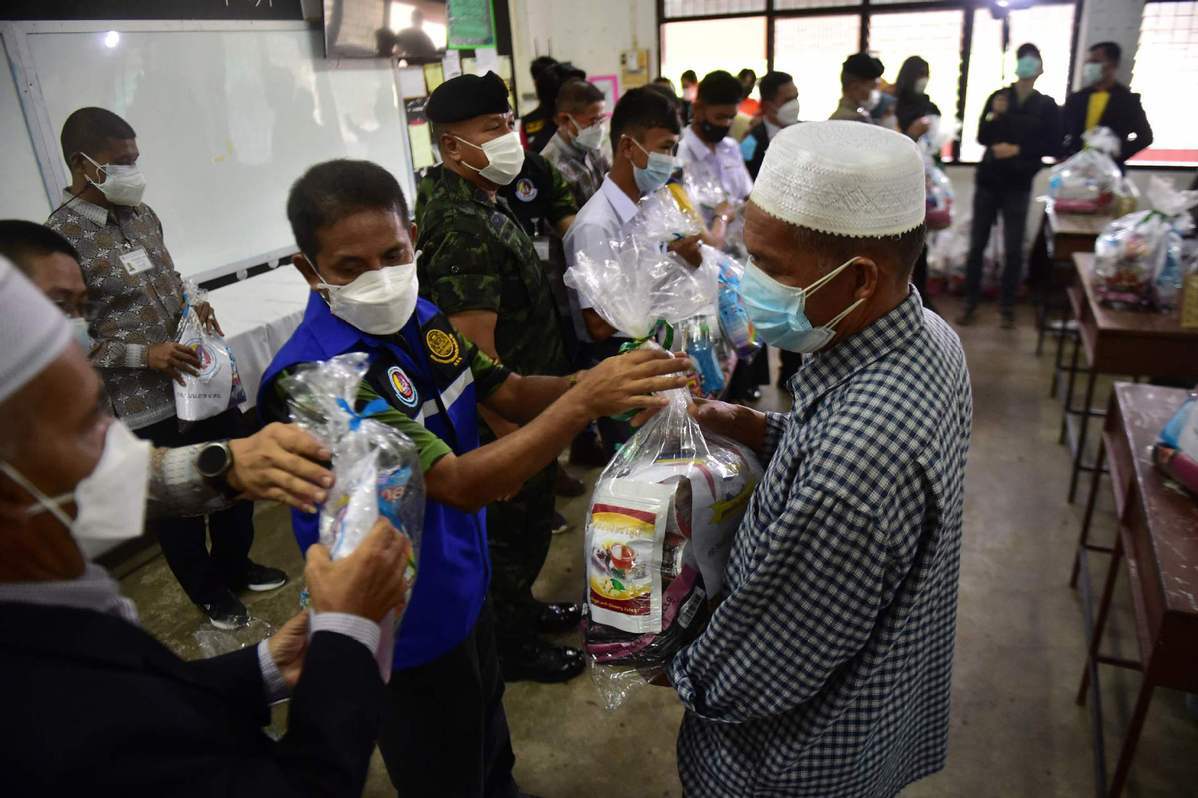 Food aid and other essential items are distributed to people affected by the economic impact of Thailand's coronavirus lockdown measures at the Attarkiah Islamic School in Thailand's southern province of Narathiwat on Aug 17, 2021. (Photo: Agencies)

COVID-19 will remain a big challenge for the stability of the Thai government even though the country's Prime Minister, Prayut Chan-o-cha, is well-placed to survive his third no-confidence vote, experts say.

"The upcoming no-confidence vote will not bring down Prayut's government because now it still has strong support from businesses, especially the CP Group," said Titipol Phakdeewanich, dean of political science at Ubon Ratchathani University in Thailand. The Charoen Pokphand Group is one of Thailand's biggest conglomerates.

The country's opposition parties, headed by Sompong Amornvivat, leader of the Pheu Thai Party, submitted a censure motion targeting Prayut and five cabinet ministers last Monday, according to the Bangkok newspaper The Nation. The main focus was on the government's COVID-19 responses, regarded as unsatisfactory, its slow vaccine distribution, alleged related corruption and mismanagement of the economy.

The censure debate is expected to take place this month or early next month. It will be the third no-confidence test for Prayut's government since a general election in 2019.

The number of COVID-19 cases has grown, so "it is understandable that people are frustrated with Prayut since he is the head of the government," said Paul Chambers, lecturer and adviser for international affairs of the Centre of ASEAN Community Studies of Naresuan University in Thailand.

But Chambers, echoing Titipol, said Prayut will "most assuredly "survive again for the third time because his coalition government has more MPs than the opposition.

"If another government was in office there is no guarantee that a COVID-19 policy would be so much more effective," Chambers said.

Stithorn Thananithichot, a political scientist with King Prajadhipok's Institute, a think tank affiliated to the Thai parliament, said: "The strategy the opposition uses is that they select all the big names from the key main party of the coalition." This approach will unite the coalition more than create conflicts, he said.

The no-confidence vote will make people outside Parliament reevaluate the government's performance once again, Stithorn said, adding that how Prayut's government handles the COVID-19 outbreak will be critical for the remainder of his term.

Thailand has had about 20,000 new daily COVID-19 cases recently, data from the health ministry showed. The national tally crossed 1 million on Friday, with more than 960,000 cases reported in the latest wave that began in April. The government has decided to extend lockdown measures until the end of this month. The worsening pandemic fueled by the Delta variant and extended lockdown measures have cast a shadow over the country's economic performance.

Last Monday the National Economic and Social Development Council, the state economic planning agency, cut its full-year growth projection for this year to between 0.7 and 1.2 percent from a previous outlook of between 1.5 and 2.5 percent.

The Governor of the Bank of Thailand, Sethaput Suthiwartnarueput, said the country will need a further 1 trillion baht ($29.9 billion) to help the virus-hit economy, according to Reuters.

Titipol said he expects the COVID-19 situation to improve as the government is now working to obtain more vaccines.

The health ministry said last week that it will buy an additional 12 million doses of China's Sinovac vaccine to combat the Delta variant, according to the Bangkok Post. The decision came after a study by the ministry showed the Sinovac vaccine is 98 percent effective in preventing critical illness and death caused by COVID-19 and 72 percent effective in stopping COVID-19 infections.