Fear of the coronavirus, mixed with chronic pollution, has spoiled the party for hundreds of millions of Indians celebrating the biggest Hindu holiday of the year on Saturday. 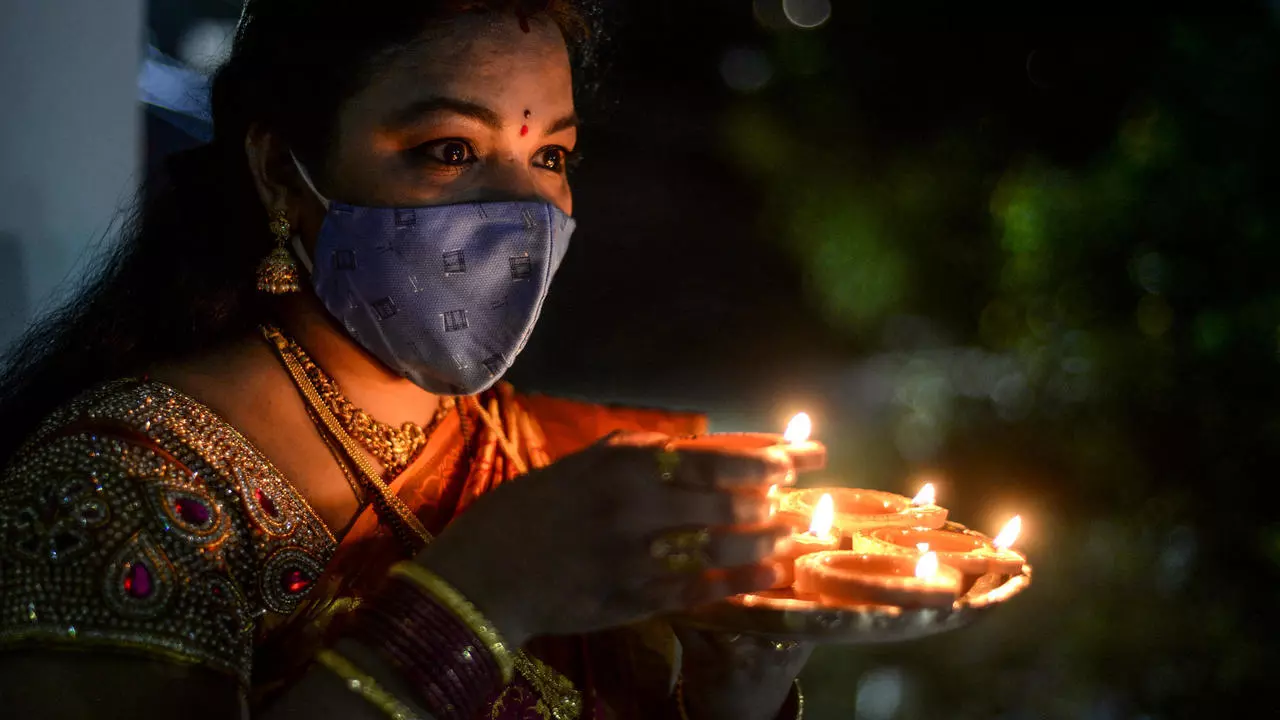 A Hindu devotee wears a mask as she places earthen lamps or 'diyas' at her home on the eve of Diwali. (Photo: AFP)

Diwali is meant to be the festival of light, but the pandemic has clouded the future for many in the country of 1.3 billion.

The smog-shrouded capital New Delhi has banned firecrackers because of sky-high pollution levels and, while people still thronged markets, traders said Covid-19 had scared them off spending.

With 8.7 million cases, India has the world's second-highest coronavirus infection count behind the United States. About 130,000 people have died from Covid-19 in India since February and Delhi is going through a new surge with nearly 8,000 new cases a day.

Experts have blamed the rise on Diwali crowds, and -- although traditional revelry was muted -- there was no sign that people were staying at home.

Engineer Rahul Randhawa, 27, said the throngs were "the total opposite" of what he expected to see when he returned from the United States.

"There are major jams on the street... and there are huge crowds in markets," he said.

However, the crowds are being selective. Cinemas are open but remain empty. Restaurants say they are struggling to get people to come in.

Mahinder Kumar, who sells flowers outside the Jhandewala temple, one of the oldest in Delhi, said that normally there are huge queues for Diwali. "This year it's nothing - almost empty."

"Our business has been affected badly. We have hardly sold any flowers this year."

The eight weeks up to Diwali can account for 40 percent of some traders' annual business and it is considered an auspicious time to buy gold.

But the lights were off at Vineet Garg's gold and jewellery store near the central Connaught Place, despite an "open" sign on display.

"It is a waste of electricity to put the lights on," he said. "People are not buying in shops. The business I am doing is online. They are too worried to have fun."

In Mumbai, markets were bustling with shoppers buying lights and food but shopkeepers said sales were no better than on an average day.

"It is a dull Diwali," said Raju Harijan, 35, who has a food store in north Mumbai. "Usually every year, sales would peak now but this year, even survival has become tough."

Bank worker Sonam Choudhary acknowledged that people were "scared" of the coronavirus and "adjusting to the new normal". She said families would celebrate Diwali "with all the precautions".

Prime Minister Narendra Modi and most of his ministers put out traditional Diwali greetings. "May everyone be prosperous and healthy," Modi told his 63.5 million Twitter followers.

But the government is struggling to kick-start an economy that is expected to shrink by nearly 10 percent this year because of the pandemic crisis. Millions across the country have lost their jobs.

The government this week announced incentives worth more than $35 billion to boost employment, consumer demand, agriculture and manufacturing. Since May, it has spent about $300 billion on stimulus measures.

But Garg said there would be no point putting the lights on in his jewellery store until a coronavirus vaccine is available to all. "The new normal is all dark for now," he said.