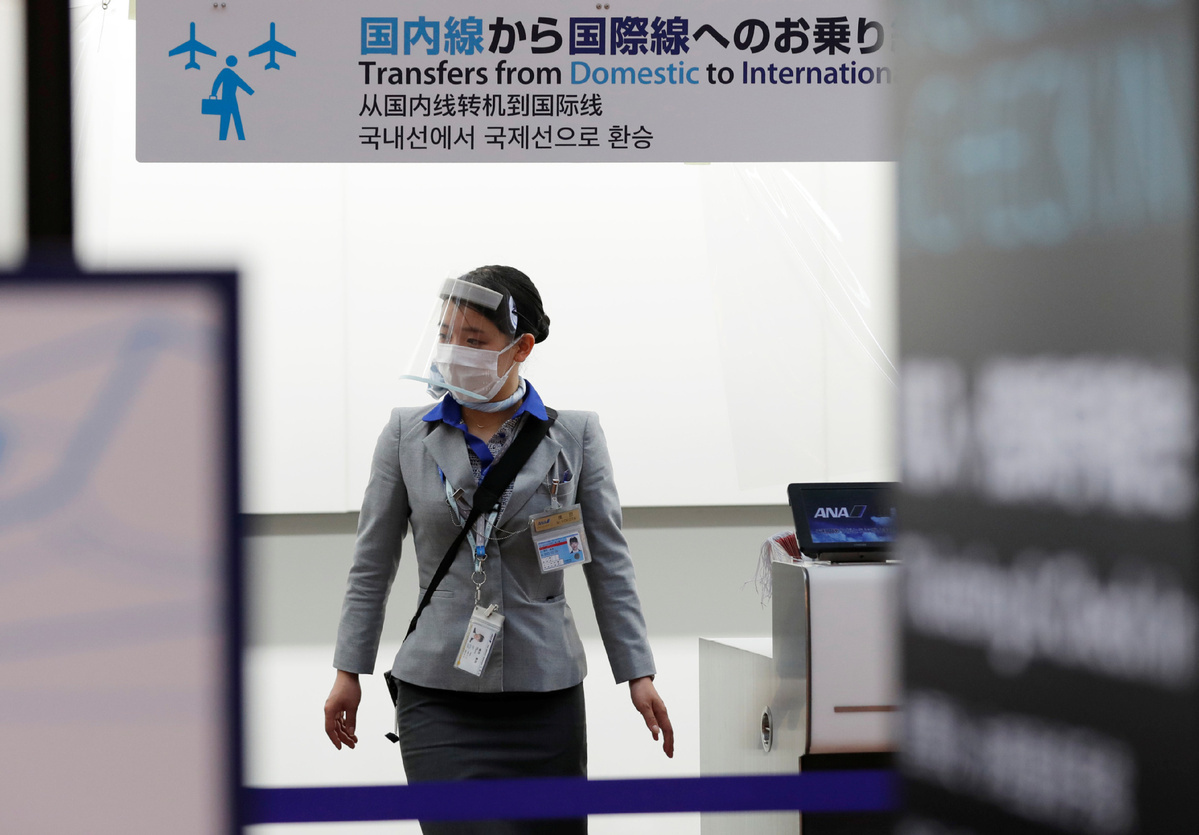 A staff member of All Nippon Airways wearing a protective mask and a face shields works at a check-in counter amid the COVID-19 outbreak at Haneda airport in Tokyo, Japan June 4, 2020. [Photo/Agencies]

The COVID-19 pandemic has had a big impact on security in the Asia-Pacific, and countries in the region need to form a broader collaboration mechanism to tackle the challenges presented, experts who took part in an online forum said.

"Security and cooperation dialogue among Asian countries, such as China, Japan, the Republic of Korea and India, is needed for the stability in Asia and cooperation after COVID-19," said Surakiart Sathirathai, deputy prime minister of Thailand from 2005 to 2006.

The video discussion was part of the 2020 World Peace Forum virtual conference held by Tsinghua University in Beijing on Tuesday and Wednesday.

The pandemic has diminished multilateralism and international collaboration, including that conducted in the United Nations system, but has promoted regional collaboration to some extent, Sathirathai said. For example, regional organizations had been setting up mechanisms to help each other deal with COVID-19 since last month, he said.

Developing regionalism can help promote multilateral collaboration and discourage unilateralism, and regional organizations should be strengthened to play a more important role for peace dialogue, fostering post-COVID-19 collaboration, he said.

"Regionalization of multilateralism is the way forward for peace, security and economic cooperation. It is multilateralism that will lead all of us to a shared future of mankind."

COVID-19 has drawn the world's attention to food and health security, changing people's perceptions of regional security, he said.

"Technology for food safety, medical supplies and medicine development… will be the focuses of regional cooperation (in the future). Accordingly, major powers should strengthen the architecture to increase dialogue in the areas of food, health, security and economic recovery."

Shivshankar Menon, a former Indian diplomat, said the pandemic had accelerated the threat to security in the Asia-Pacific region, such as decoupling and reversing globalization, and stoking competition between major powers.

The pandemic has diminished all of the major powers, putting leadership under increasing external and internal pressures, said Menon, who was India's national security adviser from 2010 to 2014.

All countries now face heavier economic, political and other pressures, making it more difficult for them to deal with security issues, he said. In addition, a bilateral or multilateral security structure in the Asia-Pacific region in the near future had become more unlikely.

Menon echoed Sathirathai's opinion on the definition of regional security and suggested expanding its range to a broader one, as the pandemic has involved more "nontraditional security issues", such as climate change and hygiene.

He called for "issue-based coalitions" within the region because it would be impossible to build a single architecture within which to deal with all issues, especially nontraditional issues that would require collaborative solutions.

He Yafei, a former Chinese viceminister of foreign affairs, outlined several key points that should be put on top of the security threat list for the Asia-Pacific region.

Any possible deterioration of tension among major powers needs to be prevented because it could lead to military confrontation, he said, suggesting that crisis management or dialogue within a consultation mechanism to deal with crises has to be put in place.