WORLD Pandemic has exposed unpreparedness of US

Pandemic has exposed unpreparedness of US 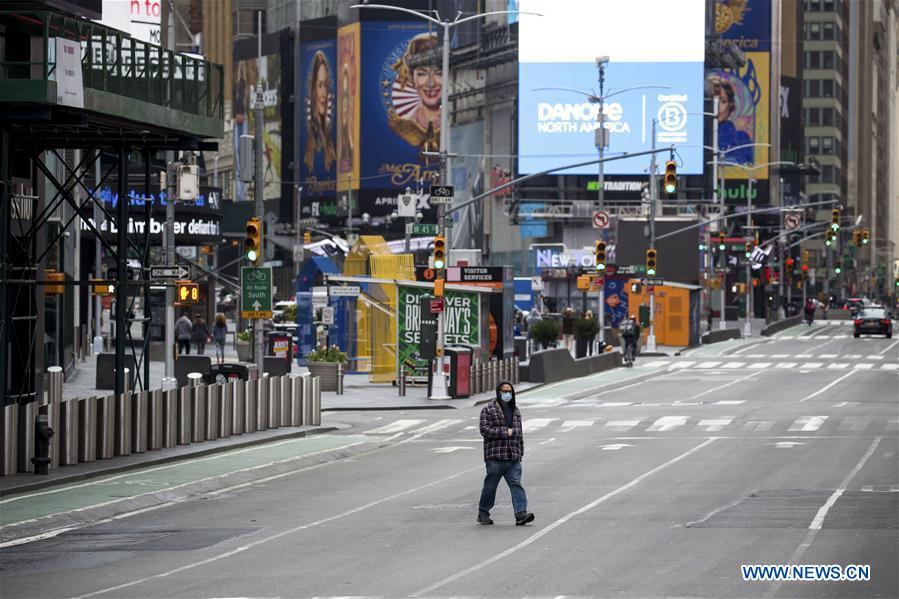 A man wearing a face mask walks on the Times Square in New York, the United States, on April 27, 2020. (Photo: Xinhua)

A surge of stigmatizing voices from the United States and some Western European countries clouds the world over the sudden but common test brought upon all human beings by the novel coronavirus.

Such noises grow louder as the US lays bare its failure to effectively cope with the pandemic while China manages to curb domestic cases, with Wuhan clearing its last hospitalized patient on April 26.

Not long ago, US officials were still boasting about their control of the virus. It is most disheartening that soon afterward, the pandemic exposed the unpreparedness of the US. Their arrogance that "the virus is Asian" and their own health systems are stronger led them astray.

Among those leading the crusade against China are US Secretary of State Mike Pompeo, who has been attacking China on issues ranging from the name of the virus to its origin, from its donations to sharing of information, without showing any evidence for the blatant accusations.

A 57-page strategy document issued by the National Republican Senatorial Committee, disclosed by US media, employs multipronged assaults against China and shows the world how US politicians are pushing to scapegoat China and spreading fake news.

If US politicians feel no shame in ignoring the truth, the echoing attitude of some Western media against China suggests the West always seeks to find justification for all its actions, and doubts or even denounces others for any progress.

Fox News seems to be in line with Republican guidelines in circulating untrue accusations against China. The rather ludicrous legal suit against China for COVID-19 damages could ripen to threats to extort China.

However, the media outlets that prop up a blame game by the world's single hegemonic power are forgetting that it was the US that is alleged to have engaged in bacteriological warfare against Korean and Chinese soldiers during the Korean War (1950-53) and against the Vietnamese (1955-75).

It was the US and some other Western powers that framed people in Iraq and Syria for alleged possession of chemical weapons.

Yet the country that was the first to confront the coronavirus and the first to successfully combat the new challenge through its own initiative is today being condemned as the cause of the pandemic.

The fact that China's success in containing the pandemic and its assistance to other sufferers leave politicians more upbeat in attacking China explains why the West equates leadership with some form of superiority and dominance, an outlook that lingers to this day.

From these attacks, we see the harbingers of extreme bigotry, blind superiority, discrimination and contempt of others by selfish politicians.

Those strongmen and so-called intelligentsia in the West cannot accept China or any other Asian or African country leading in charting the course of human destiny. They cannot conceive of the idea that the awaited emergence of China as an economic power should be welcomed as an epochal change in the history of mankind.

To the developing world, the most visible trace brought about by Western empires is the subjugation and exploitation of other peoples. China happens to be the top target for its rise, and more so, for its success in beating COVID-19 that so embarrasses the world's sole superpower.

Such longing for continuous exploitation of others has to be taken as a residue of slavery, colonialism and imperialism championed by the Western powers for centuries. The practice has brought untold riches to the capitalists that exacerbate underdevelopment, poverty, hunger, disease and an incessant struggle for survival.

Like the virus that came and will be yoked, such political toxins should be buried by us, the modern Homo sapiens that have withstood many viruses, and will be more interconnected, more resilient in health access and more equal among peoples.

The author is a Manila-based political analyst and columnist for The Manila Standard. The views do not necessarily reflect those of China Daily.