WORLD Pandemic has hit Britain's most vulnerable families the hardest

Pandemic has hit Britain's most vulnerable families the hardest 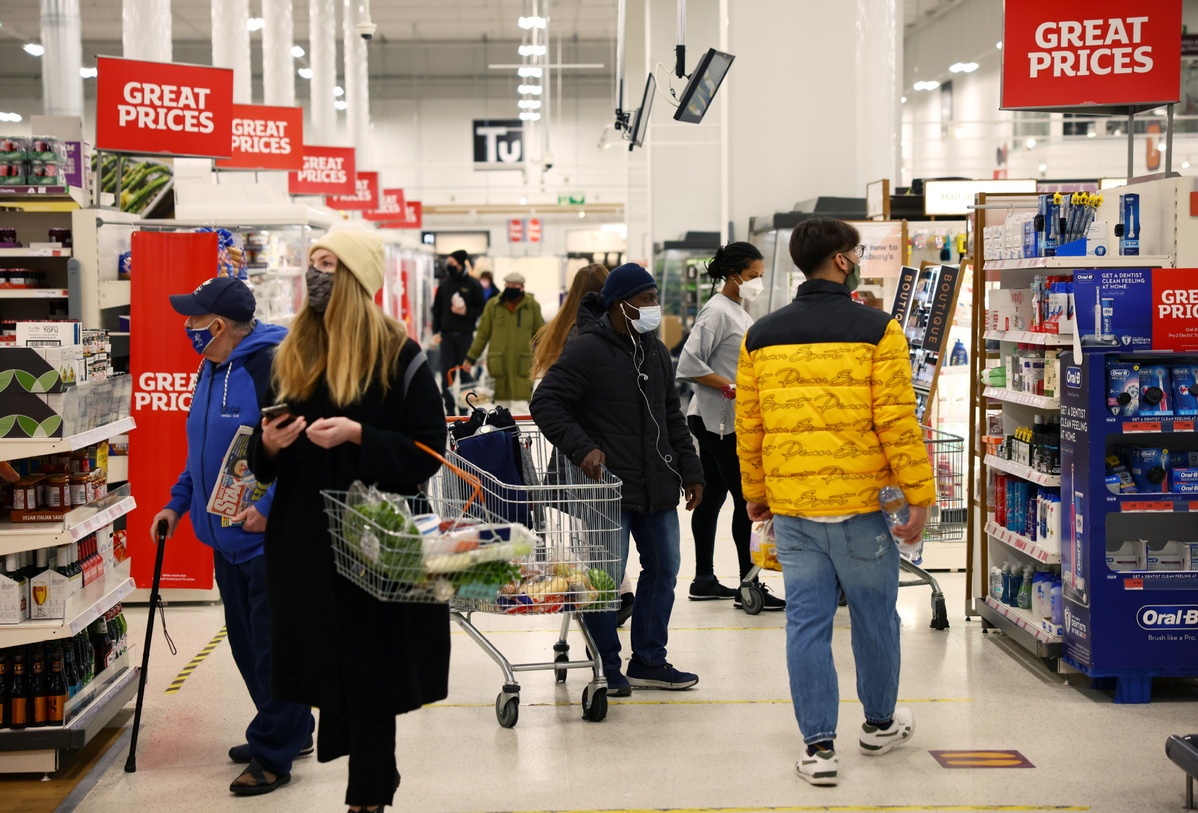 People shop at a Sainsbury's supermarket, amid the coronavirus disease (COVID-19) outbreak, in London, Britain on Jan 12, 2021. (Photo: Agencies)

A study by the University of York and the Resolution Foundation think tank has revealed the additional cost of food, energy and home-schooling has seen the expenditure of low-income families in the United Kingdom rise during the pandemic.

The survey, called Pandemic Pressures, was produced by the foundation, which focuses on the living standards of those on low and middle incomes, and York's Covid Realities research project.

More than one in three low-income households with children have increased their spending, with just half that amount managing to cut expenditure.

Reasons include the additional cost of children being at home all the time, increased costs resulting from home schooling, and the requirements of shielding and social distancing changing shopping habits.

"The pandemic has forced society as a whole to spend less and save more. But these broad spending patterns don't hold true for everyone," said Mike Brewer, chief economist at the Resolution Foundation.

"The extra cost of feeding, schooling and entertaining children 24/7 means that, for many families, lockdowns have made life more expensive to live on a low income."

Ruth Patrick, who leads the research program, said the idea of saving money during the pandemic was "a world away" from many people's reality.

"Parents have found their spending increase, as some of the usual strategies they use to get by on a low income, shopping around for the best deal, going to families and friends for a meal when the cupboards are empty, have become suddenly impossible," she said.

Elsewhere, as it was revealed that the UK has suffered its largest increase in deaths in a single year since 1940, pressure is growing on police chiefs to enforce lockdown measures more strictly.

Provisional data from the Office for National Statistics shows that last year, almost 697,000 deaths were registered, as opposed to an average closer to 606,000 between 2015 and 2019.

The chief executive of the NHS Confederation, which represents leaders in the National Health Service, told the BBC that hospitals are now dealing with the results of "many, many weeks of the spread of the virus" because of inadequate measures being put in place.

"What we're seeing right now is the fact that actually the steps that were taken in the autumn and before Christmas weren't effective," said Danny Mortimer. "Our following of the rules in November time was much, much weaker than it was in March."

These remarks came as the UK's top police officer, Metropolitan Police Commissioner Cressida Dick, called it "preposterous" anyone would claim to be unaware of preventative measures to slow the spread of the virus.

Amid reports of illegal private gatherings, she told The Times newspaper rulebreakers were increasingly likely to face fines.

"We will still be engaging, explaining and encouraging but those who break the rules or refuse to comply where they should without good reason will find officers moving much more quickly to enforcement action," she wrote.

Elsewhere, many university students unable to return to their accommodation because of lockdown have been offered a 50 percent reduction in their residency fees.

Unite Students, the UK's largest student accommodation provider, said it expected around two-thirds of tenants to apply for the rebate.

Some universities, including Cambridge and Warwick, have already said they will not ask students in university-owned accommodation to pay for it while they are unable to use it, but there has been criticism of the lack of a coordinated approach to the issue.

"It is simply unacceptable that students are being told to not live in housing they have paid for, on public health grounds, yet are receiving no government support," said Hillary Gyebi-Ababio, vice-president of the National Union of Students.

French authorities have refused to rule out the possibility of a third lockdown in a bid to contain the latest variant of the COVID-19 virus, which has already proved so damaging in the UK.

"By midweek, we'll know the size of the enemy and we'll have to take appropriate measures," Arnaud Fontanet, a member of the government's scientific council, said in a television interview.

Philippe Froguel, a professor at Imperial College London and at Lille in France, told the Financial Times he feared the variant was already established in France and the country was ill-prepared for it.

As Portugal prepares for a presidential election on Jan 24, incumbent president Marcelo Rebelo de Sousa has tested positive for the novel coronavirus. The 72-year-old, who took office four years ago, is seeking a second term.