Despite growing vaccine access, January is looking grim around the globe as the virus resurges and reshapes itself from Britain to Japan to California, filling hospitals and threatening livelihoods anew as governments lock down businesses and race to find solutions. 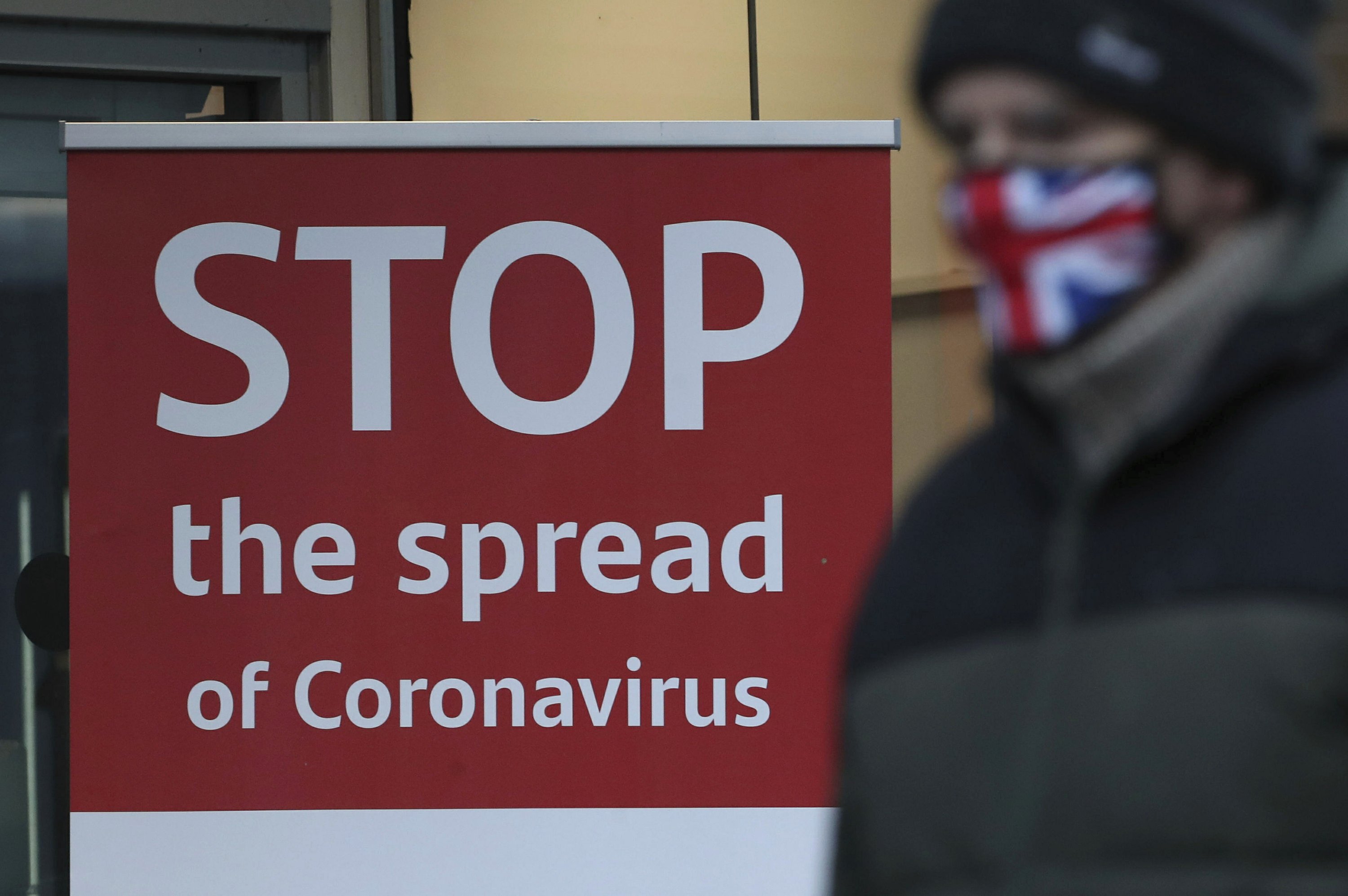 A man wearing a British union flag face mask walks past a coronavirus advice sign outside a bank in Glasgow the morning after stricter lockdown measures came into force for Scotland, Tuesday Jan. 5, 2021. (Photo: AP)

Mexico City's hospitals hold more virus patients than they ever have. Germany reported one of its highest daily death tolls to date Tuesday, and South African undertakers are struggling to keep up with virus mortalities. Even pandemic success story Thailand is fighting an unexpected wave of infections.

And as doctors face or brace for rising numbers of COVID-19 patients after end-of-year holiday gatherings, more and more countries are reporting cases of a new, more contagious virus variant that has already swept across Britain.

January is going to be "a tough one," Dr. Margaret Harris, a spokeswoman for the World Health Organization, told The Associated Press. "This idea that seems to be 'Ah, we're all sick of it. We want to look at something else. Oh, this doesn't apply to me' .... That's got to go away. It really is all hands on deck."

While Britain rolled out a second vaccine this week and some U.S. states are starting to give booster shots from the country's first vaccine, access to inoculations globally is sharply unequal. The supply also isn't remotely close to meeting the massive demand needed to fight a microscopic foe that has already killed over 1.85 million people.

England is facing a third national lockdown that will last at least six weeks, as authorities struggle to stem a surge in COVID-19 infections that is threatening to overwhelm its hospitals.

The two leaders said the restrictions were needed to protect the National Health Service amid the emergence of new, more contagious virus variant that has sent daily infections, hospitalizations and deaths soaring.

The NHS "is going through probably the toughest time in living memory," said Siva Anandaciva, chief analyst of the King's Fund think-tank. He said some U.K. emergency rooms have waiting times of 12 hours and doctors were treating people lined up in ambulances outside.

Elsewhere in Europe, Italy extended its Christmas lockdown, Spain is restricting travel and Germany's chancellor was meeting Tuesday with state governors to decide how long to extend the latest lockdown. Cyprus and France are likely to announce tougher measures Thursday, and Ukraine is closing schools and restaurants starting Friday.

In Latin America, some warn the worse is yet to come.

Mexico's capital has more virus patients than at any point in the pandemic and is flying in doctors from less hard-hit states. Its beach resorts are readying for more cases after thousands of U.S. and European tourists visited over the holidays.

"Probably in the third week of January, we are going to see the system stressed more, that there will be more ambulatory cases and cases requiring hospitalization," said Dr. Mauricio Rodriguez of Mexico's National Autonomous University. He blamed the rise on fatigue with social distancing, mixed messages from public figures and Mexicans lowering their guard during the holidays.

Beach parties were blamed for surging cases in Argentina, notably among young people, and the government is considering new restrictions.

The pandemic is even reaching countries that seemed to have the virus under control.

Thailand is facing an unexpected surge that has infected thousands in a few weeks blamed on complacency and poor planning. The government is locking down large parts of the country, including the capital Bangkok, and considering tougher measures.

"We don't want to lock down the entire country because we know what the problems are, so can you all lock down yourselves?" Prime Minister Prayut Chan-o-cha pleaded with his nation.

Japan getting ready to declare a state of emergency this week, beefing up border controls and speeding up vaccine approval after a surge of cases around New Year's Eve.

Italy has been trying to control its latest surge with local measures. After two months of restrictions, infections have plateaued but hospitals are still under pressure, hundreds of people are still dying every day and officials fear cases will surge again due to holiday get-togethers.

And holiday worries aren't over now that 2021 has arrived.

Pope Francis abandoned an annual ritual of baptizing babies in the Sistine Chapel tied to Wednesday's Epiphany holiday. Orthodox Christian countries like Russia and Greece could face more infections after they celebrate Christmas on Thursday. And China is closing schools early ahead of next month's Lunar New Year holiday, telling migrant workers not to go home and tourists to avoid Beijing.

Vaccines offer an exit, but are getting off to a slow start in many places. Some U.S. states are struggling to secure enough shots and organize vaccinations. The Netherlands has come under heavy criticism for being the last European Union nation to start inoculations, which it will do Wednesday. Australia isn't planning to do so until March. And most poorer countries are even farther behind.

Yet India offers a glimmer of hope. Its infection rate is down significantly from a September peak, and the country is kicking off one of the largest inoculation programs in the world, aiming at vaccinating 300 million people by August.