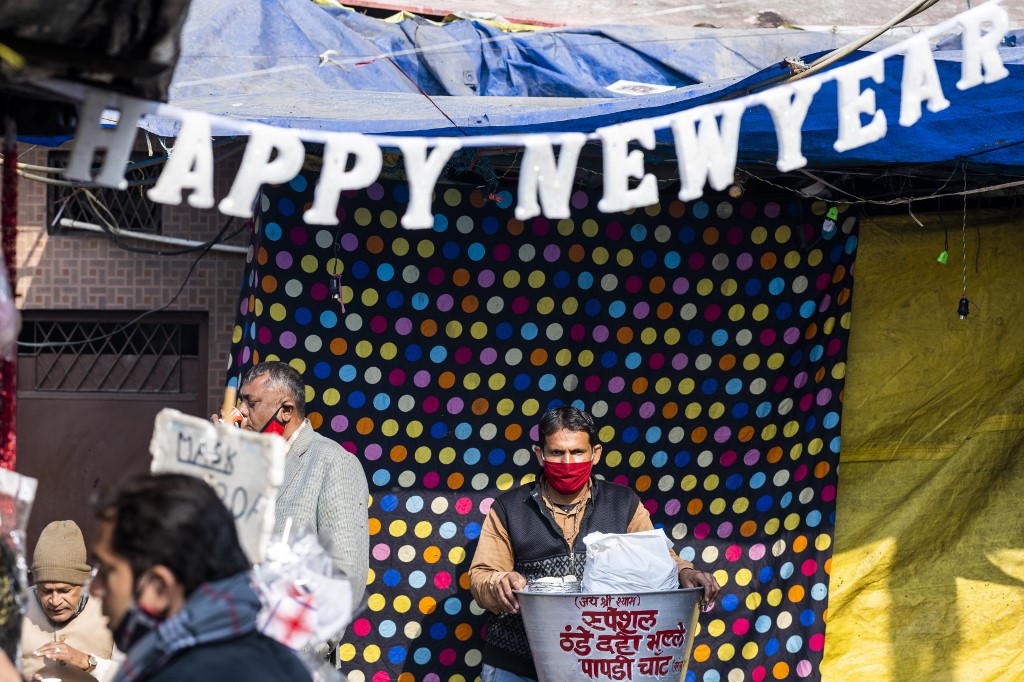 A vendor (back) waits for customers near a stall selling decorations on New Year's Eve in New Delhi on December 31, 2020. (Photo: AFP)

NEW DELHI, Dec. 31 (Xinhua) -- India witnessed a year of calamity and economic recession as the South Asian nation remained the second worst-hit country by the COVID-19 pandemic with the tally standing at 10,266,674 and death toll at 148,738 by the last day of the year.

The 68-day long lockdown, beginning from March 25, had a cascading effect on India with a population of over 1.3 billion, as almost all the manufacturing activities came to a grinding halt, unemployment shot up like never before, and people were left with minimal spending power at their command.

As per the official figures, the country's Gross Domestic Product (GDP) slipped by a sharp 23.9 percent during the first quarter of the current Financial Year (April 2020-March 2021) .

With unemployment and uncertainty staring into their faces, hundreds and thousands of labourers walked down hundreds of miles to their respective homes, with absolutely no mode of transport available.

Barring agriculture, only a few essential services such as food items and medicines were allowed during this period as the federal government tried to curb the spread of the virus across the country.

The construction sector witnessed a drop of a whopping 50.3 percent, while the manufacturing sector saw a 39.3 percent fall. Besides, electricity, gas, water supply and other utility services slipped by seven percent, and trade, hotels, transport, communication and services related to broadcasting contracted by 47.0 percent.

Only the agriculture, forestry and fishing industry witnessed a growth of 3.4 percent in the April-June quarter.

Signaling a technical recession for the first time in India's history, the country's GDP for the subsequent quarter contracted by 7.5 percent, though defying the most expected outcome of -12 percent.

The official figures showed that during the 2nd quarter, the manufacturing industry grew by 0.6 percent while the electricity, gas, water supply and other utility services segment grew by 4.4 percent. Agriculture, forestry and fishing industry grew at a constant pace of 3.4 percent.

The more-than-expected economic recovery was possible by stimulus packages announced by the federal government, particularly aimed at boosting the Micro, Small and Medium Enterprises (MSMEs) which are considered as the backbone of India's economic activity.

The pandemic further aggravated unemployment, one of the key problems the country has been facing over decades as hundreds of thousands of people, particularly the labourers and middle-level workers, were left jobless with no manufacturing or industrial activity in place.

It further came down to 7.4 percent in July, lower than the average unemployment rate of 7.6 percent during the entire 2019-20, but slightly higher than the 7.3 percent recorded a year ago, in July 2019.

India's unemployment rate for the month of November stood at 6.51 percent, the lowest since September 2018 when it was 6.47 percent, as per the figures provided by the Centre for Monitoring Indian Economy, a private think tank.

With the economy virtually coming to a standstill post the 68-day lockdown, the reopening of manufacturing sector gave a much-needed boost, as the automotive sector played a sheet anchor role.

Due to a rise in consumer durables production, India's industrial output grew at 3.6 percent in October, the fastest pace in the past eight months since the lockdown in March.

For the first time in six months, during September the country's exports had risen by 5.27 percent at 27.4 billion U.S. dollars. The rise was mostly attributed to ready-made garments, engineering goods, petroleum products, pharmaceuticals and carpets.

Economic experts said that India's economy is showing signs of revival and its growth story is set to return in the next financial year (April 2021-March 2022).

Officials of the Reserve Bank of India (RBI), quoting its latest bulletin on "State of the Economy", said in a recent article that positive indicators show the economy is pulling out of COVID-19's "deep abyss" and is breaking out towards a place in the "sunlight".

The latest economic activity indicators suggest the real GDP growth is expected to break out into positive territory in Q3 of this fiscal year to a slender 0.1 percent, the article said.

The international credit rating agency Moody's has raised India's economic growth forecast for the year 2021 from 8.1 percent to 8.6 percent.

In its latest report, the International Monetary Fund (IMF) described India as the fastest growing economy, and added that its growth rate in the coming year will be at around 8.8 percent, which will be among the highest in the world.

Experts said India's GDP growth rate will again be in positive territory from Q3 and Q4 this fiscal year due to normalized industrial activities and positive growth in public utility sectors like agriculture, electricity, etc.

In a recent interview to a government-run publication, Subramanian said, "I am cautiously optimistic as data is showing a good economic recovery."