Europe passed the grim milestone of one million coronavirus deaths on Monday, as the World Health Organization warned that infections are rising exponentially despite widespread efforts aimed at stopping them. 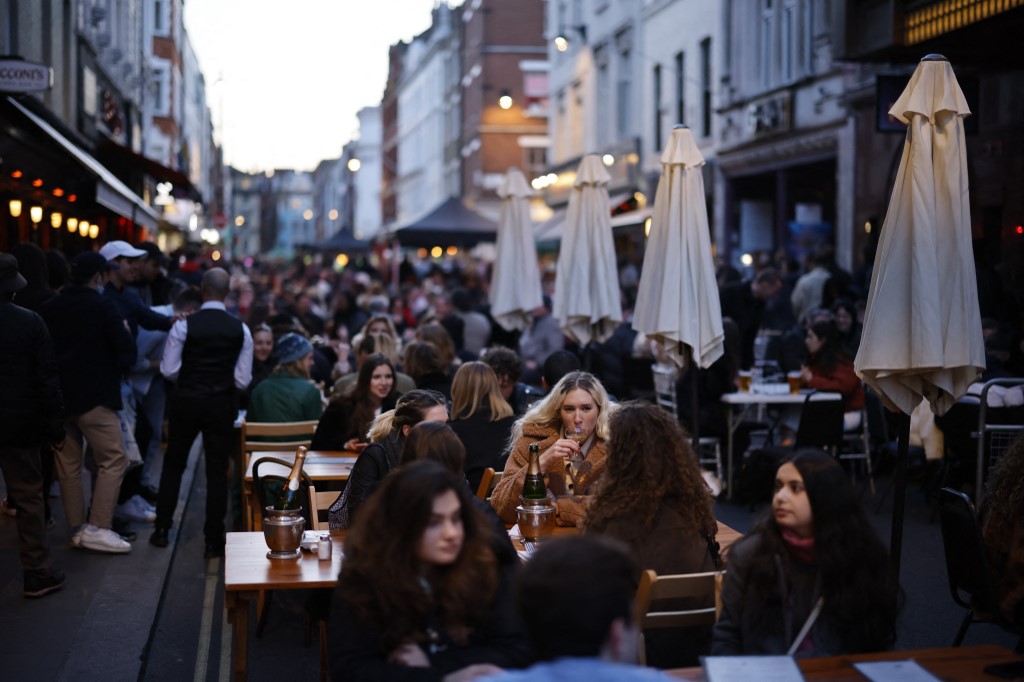 Customers enjoy drinks at tables outside the bars in the Soho area of London, on April 12, 2021 as coronavirus restrictions are eased across the country in step two of the government's roadmap out of England's third national lockdown on April 12, 2021. (Photo: AFP)

"We are in a critical point of the pandemic right now," said Maria Van Kerkhove, the WHO's technical lead on Covid-19.

"The trajectory of this pandemic is growing... exponentially.

"This is not the situation we want to be in 16 months into a pandemic, when we have proven control measures," she told reporters.

The coronavirus has already killed more than 2.9 million people and infected nearly 136 million across the world.

But despite the sombre news in Europe -- the world's worst-hit region -- Britain eased curbs for the first time in months on Monday, allowing Britons to enjoy a taste of freedom with a pint and a haircut.

The changes illustrate how fast-vaccinating countries are leaving other -- mostly poorer -- nations behind.

In South Africa, the president called for African-made vaccines as the continent lags behind, struggling with inadequate supplies as well as a lack of financing and logistical problems.

"Africa needs to harness its own continental capabilities and identify opportunities for collaboration," Cyril Ramaphosa said.

Ramaphosa suggested India or Brazil could help after successfully developing their own generic pharmaceutical industries.

But both giants are battling severe Covid outbreaks, with India overtaking Brazil on Monday as the country with the second-highest number of infections after logging more than 168,000 new cases in a day.

In the Himalayan city Haridwar, maskless Hindu pilgrims on Monday squeezed shoulder-to-shoulder on the banks of the Ganges River for a dip during the Kumbh Mela ritual.

Several Indian regions have tightened their coronavirus measures, with Maharashtra -- India's wealthiest state and current epicentre of its epidemic -- imposing a weekend lockdown and night curfew.

Neighbouring Bangladesh has announced it will virtually seal itself off, shutting down both international and domestic transport starting Wednesday while shutting offices in an attempt to staunch its own spiralling outbreak.

Across the Muslim world, worshippers are gearing up for the start of their second Ramadan of the pandemic, with the holy fasting month due to kick off in many countries on Tuesday.

In Egypt, the Arab world's most populous nation, the sanitary measures are less strict than a year ago when mosques were shut completely and a curfew was in force.

The mood in Cairo was relatively cheerful as the city prepared for special prayers on Monday night, with bright lights festooning the streets. Many of those rushing around the city shopping for last-minute supplies were maskless, however.

Saudi authorities have meanwhile said that only people immunised against Covid-19 will be allowed to perform the year-round umrah pilgrimage from the start of Ramadan.

In Britain, despite one of the world's highest Covid-19 death tolls, there were glimmers of hope Monday as pubs and restaurants were allowed to serve people outside -- a move welcomed by the hard-hit hospitality sector, despite wintry temperatures.

"It'll be great to see everybody again and see all the locals," Louise Porter, landlady of The Crown Inn in Askrigg, northern England, told AFP.

"Our lives have just been turned upside down, just like everybody else's," she said, adding: "We're still here to tell the tale."

Once the worst-affected country in Europe, Britain launched a successful vaccination campaign coupled with lockdown measures that cut deaths by 95 percent and cases by 90 percent from January.

Italy has also been one of Europe's hardest-hit countries, and on Monday, Rome saw the latest in a series of anti-lockdown demonstrations, with several hundred people turning out in protest against weeks of restaurant closures.

In France, now the European country with the most infections, an expansion of the vaccine rollout has buoyed optimism among lockdown-weary residents. Everyone aged over 55 years old is now eligible for a Covid vaccination.