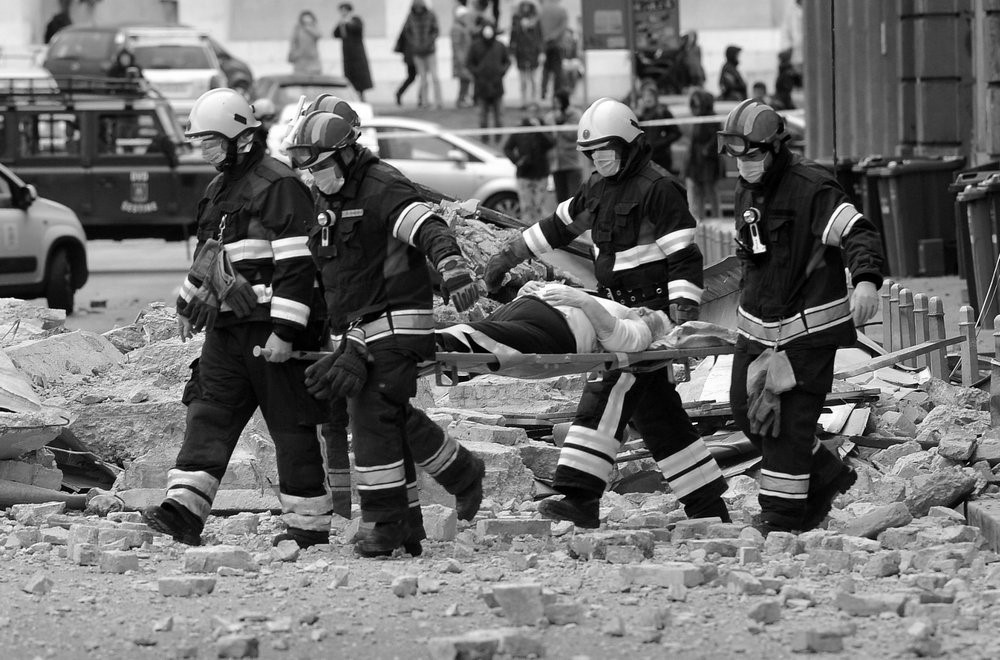 In this March 22, 2020, file photo, firefighters carry a person on a stretcher after a strong earthquake in Zagreb, Croatia. (Photo: AP)

Before New Zealand began its four-week lockdown to fight the coronavirus, a reporter asked Prime Minister Jacinda Ardern what would happen if an earthquake struck while everybody was sequestered in their homes.

“Why on earth would your mind go there?” Ardern quipped back.

Every year, the world contends with devastating typhoons, wildfires, tsunamis, and earthquakes. The dynamic doesn’t change just because the globe also happens to be fighting a pandemic.

What has changed for the worse, however, is the ability of nations to prepare for and respond to natural disasters. Not only that, but experts also fear the usual protocols for coping with the aftermath of such disasters could further spread the virus, compounding the death toll from both.

Carlos Valdés, who dealt with two major earthquakes during five years until 2018 as Mexico’s disaster response director, said that during his tenure, the Mexican government did not have any protocols for dealing with simultaneous disasters like an earthquake and a pandemic.

“That is a scenario that we hadn’t even contemplated,” he said.

Valdés, a seismologist who now works in Costa Rica, said he has since sent Mexican authorities his thoughts on how to handle such a situation. Among other things, he said, is the need to reserve one hospital for earthquake victims to separate them from infectious coronavirus patients.

But whether Mexico has taken action on such ideas remains unclear. Xyoli Pérez, the head of the National Seismological Service, said experts who monitor quakes can work from home during the pandemic but she didn’t address whether they had specific procedures for a dual disaster.

Some natural disasters are predictable, like the wildfires that scorch California most summers. But already, the virus has hindered preparations there after a particularly dry winter.

The US Forest Service has canceled its planned seasonal burns. The hundreds of firefighters who come to assist each year from other countries may not be able to travel. And the camps that usually house thousands of firefighters from across the US pose a big risk of spreading the virus.

“Picture several hundred tents on a football pitch, rows of porta-potties, shared kitchens, and crews of 15 people getting on a bus with all their equipment,” said Michael Wara, the director of the Climate and Energy Policy Program at Stanford University. “Well, with this virus, you can’t put 15 people on a bus. They’re really trying to do a rethink, and they have not yet gotten to the end of that process.”

Earthquakes are also an ever-present risk in California, Wara says, but officials haven’t yet thought through alternatives to their evacuation plans, which typically involve sheltering hundreds of people together in places like school gymnasiums, another situation primed to spread the virus.

Perhaps most concerning, Wara says, is that hospitals and medical staff swamped with virus patients may not be able to cope with additional victims from a natural disaster.

Japan is prone to devastating earthquakes and tsunamis. But a disaster management official in the Cabinet Office headed by Prime Minister Shinzo Abe said that while they have protocols for infectious diseases, they haven’t yet developed a specific disaster plan to account for the coronavirus.

In Japan, schools and community centers are often used as shelters during disasters. Hundreds of people cram into confined spaces with little ventilation and questionable hygiene.

The disaster official said one option to slow the spread of the new virus in such situations might be to use easy-to-assemble cardboard beds and partitions. The Cabinet Office is also considering new ways to spread out evacuees, into places like hotels, or corporate gyms.

One of the world’s most disaster-prone nations in the Philippines. It is typically lashed by about 20 typhoons and storms each year and has regular volcanic eruptions and earthquakes. Often entire villages are moved to emergency shelters such as gyms or basketball courts.

Even without a pandemic, the shelters can be troubled by overcrowding, inadequate sanitation, and poor medical services.

“It will complicate the situation,” Interior Secretary Eduardo Ano said of the virus. “But whatever disaster comes, we’ll face it.”

He said they would try to maintain social distancing during a natural disaster “as much as possible.”

Even some of the top disaster officials in the Philippines remain in quarantine because they’ve contracted the virus or have been exposed to it. It’s a problem playing out around the world, with the virus afflicting leaders like British Prime Minister Boris Johnson.

One of the first natural disasters during the pandemic occurred on March 22 when a magnitude 5.5 earthquake struck Croatia’s capital, Zagreb.

The quake killed a 15-year-old girl, injured at least 27 other people and caused panic during a partial lockdown. People fleeing their shaking homes had little choice but to ignore the official advice of avoiding public areas like parks and squares.

In the end, the city’s preparedness for the pandemic helped them deal quickly with the quake. The military was mobilized to evacuate damaged hospitals.

Some Zagreb residents said the quake took priority over the virus: get out of your home first, worry about grabbing a mask later. Prime Minister Andrej Plenkovic noted that “we have two parallel crises that contradict each other.”

Ardern said that as the leader of an earthquake-prone country sometimes called the Shaky Isles, she is always planning for the possibility of earthquakes. She said social distancing protocols would clearly need to be sacrificed by any crews who responded to a big quake.

“Of course, at that point, you’re in a position of wanting to make sure that you are saving lives,” she said.

But saving lives from a natural disaster that requires people working shoulder-to-shoulder and protecting people from a virus by requiring them to keep their distance is a dilemma that many countries are only just beginning to contemplate.