As the coronavirus sweeps through the upper reaches of government, Republican Vice President Mike Pence and Democratic challenger Kamala Harris face off Wednesday night in a debate highlighting the parties' sharply conflicting visions for a nation in crisis. 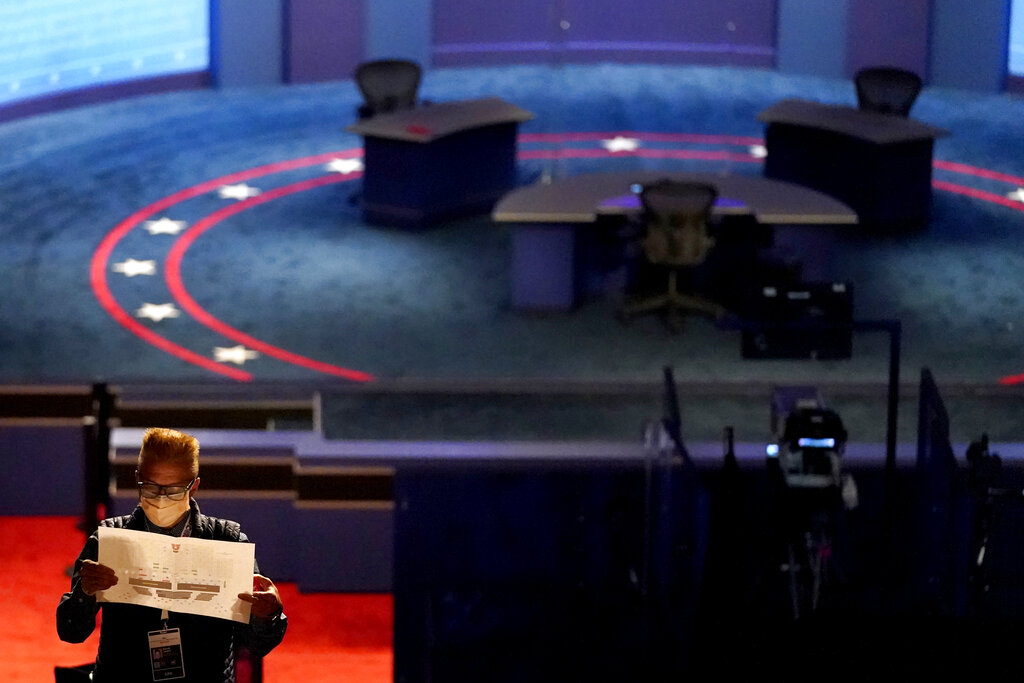 A member of the production staff holds a seating chart while putting labels on chairs socially distanced from each other ahead of the vice presidential debate at the University of Utah, Wednesday, Oct. 7, 2020, in Salt Lake City. Vice President Mike Pence and Democratic vice presidential candidate, Sen. Kamala Harris, D-Calif., will participate in the debate Wednesday night. (AP Photo)

The candidates will be separated by plexiglass barriers in an auditorium where any guest who refuses to wear a face mask will be removed, an extraordinary backdrop for the only vice presidential debate of 2020.

Ultimately, the prime-time meeting is a chance for voters to decide whether Pence or Harris, a U.S. senator from California, is ready to assume the duties of the presidency before the end of the next term. It’s hardly a theoretical question: President Donald Trump, 74, is recovering from the coronavirus, and 77-year-old Joe Biden has not been infected but would be the oldest president ever.

For those reasons and more, the debate at the University of Utah in Salt Lake City may be the most meaningful vice presidential debate in recent memory. It comes at a precarious moment for the Republicans in particular, with growing concern that Trump's position is weakening as more than a dozen senior officials across the White House, the Pentagon and inside his campaign are infected with the virus or in quarantine.

Trailing in polls, Trump and Pence have no time to lose; Election Day is less than four weeks away, and millions of Americans are already casting ballots.

Before Harris says a word, she will make history by becoming the first Black woman to stand on a vice presidential debate stage. The night offers her a prime opportunity to energize would-be voters who have shown only modest excitement about Biden, a lifelong politician with a mixed record on race and criminal justice, particularly in his early years in the Senate.

Harris, 55, is the daughter of a Jamaican father and an Indian mother. She is also a former prosecutor whose pointed questioning of Trump’s appointees and court nominees helped make her a Democratic star.

Pence is a 61-year-old former Indiana governor and ex-radio host, an evangelical Christian known for his folksy charm and unwavering loyalty to Trump. And while he is Trump's biggest public defender, the vice president does not share the president's brash tone or undisciplined style.

Just eight days ago, Trump set the tone for the opening presidential debate, which was perhaps the ugliest in modern history. Wednesday's affair is expected to be far more respectful.

Harris advisers say she does not plan to constantly fact-check Pence on stage and will instead spend her time making the case directly to the American people about what a Biden-Harris administration would offer.

“She’s not there to eviscerate Mike Pence,” said Symone Sanders, an adviser who has been in Harris’ debate prep. “She is there to really talk to people at home.”

Harris' team predicted she would focus on Trump’s yearlong efforts to downplay the pandemic, the fact that many schools are still closed and Trump’s declaration this week that he would end talks on a fresh coronavirus economic relief package until after the election.

Harris will also have the chance to explain her views on law enforcement, an area in which she's irked some progressives, given her past as a prosecutor.

Meanwhile, Pence aims to highlight the administration's economic record and attempt to portray the Democratic ticket as beholden to the "radical left,” former GOP Gov. Scott Walker of Wisconsin, who is helping the vice president prepare for the debate, said on “Fox & Friends.”

Just as Harris will likely speak directly to Trump at times, Pence is likely to speak at Biden and progressives, who have called for a government run health care system known as “Medicare for All" and sweeping environmental reforms to combat climate change called the “Green New Deal.” Biden opposes both plans in favor of more moderate steps that would still be among the most significant changes for health care and environmental policy in the modern era.

Pence will be joined in the debate hall by several guests, including two designed to highlight Trump's “law and order” message against protest violence: Flora Westbrooks’ Minneapolis hair salon was burned down in May during protests over George Floyd’s death at the hands of police, and Ann Marie Dorn is the widow of a retired St. Louis police captain who was shot to death in June after a violent night of protests there.

While the debate will cover a range of topics, the virus will be at the forefront.

Trump released a video just three hours before the debate calling his diagnosis “a blessing in disguise” because it shed light on an experimental antibody combination that he credited for his improved condition — though neither he nor his doctors have a way of knowing whether the drug had that effect.

Pence serves as chair of the president’s coronavirus task force, which has failed to implement a comprehensive national strategy even as Trump himself recovers from the disease and the national death toll surges past 210,000 with no end in sight.

The candidates will appear on stage exactly 12.25 feet (3.7 meters) apart and separated by plexiglass barriers. Both candidates released updated coronavirus test results ahead of the debate proving they were negative as of Tuesday.

Critics suggested that Pence should not be at the debate at all.

The vice president attended an event last week at the White House with Trump and others who have since tested positive, but Pence's staff and doctors insist he does not need to quarantine under Centers for Disease Control and Prevention guidelines. The CDC defines risky “close contact” as being within 6 feet (1.8 meters) of an infected person for at least 15 minutes starting from two days before the onset of symptoms or a positive test.

While some Democrats have set high expectations for the debate, Harris and her allies have been trying to keep them low.

“We know that Vice President Pence is formidable debater, and we know that tonight is a challenge,” said Sen. Cory Booker, D-N.J. “But all those who know and love Kamala just have a lot of confidence in her.”