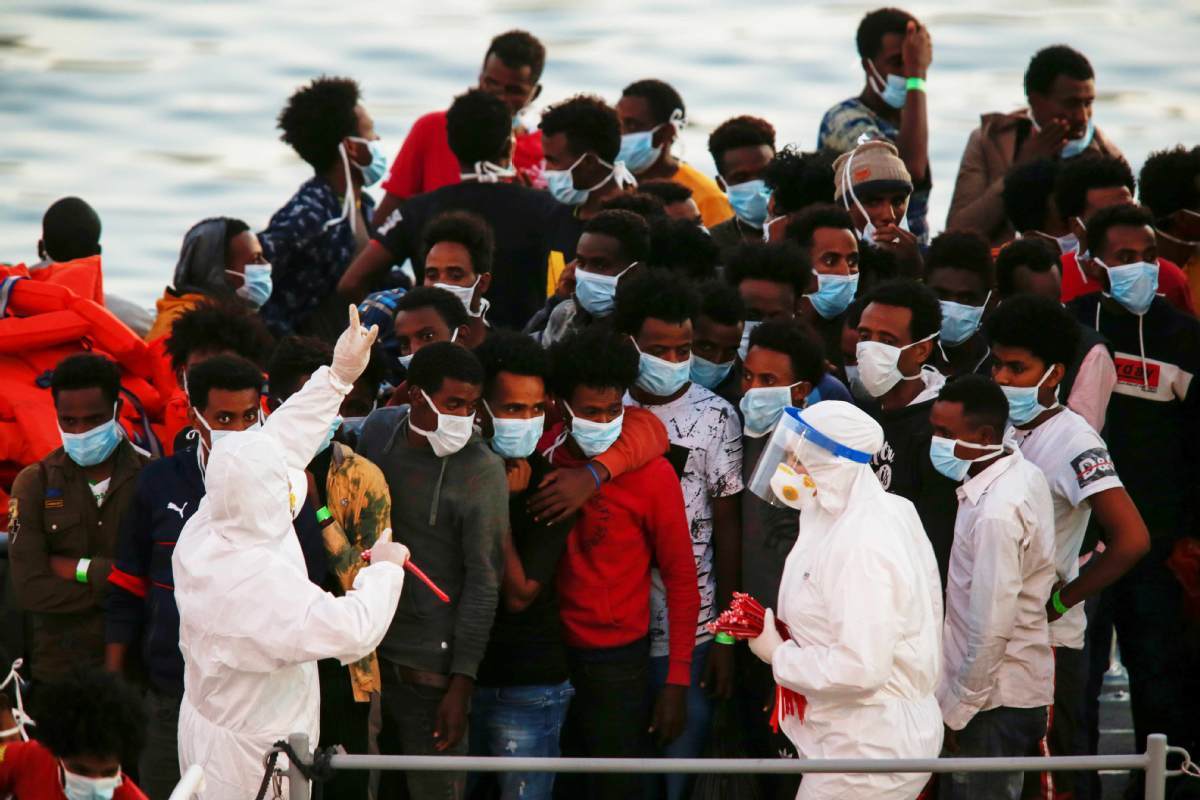 Rescued migrants arrive in Valletta Grand Harbour in Senglea, Malta, on Monday. International organizations say the number of migrants and the risks they face have increased amid the COVID-19 pandemic. (Photo: Agencies)

Since the COVID-19 pandemic has prompted most nations to impose travel restrictions, and with much of the world in lockdown, one might think the number of migrants crossing into the European Union had slowed to a trickle.

However, the opposite is true. Though covert international travel is surely more difficult now, the economic hardships caused by the pandemic have pushed many more desperate people to attempt it.

The Red Crescent societies in both Tunisia and Libya said this month that so many people are now willing to risk their lives attempting to cross the Mediterranean Sea from North Africa that the number of bodies found on African beaches has grown noticeably larger.

In addition, the International Organization for Migration estimates that the number of people attempting to cross in June was 20 percent higher than in the same month last year.

"While Red Cross volunteers in Italy support those who have managed to survive the crossing, unfortunately, on the other side of the Mediterranean, both Libyan and Tunisian Red Crescent volunteers are left to collect the bodies of those who didn't," said Francesco Rocca, president of the International Federation of Red Cross and Red Crescent Societies.

The United Nations has estimated that twice the usual number of migrants are arriving in Italy, despite Rome's attempts to deter them by declaring its ports unsafe because of the novel coronavirus. Threats to confiscate the boats used by various charities to pluck people out of the Mediterranean have also failed to slow the migration.

Greece also is seeing a huge increase in migrants, and Turkish President Recep Tayyip Erdogan has threatened to release 5.5 million people in camps in his country amid disputes with Athens.

The growing number of impoverished migrants heading for Europe is in part the result of the novel coronavirus pandemic eliminating previously available work, according to Agence France-Presse, and newly unemployed people in nations with fragile social welfare systems apparently are willing to risk dangerous routes into the EU.

AFP quoted Alassane Mamane, a retired civil servant in Agadez, a city in the landlocked West African country of Niger, as saying: "Gambians, Senegalese, Malians, they are all determined to head (to Europe). One migrant said to me: 'I would rather die from the coronavirus than live in misery.'"

The World Bank said the scale of job loss among formerly legal migrant workers in middle-income nations was so large that money transfers to their families back home have plunged nearly 20 percent worldwide during the lockdown to $445 billion.

"This is a potential crisis within a crisis," said Manuela Tomei, director of the Conditions of Work and Equality Department of the United Nations' International Labor Organization.

"We know that many millions of migrant workers, who were under lockdown in their countries of work, have lost their jobs and are now expected to return home to countries that are already grappling with weak economies and rising unemployment," Tomei said. "Cooperation and planning are key to avert a worse crisis."

Many migrants who slip into the EU push on toward the major economies of France, Germany and the United Kingdom. Those heading for Britain face another perilous boat journey across the English Channel.

The UK's Home Office said British authorities intercepted 180 migrants in 15 boats on July 12. In addition, French authorities reportedly intercepted another 200, making it a record-breaking day. Many others are assumed to have arrived undetected.

Home Secretary Priti Patel told fellow members of Parliament during an appearance before the Home Affairs Select Committee that authorities must deter people from attempting the crossing.

"For many of these individuals who have been trafficked and facilitated, it is incredibly high risk for them to carry on in this way," she said. "The French and the British authorities have picked up many people that have literally ended up in the water."

With so many people willing to risk their lives, and with criminals able to make huge sums of money off them, the government has a "major, major problem", she said.

Beth Gardiner-Smith, chief executive of the charity Safe Passage International, told the Mirror newspaper: "If the home secretary wants to avoid people risking their lives crossing the Channel in dinghies, then her government should not be, right now, risking the future of the only safe, legal routes to asylum that exist, which would push more children into the hands of people smugglers."