WORLD Pandemic windfall for US schools has few strings attached

Pandemic windfall for US schools has few strings attached

As the federal government releases historic sums of pandemic aid to the nation's schools, it's urging them to dream big, to invest in seismic changes that will benefit students for generations to come. But many districts say they have more urgent problems to tackle first. 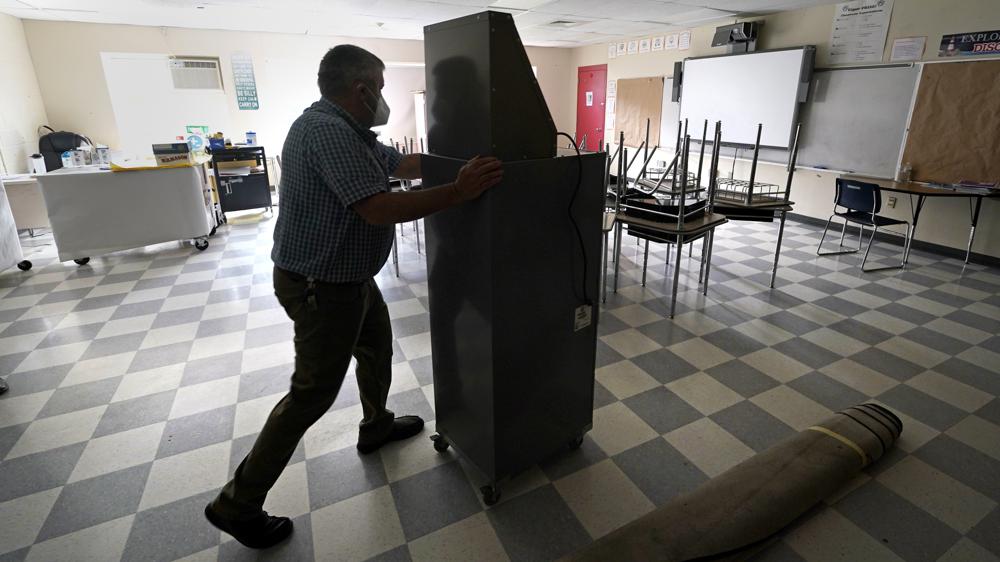 Whitney Anderson wheels a recently purchased air scrubber through a classroom in advance of the school year at the E.N. White School in Holyoke, Mass., on Wednesday, Aug. 4, 2021. (Photo: AP)

In Detroit, that means fixing buildings with crumbling ceilings and mold infestations. Like other school systems, Detroit is caught between the Biden administration's lofty aspirations and bleak realities. The district is using some of the government money to hire tutors, expand mental health services and cut class sizes. But at least half of its $1.3 billion windfall is being set aside to make long-neglected repairs.

"For decades, we have been inequitably funded to deal with the enormous needs that poverty and racial injustice have created in our city," Superintendent Nikolai Vitti told The Associated Press in an interview. "Now with the COVID relief, we're going to be able to put a significant dent into the challenge."

The administration has encouraged schools to take leaps, not steps, with the funding. Education Secretary Miguel Cardona has called it a time for bold innovation that breaks down inequities and rethinks all aspects of schooling.

"This is our moment to ensure that we reopen, reinvest and reimagine our schools differently and better than ever before," Cardona said at a virtual education summit in June. "These next months and years will determine the trajectory of success for millions of students in our care."

Despite those lofty aspirations, many large, urban districts are putting much of their pandemic relief toward practical needs, such as hiring nurses, restocking libraries, fixing playgrounds and bringing back art classes.

So far, there's little evidence of major change, said Marguerite Roza, director of the Edunomics Lab, a school finance think tank at Georgetown University. Part of the problem, she said, is that the aid was given to schools with few strings attached.

"That's not a recipe for innovation," Roza said. "We sprinkled the dollars as blank checks to every one of these districts. And many are going to do what they already know how to do."

The infusion of pandemic relief is bigger than anything American schools have seen before. It totals $190 billion, more than four times the amount the Education Department spends on K-12 schools in a typical year. Some districts will receive sums amounting to 50% or more of the cost to operate their schools for a year.

Congress has sent the funding in three waves since the start of the pandemic. The latest and largest round, which totals $123 billion, is still being distributed and gives school enormous flexibility in how to spend it. While 20% must be used to address learning setbacks, the rest can be used on nearly any cost that school officials deem "reasonable and necessary."

Yet little is being done to track how schools are using the money. After the first wave of funding, the Education Department's internal watchdog warned that grant oversight has been a "persistent management challenge." It cautioned that internal weaknesses could limit the department's ability to monitor the funding. While states are required to submit spending plans to the federal government, some Republicans in Congress have pressed for new legislation that would ensure greater transparency around the spending.

The Associated Press, relying on data published or provided by states and the federal government, for the first time tallied how much money was granted to nearly every district in the country. The federal government has not released full data at that level of detail.

The AP tracked more than $155 billion sent to states to distribute among schools since last year, including general pandemic relief that some states shared with their schools.

Schools have three years to spend the latest round, a window that districts say is short for such a large amount of money. In many areas, school officials are reluctant to take on costs they may not be able to sustain after the federal aid is gone.

In St. Paul, Minnesota, the public school system is getting $321 million in total funding, an amount that Superintendent Joe Gothard calls "jaw-dropping." But he said the time frame limits his spending options. The district has hired some new teachers, but it's mostly focusing on one-time costs such as building renovations and replacing library books.

"Three years will come very fast," Gothard said. "It's about managing expectations, honestly, and it starts with myself. We really have to be careful about avoiding a financial cliff."

Detroit is taking a similar approach. The district plans to add mental health services in dozens of schools, but it's being done through a contractor. Even the building improvements will only be temporary if the district does not get additional funding to maintain them, Vitti said.

Vitti's plan has the support of the school board. Deborah Hunter-Harvill, a board member who graduated from a district high school in 1973, recalled being a student when "the infrastructure was not crumbling, and everything was clean."

"We want our students of today to have that same feeling and opportunity we had when we attended DPS back in the day," Hunter-Harvill said.

But some in the community say the district should focus on other priorities, including improving online classes. Ida Byrd-Hill, chief executive of Detroit-based reskilling firm Automation Workz, said students from economically disadvantaged families have struggled to learn through remote instruction that mostly relied on worksheets and online lectures.

"In the past, school infrastructure meant brick-and-mortar buildings, alone," Byrd-Hill said. Now it must include high-quality virtual learning systems.

Either way, the federal funding could end up saving local taxpayers. Before the pandemic, the district was planning to request a local tax increase to cover $1.5 billion in building repairs. It would have been a tough sell in a district with a troubled financial history. But with the new funding, Detroit might cancel its plans to request a tax hike.

Districts across the U.S. have spent the summer debating how to spend the new money, in some cases facing pressure from competing groups of parents, teachers and activists.

Some families want more money to go to special education. Others have demanded teacher training to address racial bias. Some activists have pushed back against plans to pay for building repairs, saying the relief should be spent directly on students.

Eyeing the district's $300 million in pandemic aid, the teachers union in Sacramento, California, called for smaller class sizes, which would mean hiring new teachers, along with pay increases. And while the union is not asking to tap into federal money for raises, the mere existence of the windfall bolsters the contention that raises are affordable.

The American Federation of Teachers says the federal relief should focus on infrastructure and academic support, but President Randi Weingarten said raises also will be needed to stop waves of teachers from quitting after a stressful year.

"This is the time to create an environment to recruit and retain teachers, and part of that is salary increases," she said.

In Detroit, federal money will be used to continue hazard pay and teacher bonuses that the district started offering last year. Vitti said teaching is harder in the city because of its deep poverty, and he wants teacher pay to reflect that.

"They should be paid more. We just haven't always had the revenue to do it," he said.

Another source of concern for schools is state funding. While the worst fears of education cuts have not come to pass, there's worry that the infusion of federal money will provide a reason to slash future state budgets.

In Holyoke, Massachusetts, one of the state's poorest areas, the pandemic aid helped offset a $4 million reduction in state funding the district faced last school year. But with future funding still uncertain, the district is avoiding taking on big cost increases.

So far, the district has made plans for only a small share of its $53 million in total relief. It's hiring 32 math and reading teachers, and adding art and music classes in schools where those subjects have long been absent, among other spending decisions.

Without more time and guarantees of sustained funding, Superintendent Anthony Soto said it feels like districts are "just throwing money at an issue and thinking that these real systemic issues are going away. And they're not."

In Detroit, Vitti sees a chance to make the case for more state funding. He hopes to prove that even the one-time funding will help boost graduation rates, cut absenteeism and lead to tangible improvements for students. If he can do that, he hopes lawmakers in Lansing will offer him a continued lifeline to keep up the success.

"We're looking forward to show clear outcomes from this investment," he said, to make the case that similar funding "should be continued in an equitable way."