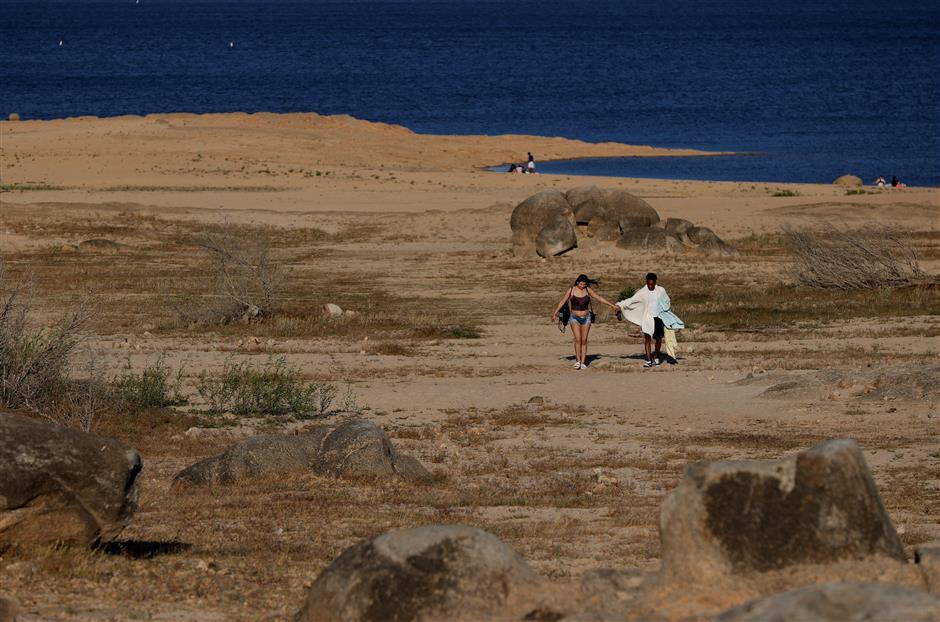 A couple walks on the dry lakebed of Folsom Lake on Monday in Granite Bay, California.

California Governor Gavin Newsom on Monday expanded a drought emergency to a large swath of the United States’ most populous state while seeking more than US$6 billion in multiyear water spending as one of the warmest, driest springs on record threatens another severe wildfire season across the American West.

The Democratic governor said he is acting amid “acute water supply shortages” in northern and central parts of California as he called again for voluntary conservation.

Yet the state is in relatively better shape than it was when the five-year drought ended in 2017 as good habits have led to a 16 percent fall in water usage.

His emergency declaration now includes 41 of 58 counties, covering 30 percent of California’s nearly 40 million people. And he said a further expansion is likely as conditions worsen.

The US Drought Monitor shows most of the western coast state is in extensive drought just a few years after California emerged from the last drought.

“We’re staring down at what could be disastrous summer and fall, with the potential of communities running out water, and fires,” said Democratic federal Representative Jim Costa, who accompanied Newsom to the announcement made before a Central Valley reservoir with a deep bathtub ring of dry earth surrounded by browning grass.

Like most of the state’s extensive interconnected system of reservoirs and canals, the San Luis Reservoir is at less than 60 percent of its seasonal average as scarce winter rain and snow turns to a dry summer that Newsom said is imperiled by climate change.

Officials fear an extraordinarily dry spring presages a wildfire season like last year, when flames burned a record 16,996 square kilometers across the state.

That requires the state to envision “a much more resilient, a much more vibrant, much more dynamic water delivery system,” he said, noting that the one largely constructed in the last mid-century to carry water from Northern California to the south, “helped us build the world’s largest middle class” by enabling the state’s population and agricultural growth.

The governor is asking state lawmakers to approve what he said is a record US$5.1 billion over four years for water projects.

Plus another US$1 billion to help an estimated million Californians who are behind on their water bills in part because of the economic hardship of the pandemic.

Another US$200 million would go to repair canals damaged when the ground beneath them sank as more groundwater was pulled from wells.