Parched manufacturing city in India brings in water by rail 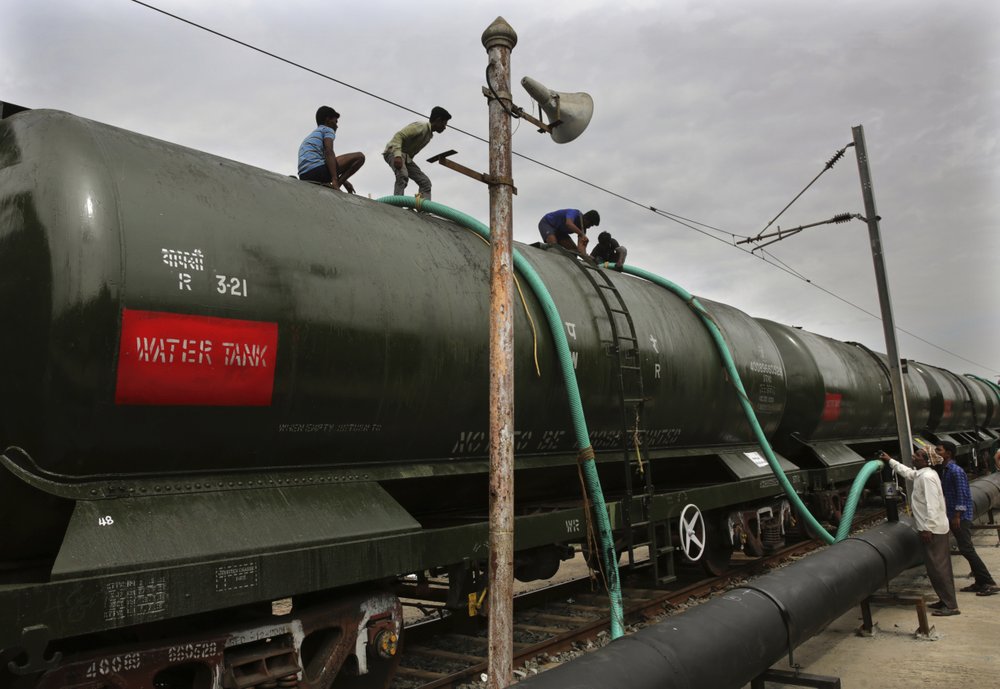 Workers fill wagons of a train with drinking water piped in from the Mettur dam on the Cauvery River, at Jolarpet railway station, 216 kilometers (135 miles) from Chennai in the Southern Indian state of Tamil Nadu, July 17, 2019. On its daily sojourn, the 50-tank train carries two and a half million liters of drinking water, a small but critical source for Chennai’s water board, which is employing an army of trucks to deliver 500 million liters of water a day since desiccated reservoirs and fast-diminishing groundwater forced the city to ration public tap water to millions of users for months. (Photo: AP)

Amid the green Yelagiri hills of southern India, the train inches along the tracks, carrying what has become precious cargo: drinking water bound for Chennai, India’s parched Motor City.

Demand for water in the manufacturing and IT hub on the Bay of Bengal far outstrips supply, forcing authorities to take extreme and costly measures to serve the city’s 10 million people. And so, every day, the train sets out on a four-hour, 216-kilometer (134-mile) journey, its 50 tank cars carrying 2.5 million liters (660,000 gallons) of water drawn from a dam on the Cauvery River.

The train is classic Indian “jugaad,” the Hindi word for a makeshift solution to a complicated problem.

Executive engineer K. Raju confessed this is not the best engineering solution to Chennai’s water problem. “But this is a timely way to help and that’s all. This is not a permanent solution,” he said. Building an underground pipeline that brings in water from closer areas would be better, he said.

As with other fast-growing cities in the developing world, Chennai’s water woes were years in the making.

Its reservoirs are empty, and it is relying on dwindling groundwater sources and two desalination plants for the vast majority of its water. Since June, the water board in Chennai has been turning off the taps for all but a couple of hours a day.

In early July, the government of Tamil Nadu state, of which Chennai is the capital, approved a crash engineering project to bring in water by rail for the next six months at a cost of about $94 million. Raju’s team had just 10 days to lay the necessary 650 meters (half-mile) of pipeline and install a pumping system to put water into rail cars formerly used to carry cooking oil.

The amount of water transported is just a tiny fraction of the 500 million liters (130 million gallons) a day that the water board delivers to its customers.

The train sets out every day at sunset, and just after midnight, it screeches into the city’s mostly deserted Villivakkam railway station, where men in hard hats and reflective vests connect blue hoses to the cars. It takes four hours for the water to be decanted into the city’s water system.

The following morning, at one of the city’s water distribution stations, Ranganathan, a longtime water truck driver in Chennai, pulls his colorfully painted vehicle underneath a big water tap, fills up his rig and begin making neighborhood deliveries. He puts in 16-hour days, with no time even to eat, he said.

“People get excited once they see our lorries,” said Ranganathan, who goes by only one name. “On days if it becomes late, people will start panicking. What to do? They are like my mother, sister who are worried due to water scarcity, so we help.”

At one drop-off point, a neighborhood of low-slung, one-room houses called Thousand Lights, K. Devi, a 41-year-old mother, said the six jugs of water she receives free every day mean that she and her family can bathe and wash clothes just once a week. Sometimes she buys extra cans of water for 35 rupees (about 50 cents) apiece.

She is happy to have the water, regardless of the distance it had to travel to reach her Chennai slum.

“They are voluntarily giving water, then why should we refuse?” she said.

This isn’t the first time water trains have rolled into Chennai. When the city experienced a severe drought in 2001, it imported water by rail from Erode township, more than 400 kilometers (about 250 miles) southwest of Chennai.

After that, the state government mandated that Chennai households install rainwater collection systems. The water board also began buying water from farmers and built two desalination plants. But the supply still fell short of ever-growing demand.