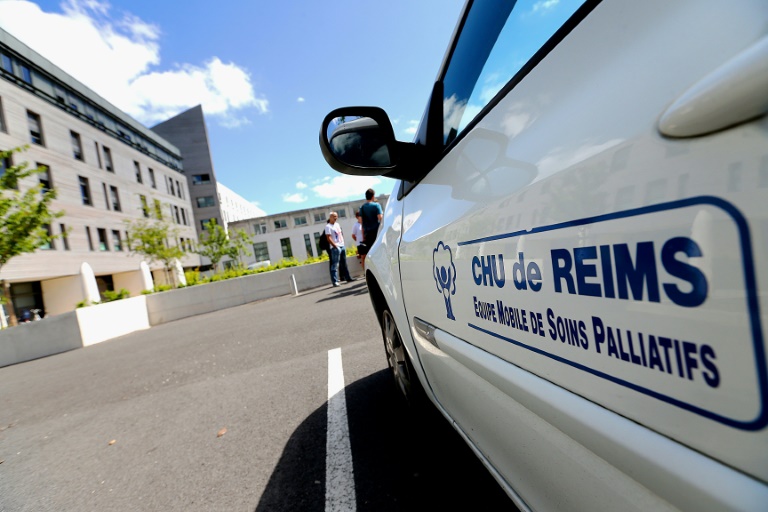 Vincent Lambert has been in a vegetative state for a decade. (Photo: AFP)

The parents of a Frenchman kept alive in a vegetative state for a decade appealed to President Emmanuel Macron Saturday to ensure his treatment continues, two days before his doctor plans to stop all medication.

Vincent Lambert who suffered severe brain damage after a car accident in 2008 which left him a quadriplegic is at the centre of a bitterly-disputed legal case that has torn his family apart.

In 2014, his doctors, backed by Lambert's wife Rachel, five of his siblings and his nephew Francois decided to stop his nutrition and hydration in line with France's passive euthanasia law.

But his parents, devout Catholics, and his half-brother and sister obtained a court order to halt the move on grounds his condition might improve with better treatment.

"Mr President, Vincent Lambert will die of lack of hydration in the week of May 20 if you do nothing and you are the last and only person who can intervene," their lawyers Jean Paillot and Jerome Triomphe wrote in an open letter on Saturday.

"We are asking you to ensure that the health minister respects France's duties towards a handicapped man," they wrote.

If Lambert was left to die, posterity would view this as a "state crime", they said.

They called on Macron to comply with a request by a UN committee on disabled rights which asked France earlier this month to suspend any decision to withdraw life support while it worked on a detailed opinion on the case.

The UN committee reiterated its call on Friday.

France's Conference of Bishops added its voice to the controversy Saturday, calling on the authorities to wait for the UN committee's findings.

"Why this rush to lead him to death," they said in a statement. "Why would the French state, which makes a point of honour of its promotion of human rights, dispense with the respect of this convention for Vincent Lambert?"

Health Minister Agnes Buzyn said that although France would answer the committee, it was not under any legal requirement to abide by its request.

France's official position is that patients are entitled not to suffer "unreasonable obstinacy".

Lambert's doctor told the family on May 10 that he would stop all treatments on Monday.