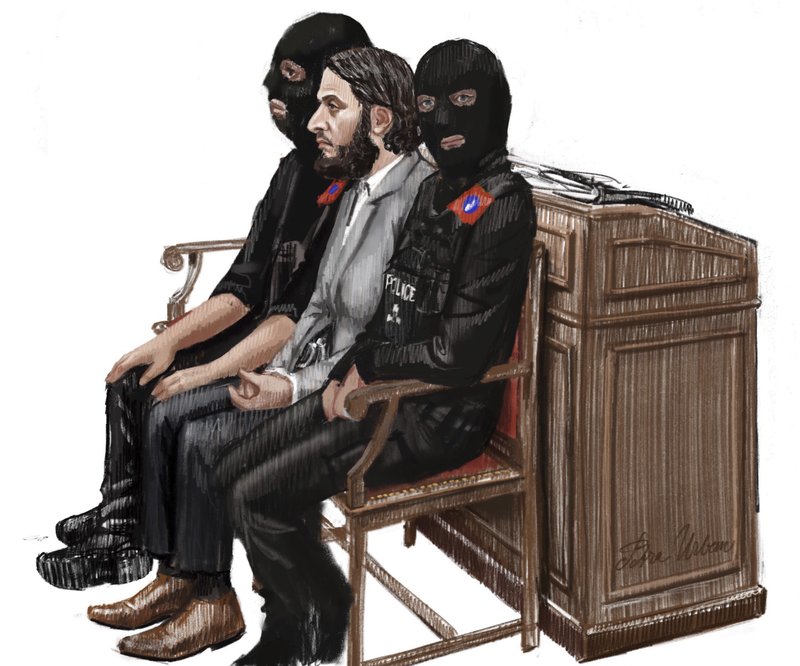 A Belgian court said Tuesday that the sole surviving suspect in the November 2015 attacks on Paris refused to re-appear in a trial that victims had hoped would shed light on the Islamic State network that later struck Brussels as well.

Once Europe’s most-wanted man, Salah Abdeslam appeared Monday, defying the court and refusing to answer any questions about the March 2016 shootout with police in Brussels that led to his capture. He informed the court he didn’t wish to return for the next hearing.

Where Abdeslam has refused to discuss his role in the Paris attack or the network of killers who targeted Brussels four months later, defendants in a separate trial in France were only too happy to talk about their criminal backgrounds, which they insisted had nothing to do with terrorism.

In closing arguments Tuesday, prosecutor Nicolas Le Bris seemed largely to agree. Jawad Bendaoud and Mohamed Soumah rented out a squat to the commander of the leader of the IS cell and an accomplice until a police standoff that collapsed the building and killed the fugitives.

The trial is the first in France related to the attacks, which killed 130 people.

Bendaoud and Soumah enthusiastically explained the life of a confirmed street criminal, and how they managed to overlook the links between the Belgians desperate for a hiding place and the attack that had just killed 130 people in their city.

In requesting a four-year term for Bendaoud and Soumah, rather than the six-year maximum, Le Bris said they knew they were hiding criminals, but that there wasn’t sufficient evidence they knew the strangers were involved in the Nov. 13, 2015, attacks, much less that one of them was the ringleader, Abdelhamid Abaaoud.

“In putting too big a suit on Jawad Bendaoud, you risk making Abaaoud less credible, and that’s a real danger,” Le Bris said.

Patrick Jardin, whose daughter Nathalie died in the Bataclan concert hall, said he was disappointed in the prosecutor’s request.

“They are accomplices with the people who killed my daughter. Justice should have no pity on people like that,” Jardin said.

However, he called for the maximum 5-year sentence for co-defendant Youssef Ait-Boulahcen, arguing that Ait-Boulahcen knew who the men were, what they had done, and that they were plotting another attack. Unlike the two talkative drug dealers, Ait-Boulahcen spoke little and revealed even less.

“His words were careful, calibrated, thought-out, a little too controlled,” said the prosecutor. “This is someone who sends shivers down your spine.”

Ait-Boulahcen’s sister, Hasna, secured the hideout after and died with the fugitives in a police standoff. An IS fighter later identified as Mohamed Belkaid wired her the money on Nov. 17 from Belgium.

By then, Belkaid had already made arrangements for Abdeslam, who had returned to his hometown of Brussels to hide.

In testimony Monday, Abdeslam’s co-defendant, Sofiane Ayari, reluctantly described months of changing apartments with the fugitive Abdeslam as police raided location after location, always a step or two behind.

That changed on March 15, 2016, when police broke down the door of yet another apartment and this time were met by automatic gunfire from Belkaid. Ayari and Abdeslam escaped; Belkaid was fatally shot.

The two are charged with attempted murder in a terrorist context and face up to 20 years in prison.

Four days after their capture, the IS network linked to the Paris attacks struck the Brussels airport and metro. In all, 162 people were killed in the two cities, in addition to nearly all the attackers.

Monday was Abdeslam’s first public appearance and, in brief comments to the judge, he bitterly said he had no intention of allowing the court to “satisfy public opinion.”

Abdeslam, who has been imprisoned in France in solitary confinement, said silence would continue to be his defense. He informed the court he didn’t wish to return for a hearing later in the week, according to a statement Tuesday from the tribunal.