PARIS, Dec. 5 (Xinhua) -- Paris police made 22 arrests on Saturday after violence flared up in a demonstration against police brutality and a controversial bill. 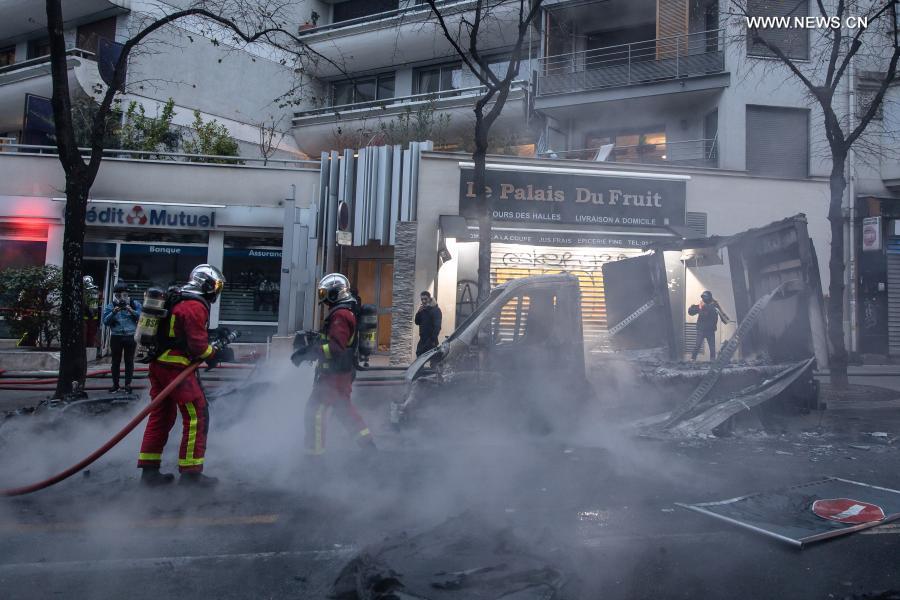 Firefighters distinguish a fire during a demonstration in Paris, France, Dec. 5, 2020. Paris police made 22 arrests on Saturday after violence flared up in a demonstration against police brutality and a controversial bill. (Photo: Xinhua)

BFM TV footage showed cars and barricades were set on fire in Gambetta district, west of Paris. Several windows, including those of a supermarket and a bank, were damaged.

The footage also showed that face-masked individuals threw projectiles at the police, who responded by firing tear gas.

Ministry of Interior said 400 to 500 vandals had infiltrated the march and police have made 22 arrests.

Violence also broke out on Nov. 28 when people rallied against police violence and urged the government to withdraw a controversial article from a security bill.

The article stipulates that the publication of images of on-duty police officers with the intent of harming their "physical or psychological integrity" could face up to a year in jail and a fine of 45,000 euros (54,550 U.S. dollars).

With the security bill, the French government intended to protect policemen from threats and violence. But the bill had set off concerns that it would restrain freedom of expression and impede reporting on police brutality.

Earlier this week, the government said it would rewrite the article but some opponents want that several other articles of the bill, which aim for "the establishment of mass surveillance tools" such as drones and surveillance cameras, also be scrapped.