Demonstrators looted stores on the Champs-Elysees avenue in Paris on Saturday, on the 18th week of "yellow vest" protests, characterised by an uptick in violence after dwindling participation in recent weeks. 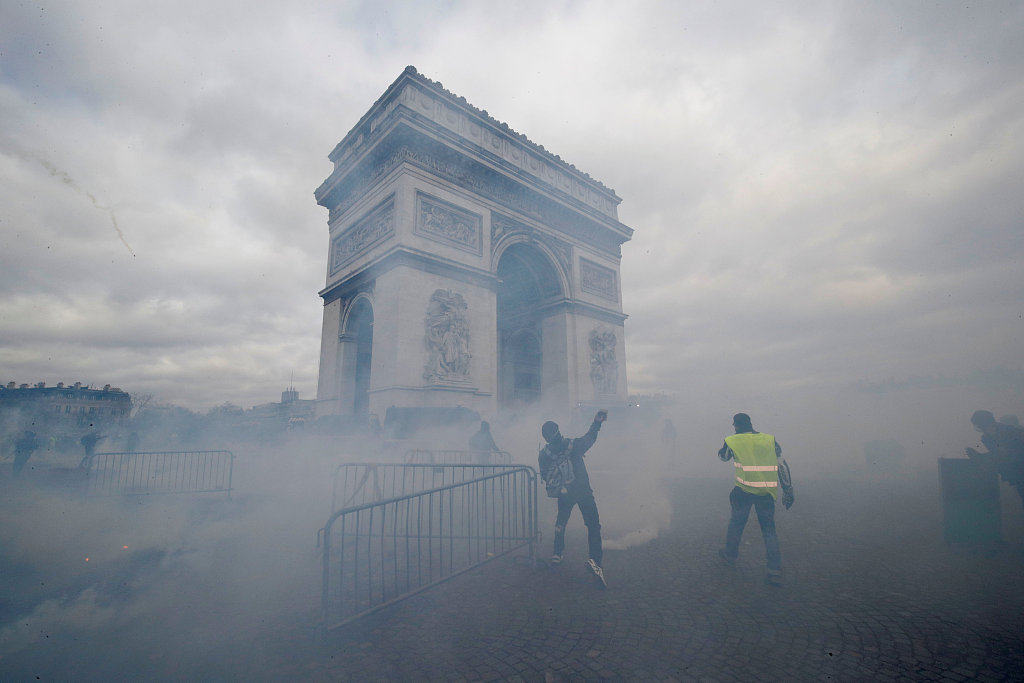 Protesters clash with French riot police during a demonstration by the "yellow vests" movement in Paris, France, March 16, 2019. (Photos: VCG)

A Boss menswear store and the gourmet Fouquet's restaurant were among the premises vandalised as groups of masked protesters lobbed stones at police defending the Arc de Triomphe war memorial.

The police responded with teargas and water cannon but failed to disperse the more radical protesters who erected burning barricades in scenes reminiscent of the worst "yellow vest" riots in the capital in December.

The rally was called to coincide with the end of two months of public debates called by President Emmanuel Macron to give voters a forum to air their grievances and propose policy changes.

The protesters have dismissed the debates as a smoke-screen.

Saturday's turnout will be seen as a measure of the power of the "yellow vest" movement, which began in November over fuel tax hikes but quickly ballooned into a broader anti-government rebellion.

Thousands of people converged on the Champs-Elysees -- focal point of the Paris protests over the past four months -- for "Act XVIII" of a movement which had appeared to be running out of steam but whose core demands still enjoy broad public support.

The Arc de Triomphe, which was sacked by protesters on December 1, was again the focal point of the unrest.

Black-clad demonstrators encircled the square surrounding the arch, pelting the police with stones.

"Macron, we're coming to get you at home," some of the protesters chanted, referring to the presidential palace near the Champs-Elysees.

Thirty-one people had been arrested by mid-morning, the police said.

Interior Minister Christophe Castaner condemned the violence as the work of "professional trouble-makers" who had "infiltrated" the march and said he had ordered police to "react with the greatest firmness to these unacceptable attacks." 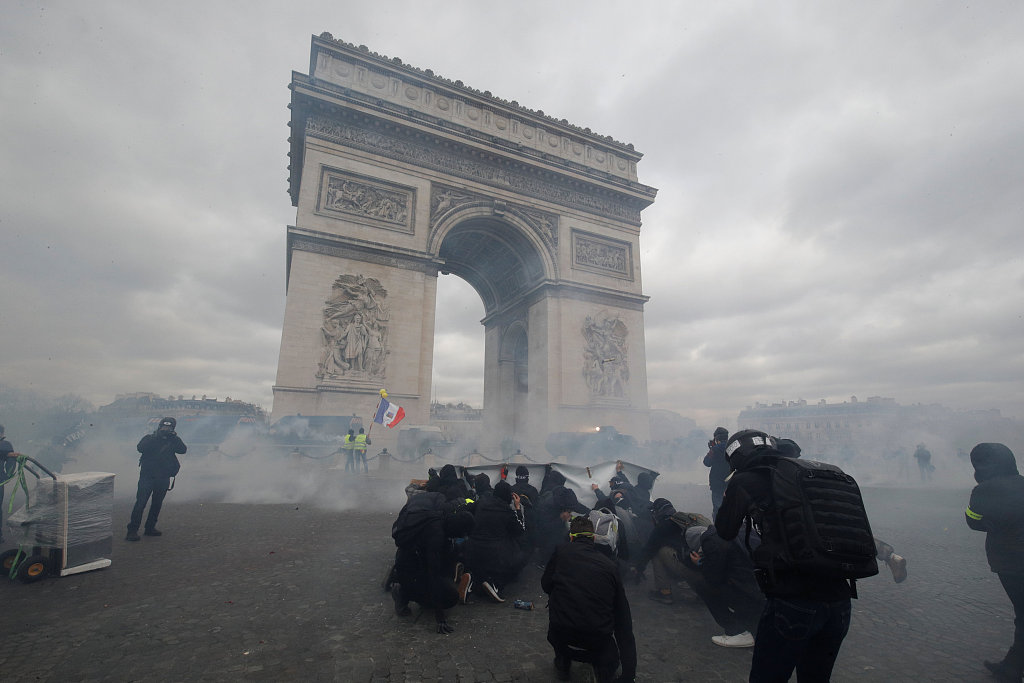 Protesters clash with French riot police during a demonstration by the "yellow vests" movement in Paris, France, March 16, 2019.

Last week, only around 28,000 people demonstrated nationwide, according to the authorities, a tenth of the numbers that turned out for the inaugural protest on November 17.

But on Saturday the protesters were out in force again, pouring into the capital by train and cars from around the country for what they called an "ultimatum" to Macron.

Over 5,000 police were deployed, along with several armoured police vehicles, and several metro stations were closed.

Macron, who was caught off guard when the grassroots movement erupted in November, loosened the state's purse strings to the tune of 10 billion euros ($11.2 billion) to try defuse the protests.

He also launched a "grand national debate" on the internet and town hall meetings to gather feedback on how the country could be reformed.

But the measures failed to quell the anger of the demonstrators, who accuse Macron, a centrist former investment banker, of being beholden to high finance.

Laurent Casanova, an engineer who was among the protesters, told AFP he had come to mark the end of the national debate.

"We have been patient but now we want results," he said.

The protest is one of several planned in Paris on Saturday, where French climate campaigners are also planning a "March of The Century".