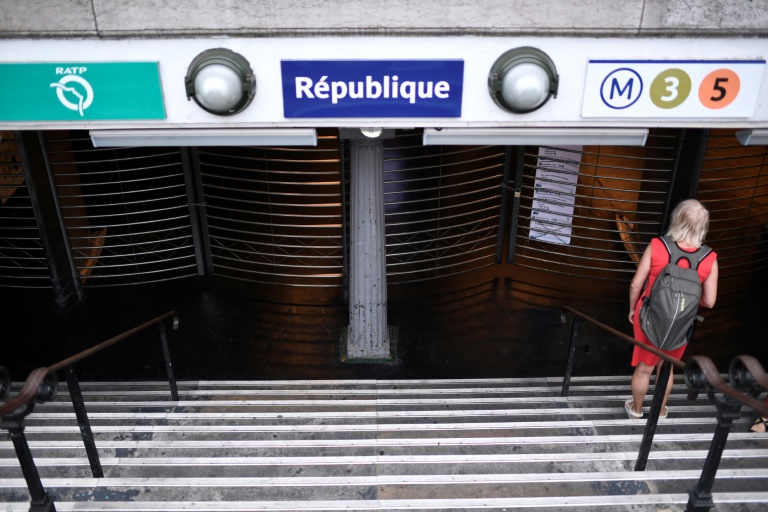 Paris metro workers walked off the job Friday in the first major protest against a looming pension system overhaul, snarling traffic as people scrambled to find alternatives means for getting around.

Ten of the city's 16 metro lines were shut down completely, while service on most others was "extremely disrupted," the city's RATP transit operator said.

Two of the three main suburban lines that traverse the city were also severely disrupted, as were most bus and tram services, leading to long lines of exasperated commuters.

Streets were clogged as people used their cars or booked taxis, while others sought out ride-hailing companies -- many of which were charging up to four times their normal rates, according to a rash of angry Twitter postings.

Others used bicycles or the electric scooters that have flooded the French capital in recent months, prompting a surge in traffic on the city's burgeoning network of cycle paths.

Paris transit operator RATP was trying to ease the pain by promoting a plethora of special deals from ride-hailing firms as well self-service bike, moped and scooter providers.

Verena, a woman using one of the city's Velib bike-sharing system, told AFP she had signed up for the service the day before the strike.

"I was very lucky, I found one, I had expected to walk for an hour this morning," she said. "It's even electric."

But others, not least tourists, weren't so lucky.

"We're trying to go to the Jardin des Plantes (garden), but we're having trouble figuring out which lines are actually working," a British man who gave his name as Tim told AFP.

But with other workers taking the day off to avoid the gridlock, the situation was not as chaotic as many had feared.

"Lots of my colleagues organized things so they could stay home. For example, we had a meeting today that we pushed back to next week," said Gwenn, a 39-year-old financial controller, at the Bastille station.

But further hassles appeared likely this evening, with the RATP warning that all metro lines would stop running at 8:00 pm (1800 GMT), except for the network's two fully autonomous lines.

The strike is the first major protest against President Emmanuel Macron's plan to implement a universal pension system that would do away with the more advantageous plans enjoyed by workers in state transport and utility companies.

Other professions that have special schemes include sailors, solicitors and Paris Opera workers.

"We have to tell the French the truth... We are going to have to work longer," Prime Minister Edouard Philippe said on French television Thursday.

But metro workers say the reforms would force them to work longer by removing their long-held rights to early retirement, secured decades ago to compensate for spending long hours underground.

France's state auditor, the Cour des Comptes, said the average retirement age for RATP workers in 2017 was 55.7, compared with 63 years for most French workers.

The three main RATP labour unions have called the strike "a shot across the bow" against the pensions overhaul, the latest element in Macron's push to bolster France's economy and cut spending.

"It's not a strike by the privileged few. It's a strike by employees saying 'We want to retire at a reasonable age with a reasonable pension'," Philippe Martinez, head of the CGT union, told France Info radio.

It is shaping up to be the biggest metro strike since 2007 when former president Nicolas Sarkozy also pushed through pension reforms.

During his 2017 presidential campaign, Macron pledged not to touch the current earliest legal retirement age of 62 for most workers.

The reforms unveiled in July, which would harmonise the 42 different pension schemes currently in place, would still allow people to retire at 62, but on a reduced pension.

A full pension would only be available from 64.

The government is in negotiations with unions over the reforms, which are likely to face further opposition in the coming weeks.