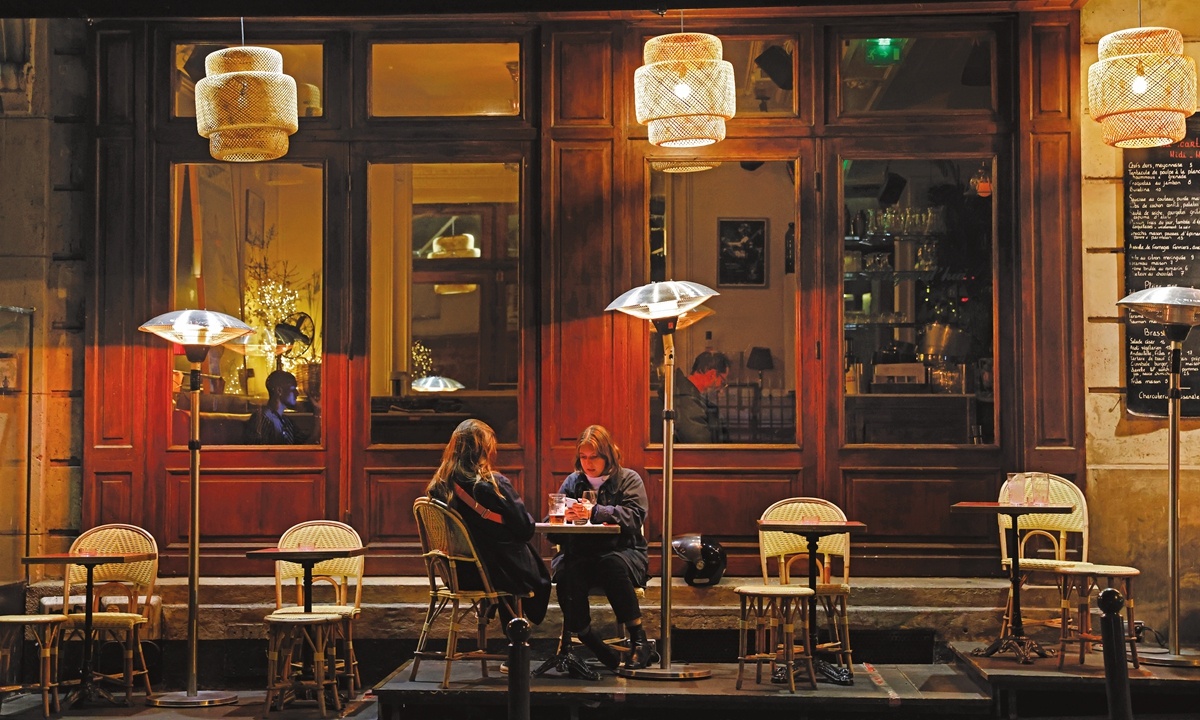 Two women have a drink on the terrace of a restaurant in Paris on October 6. Photo: AFP

Millions of Europeans faced tough new coronavirus restrictions on Saturday as governments stepped up efforts to slow the surge in infections, after the World Health Organization reported a "very concerning" 44-percent rise in European cases over one week.

From Saturday evening, Paris and several other French cities go under a nighttime curfew that will last at least a month. England is banning mixed household gatherings in the capital and other areas, and Italy's most populous region is limiting bar openings and suspending sports events.

The need for action in France was underlined as the country recorded another record for new cases, with over 32,000 registered in 24 hours.

Global cases of the disease, which has killed more than 1.1 million people around the world, have been soaring beyond levels seen in the first wave earlier in 2020, when many countries resorted to national lockdowns to get control of the crisis.

As well as the death toll, the pandemic has wrought social and economic havoc across the world.

The US, which has suffered the worst toll with more than 218,000 fatalities, on Friday revealed a record deficit of $3.1 trillion in the fiscal year ended September 30.

It also announced that the number of cases there had passed 8 million, while global daily infections also hit a new record.

In a bid to stem the worrying rise in infections and in the hope of heading off a return to full lockdowns, many governments have tightened measures to control the spread of the pandemic - even if some dissenters are fighting back in the courts.

About 20 million people in the Paris region and eight other French cities were facing a 9 pm-6 am curfew from Saturday after cases surged in what has once again become one of Europe's major hot spots.

Many restaurant owners are unhappy at the hit their businesses will take.

"Closing at 9 pm will have no effect [on the epidemic]," said Gerard, the manager of a Toulouse restaurant.

"They're not attacking it in the right way."

But as the government there ramped up restrictions, banning indoor meetings between members of different households in London and several other English cities, there was growing criticism from some quarters.

Under the new measures, about 28 million people - half of England's population - are now subject to tight social restrictions. Northern Ireland meanwhile shut down pubs and restaurants on Friday for a month and extended the school holidays.