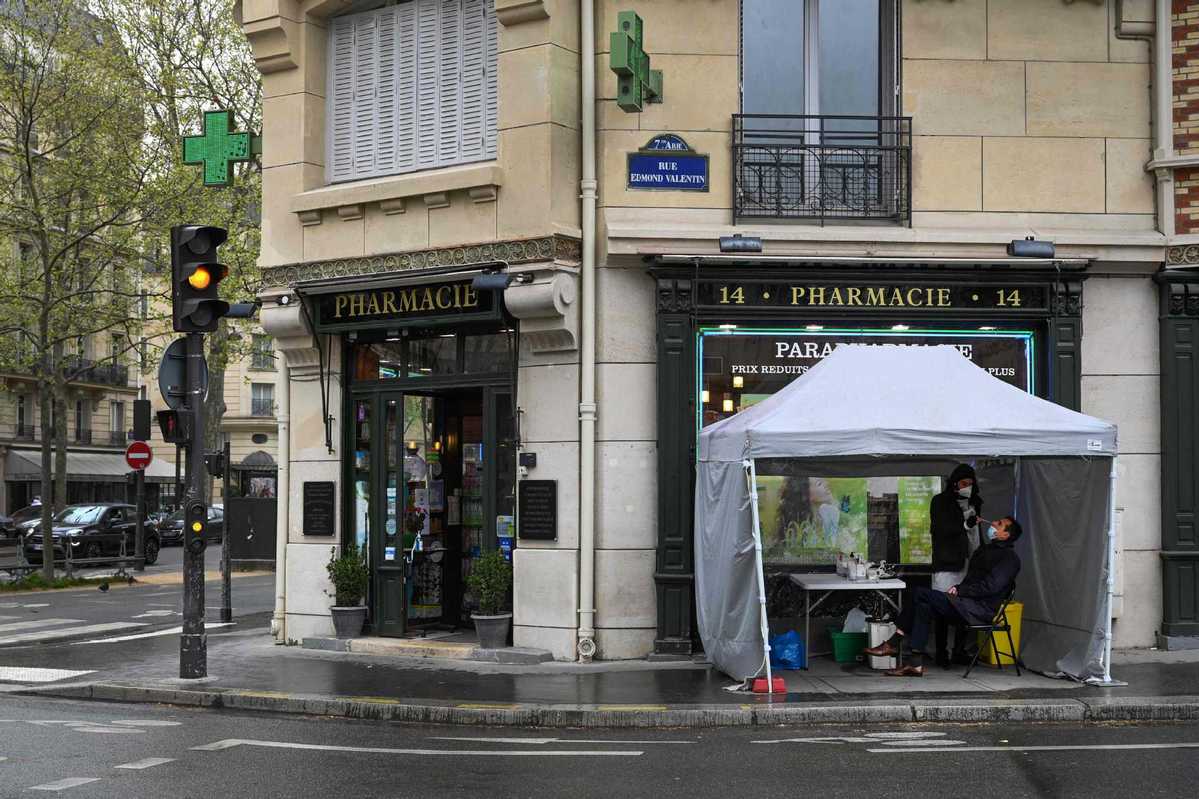 A man gets a COVID-19 test in a curbside testing tent placed in front of a pharmacy, in Paris on April 1, 2022. [Photo/Agencies]

The French government has announced rules to combat energy wastage, including an instruction to shops using air conditioning to keep doors closed or risk being fined.

France's Minister of Ecological Transition Agnes Pannier-Runacher said there were also plans to restrict the use of illuminated signs.

"In the coming days, I will issue two decrees: the first will widen the ban on illuminated advertising, whatever the size of the city, between 1 am and 6 am", with the exception of airports and stations, Pannier-Runacher told the Journal du Dimanche newspaper.

"The second will ban shops from having their doors open while the air conditioning and heating are working," she added.

She said that leaving shop doors open when the air conditioning is on leads to "20 percent more consumption and ... it's absurd", reported the Agence France-Presse.

The government intends to impose a fine of up to 750 euros ($766) for off ending air-conditioned shops.

The ongoing conflict in Ukraine has caused oil and gas prices to soar in Europe and has sparked a cost of living crisis.

Countries across Europe are looking for ways to cut energy consumption and save gas supplies in response to reduced Russian gas deliveries, reported Reuters.

In preparation for a possible total cut-off from Russian gas supplies, many cities across Germany have introduced energy savings measures.

Germany has launched a national campaign to save gas so it has enough to get it through the winter. Gas is reported to account for one-third of industrial usage in Europe's largest economy, and in recent years, half of that gas has come from Russia. Its emergency plan prioritizes gas for households and hospitals, while industry would be the first to face rationing.

The German government has reactivated coal-fired power plants and industrial consumers will be encouraged to save gas through use of an auction model. German residents are being urged to increase fridge temperatures by one degree, better insulate their homes, and to take shorter showers.

Concerns over energy use were exacerbated last week as many parts of Europe were gripped by a heatwave. On both July 18 and 19 temperatures in the United Kingdom exceeded 38 C. Temperatures soared to a UK record 40.3 C in Coningsby, Lincolnshire, on July 18.

Soaring energy bills in the UK and the prospect of supply shortages have led to calls for government intervention, including more financial support. Business Secretary Kwasi Kwarteng has sought to increase coal and gas storage supplies for the winter.