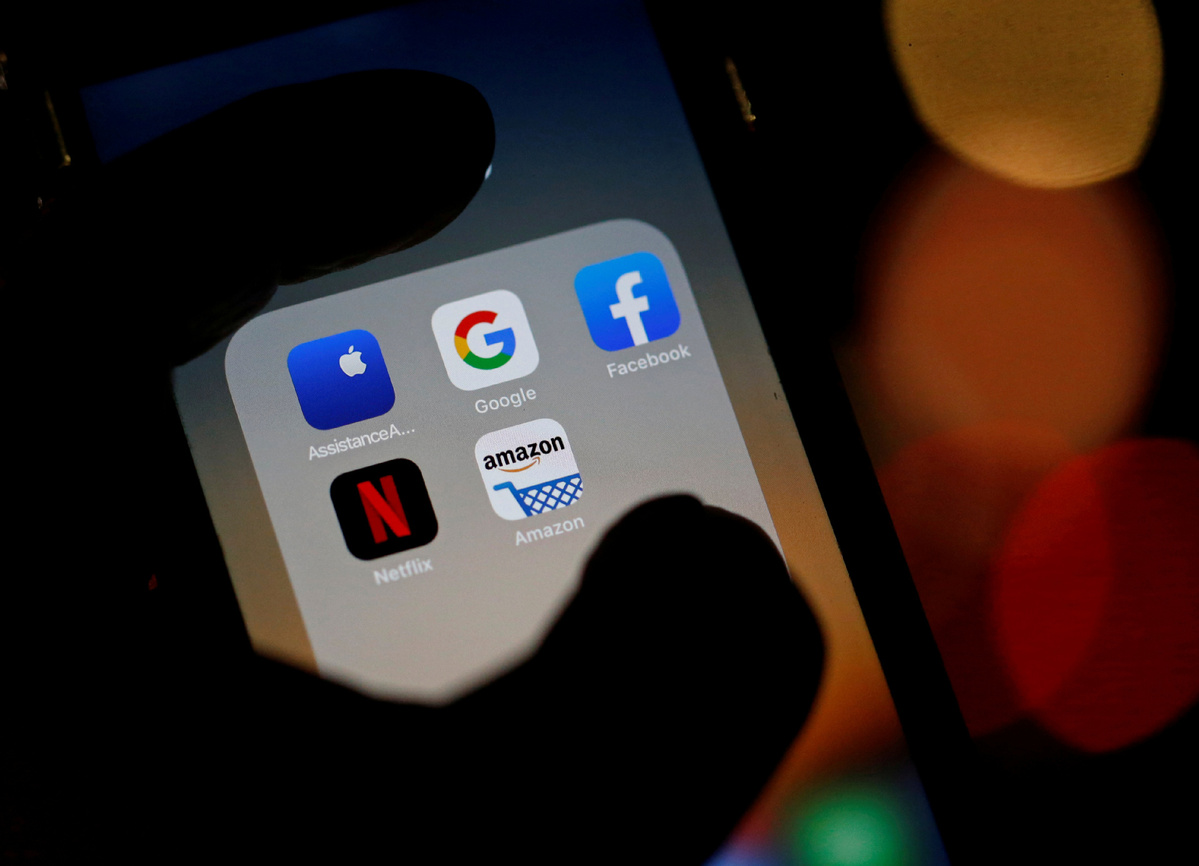 The logos of mobile apps, Google, Amazon, Facebook, Apple and Netflix, are displayed on a screen in this illustration picture taken Dec 3, 2019. (Photo: Agencies)

The prospect of a trade war between Europe and the United States became more real this week, after France warned US President Donald Trump not to retaliate against new French "digital taxes".

France said it will fight back if the US introduces "highly disproportionate" tariffs in response to its 3 percent tax on revenues generated in the country by online giants such as US companies Google, Facebook and Amazon.

Bruno Le Maire, France's finance minister, on Friday wrote to Robert Lighthizer, US trade representative, saying: "If the US were to decide to impose trade sanctions against the EU over the French Digital Services Tax, it would deeply affect the transatlantic relationship at a time when we need to stand united."

Le Maire noted that France is "in touch with the European Commission and other EU member states on the subject" and insisted all are "contemplating the various options to defend our trade rights in a proportionate and determined manner".

The digital tax measure was signed into law by French President Emmanuel Macron in July, but it is retroactively effective from Jan 1, 2019.

The Financial Times predicted punitive US tariffs would elicit similar EU taxes on US goods and services.

Le Maire will meet EU Trade Commissioner Phil Hogan on Tuesday. Also on Tuesday, Lighthizer will host a public hearing to mull likely new US tariffs, which could include a 100 percent tariff on up to $2.4 billion of French goods.

Le Maire noted in his letter that such a tariff would not necessarily benefit the US. "US companies and workers will not benefit from increased tariffs," he wrote. "The only alternative to French products, in some cases, is, in fact, Chinese, rather than American."

The Financial Times said that, if neither side backs down, the dispute could blow up into a wider transatlantic trade war.

Several nations are mulling similar digital taxation programs, with Italy quite advanced with its legislation and Austria, Britain, and Turkey following the same track.

The Organization for Economic Cooperation and Development, or OECD, is also working on a global program to address how and where online companies should pay taxes. And the EU is said to be ready to develop a regional framework if the OECD fails to deliver.