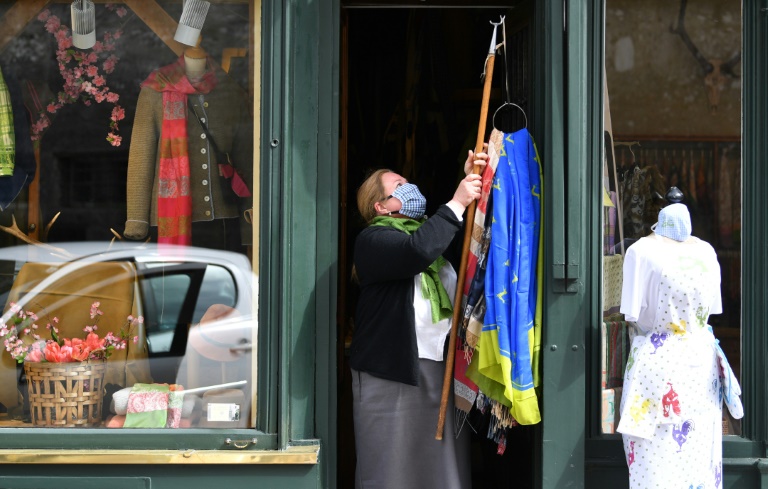 Some shops in Austria reopened Tuesday, though many shoppers wore masks and queues were staggered. (Photo: AFP)

As many countries in Europe believe they are seeing a flattening of the coronavirus curve or a plateau, a gradual re-opening of businesses is taking place, albeit with caution.

Small shops and hardware stores in Austria re-opened on Tuesday as the first step towards a "new normal" amid the COVID-19 pandemic, according to Chancellor Sebastian Kurz.

As of Tuesday morning, shops of up to 400 square meters and hardware stores in the Alpine country have re-opened under strict precautionary measures such as mask-wearing and social distancing.

"We are on track," said Kurz, who believed "The numbers of new infections and of hospitalisations are going in the right direction."

However, masks are mandatory in retail and public transport, he emphasized.

The number of confirmed cases of coronavirus infection in Austria has reached 14,159 as of Tuesday afternoon, with 384 deaths reported.

Spain, one of the European countries hardest hit by COVID-19, is handing out 10 million free masks from Monday to Thursday this week, to commuters going back to work after a two-week lockdown that forced all non-essential workers to stay home to combat the spread of COVID-19.

Face masks are being handed out to commuters at train and metro stations as well as at bus terminals across Spain. Residents can pick up masks at 1,300 distribution points throughout Spain.

Starting from Monday, non-essential workers such as construction staff are allowed to return to work. Meanwhile, the rest of the country remains under lockdown until April 26.

Italy, another country devastated by the pandemic, on Tuesday took its first tentative steps towards reopening its economy five weeks after the first national lockdown entered into force.

Last Friday, Italian Prime Minister Giuseppe Conte formally extended the coast-to-coast quarantine from April 13 to May 3. However, the new decree did allow a few businesses to re-open starting Tuesday. Among them: stores selling clothes and equipment for small children, those selling products for pets, book shops, dry cleaners and electronics stores.

German aircraft engine manufacturer MTU Aero Engines announced that operations at its largest facility in Munich would gradually restart from April 20 onwards, and the restart of operations in its maintenance facilities in the German cities of Hannover and Berlin would start one week later on April 27.

After a three-week suspension of operations, around 20 percent of employees would initially resume their work, the company said.

The state of crisis in the cities of of Debar and Centar Zupa in North Macedonia ended in the past weekend due to no new COVID-19 cases reported for the past 10 days there.

The area was an early hotspot for the pandemic after several citizens visited Italy and returned home with infections. Both Debar and the neighboring villages were locked down in order to prevent the spread of the virus.

However, the citizens from this area will not be allowed to cross municipal borders and the curfew will remain in place under the nationwide state of emergency.

Danish Prime Minister Mette Frederiksen announced on Tuesday that she is seeking for a faster pace in re-opening the society amid a low level of COVID-19 infections in the country.

As daycare, kindergartens and primary schools for 0-5 grades prepare to reopen across the country on Wednesday, the government intends to gather all parties in Parliament to debate on further re-opening measures.

"Each death is, of course, a tragedy, but the numbers show we have the epidemic under control. The curve has flattened, and it is still well within the capacity of the healthcare system," said Magnus Heunicke, Minister for Health and Senior Citizens.

The hospital system is expected to open up more in Denmark, starting with the most urgent surgeries that had been postponed so as to prioritize the COVID-19 patients.