An Air Vanuatu ATR-72 aircraft carrying 39 passengers and four crew members made an emergency landing at Bauerfield airport in Port Vila, capital of Vanuatu on Saturday. 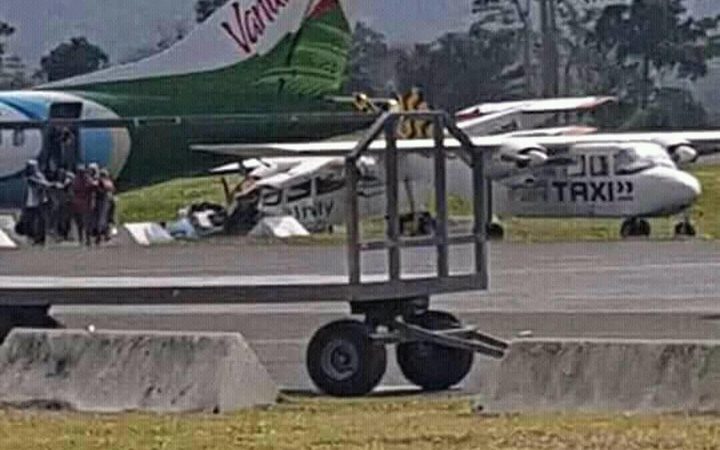 According to the Vanuatu Daily Post, the aircraft, which was inbound to Port Vila from Tanna, an island in Tafea Province of Vanuatu, made the emergency landing shortly before 11 am local time after one of its engines lost power as it overflew the island of Erromango, about 20 minutes away from Bauerfield airport in Port Vila.

After running a significant distance, the plane landed, but it veered to the left, into an area in which several small charter aircraft were parked. One plane belonging to Unity Airlines was a "write off" according to its owner. The nose section of the plane was obliterated, and there is a visible dent in one engine enclosure. Another aircraft, operated by Air Taxi, suffered significant damage to its tail section.

Witnesses said that the plane's cabin was filled with smoke from a fire below and they cut off the starboard engine during flight.

No one was seriously injured, but 13 people reported discomfort due to the smoke, and requested further medical assessment.

Air Vanuatu Ltd later confirmed that the airport had reopened, and one flight, from Port Vila to Fiji's third largest city of Nadi, was cancelled. All other flights were going ahead according to schedule.

Civil Aviation Authority in Vanuatu is investigating the cause of the incident.