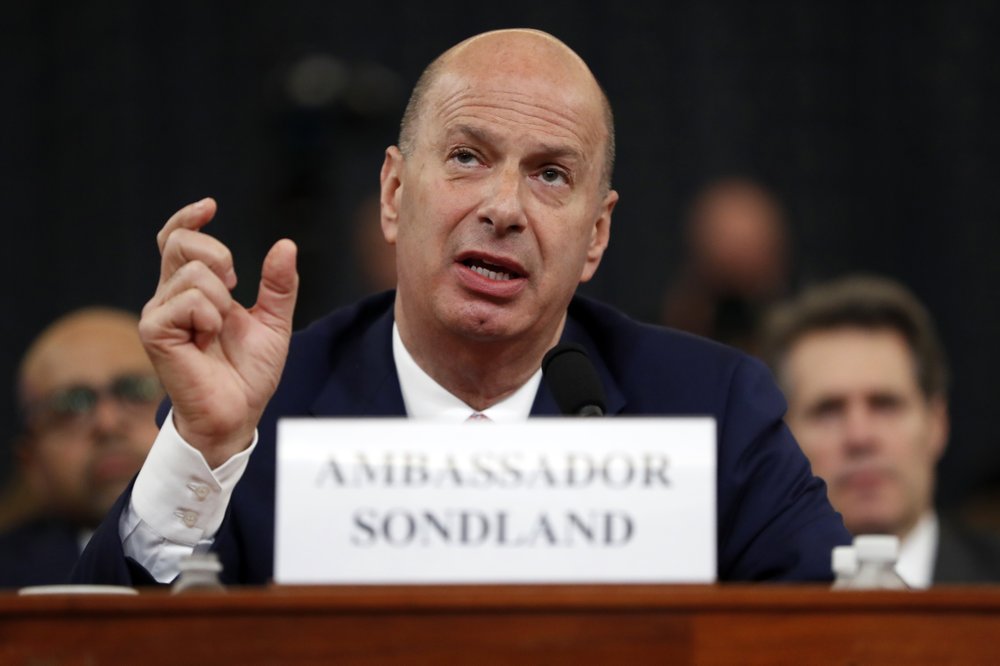 US Ambassador to the European Union Gordon Sondland testifies before the House Intelligence Committee on Capitol Hill in Washington on November 20, 2019. .(Photo: AP)

Exacting swift punishment against those who crossed him, an emboldened President Donald Trump ousted two government officials who had delivered damaging testimony against him during his impeachment hearings. The president took retribution just two days after his acquittal by the Senate.

First came news Friday that Trump had ousted Lt. Col. Alexander Vindman, the decorated soldier and national security aide who played a central role in the Democrats’ impeachment case. Vindman’s lawyer said his client was escorted out of the White House complex Friday, told to leave in retaliation for “telling the truth.”

“The truth has cost Lt. Col. Alexander Vindman his job, his career, and his privacy,” attorney David Pressman said in a statement. Vindman’s twin brother, Lt. Col. Yevgeny Vindman, also was asked to leave his job as a White House lawyer on Friday, the Army said in a statement. Both men were reassigned to the Army.

Next came word that Gordon Sondland, Trump’s ambassador to the European Union, also was out.

“I was advised today that the President intends to recall me effective immediately as United States Ambassador to the European Union,” Sondland said in a statement.

The White House had not been coy about whether Trump would retaliate against those he viewed as foes in the impeachment drama. White House press secretary Stephanie Grisham said Thursday that Trump was glad it was over and “maybe people should pay for that.”

House Speaker Nancy Pelosi said in a statement that Vindman’s ouster was “a clear and brazen act of retaliation that showcases the President’s fear of the truth. The President’s vindictiveness is precisely what led Republican Senators to be accomplices to his cover-up.”

Rep. Jackie Speier, D-Calif., called it “the Friday Night Massacre,” likening the situation to President Richard Nixon’s so-called Saturday night massacre, when top Justice Department officials resigned after refusing to do his bidding by firing a special prosecutor investigating the Watergate scandal. (The prosecutor himself was fired anyway.)

Speier added in her tweet, “I’m sure Trump is fuming that he can’t fire Pelosi.”

Senate Republicans, who just two days prior acquitted Trump of charges he abused his office, were silent Friday evening. Many of them had reacted with indignation during the Senate trial when Democratic Rep. Adam Schiff, the lead prosecutor, suggested Trump would be out for revenge against the lawmakers who crossed him during impeachment.

Since his acquittal, Trump has held nothing back in lashing out at his critics, including Sen. Mitt Romney of Utah, the only Republican to vote against him. On Friday, he also took after Sen. Joe Manchin, a moderate Democrat from West Virginia who Trump had hoped would vote with the Republicans for his acquittal but who ended up voting to convict.

Trump tweeted that he was “very surprised & disappointed” with Manchin’s votes, claiming no president had done more for his state. He added that Manchin was “just a puppet” for the Democratic leaders in the House and Senate.

From the White House on Saturday, the president tweeted that some television coverage portrayed Vindman “as though I should think only how wonderful he was.” Trump said he didn’t know Vindman and had never met or spoken with him but considered him “very insubordinate.”

Sondland, too, was a crucial witness in the House impeachment inquiry, telling investigators that “everyone was in the loop” on Trump’s desire to press Ukraine for politically charged investigations. He told lawmakers how he came to understand that there was a quid pro quo connecting a desired White House visit for Ukraine’s leader and an announcement that the country would conduct the investigations Trump wanted.

Sondland “chose to be terminated rather than resign,” according to a US official who spoke on condition of anonymity because the official had not been authorized to discuss the matter publicly.

Alexander Vindman’s lawyer issued a one-page statement that accused Trump of taking revenge on his client.

“He did what any member of our military is charged with doing every day: he followed orders, he obeyed his oath, and he served his country, even when doing so was fraught with danger and personal peril,” Pressman said. “And for that, the most powerful man in the world — buoyed by the silent, the pliable, and the complicit — has decided to exact revenge.”

The White House did not respond to Pressman’s accusation. “We do not comment on personnel matters,” said John Ullyot, spokesman for the National Security Council, the foreign policy arm of the White House where Vindman was an expert on Ukraine.

Vindman’s status had been uncertain since he testified that he didn’t think it was “proper” for Trump to “demand that a foreign government investigate” Biden and his son’s dealings with the energy company Burisma in Ukraine. Vindman’s ouster, however, seemed imminent after Trump mocked him Thursday during his post-acquittal celebration with Republican supporters in the East Room and said Friday that he was not happy with him.

“You think I’m supposed to be happy with him?” Trump told reporters on the South Lawn of the White House. “I’m not. ... They are going to be making that decision.”

Vindman, a 20-year Army veteran, wore his uniform full of medals, including a Purple Heart, when he appeared late last year for what turned out to be a testy televised impeachment hearing. Trump supporters raised questions about the immigrant’s allegiance to the United States — his parents fled the Soviet Union when he was a child —and noted that he had received offers to work for the government of Ukraine, offers Vindman said he swiftly dismissed.

In gripping testimony, Vindman spoke of his family’s story, his father bringing them to the US some 40 years ago.

“Dad, my sitting here today in the US Capitol, talking to our elected officials, is proof that you made the right decision 40 years ago to leave the Soviet Union and come here to United States of America in search of a better life for our family,” he testified. “Do not worry, I will be fine for telling the truth.”’

Hillary Clinton, the 2016 Democratic presidential nominee, recalled Vindman’s testimony that he would be fine and tweeted, “It’s appalling that this administration may prove him wrong.”

Rep. Lee Zeldin, R-N.Y., tweeted that Vindman “should not be inside the National Security Council any longer. It’s not about retaliation. It’s because he cannot be trusted, he disagrees with the President’s policies, & his term there is coming to an end regardless.”

News that both Vindman twins had been ousted led Rep. Paul Gosar, R-Ariz., to tweet, “The White House is running a two for one special today on deep state leakers.”

Defense Secretary Mark Esper was asked what the Pentagon would do to ensure that Vindman faces no retribution. “We protect all of our service members from retribution or anything like that,” Esper said. “We’ve already addressed that in policy and other means.”

Alexander Vindman is scheduled to enter a military college in Washington, D.C., this summer, and his brother is to be assigned to the Army General Counsel’s Office, according to two officials who were not authorized to discuss the matter publicly and so spoke on condition of anonymity.

Several career diplomats whose testimony during the impeachment hearings also helped Democrats build their case against Trump remain in their posts, in Washington and in Kyiv. The former ambassador to Ukraine, Marie Yovanovitch, whose ouster in spring 2019 was a focus of the hearings and who testified herself, has recently retired from government service.