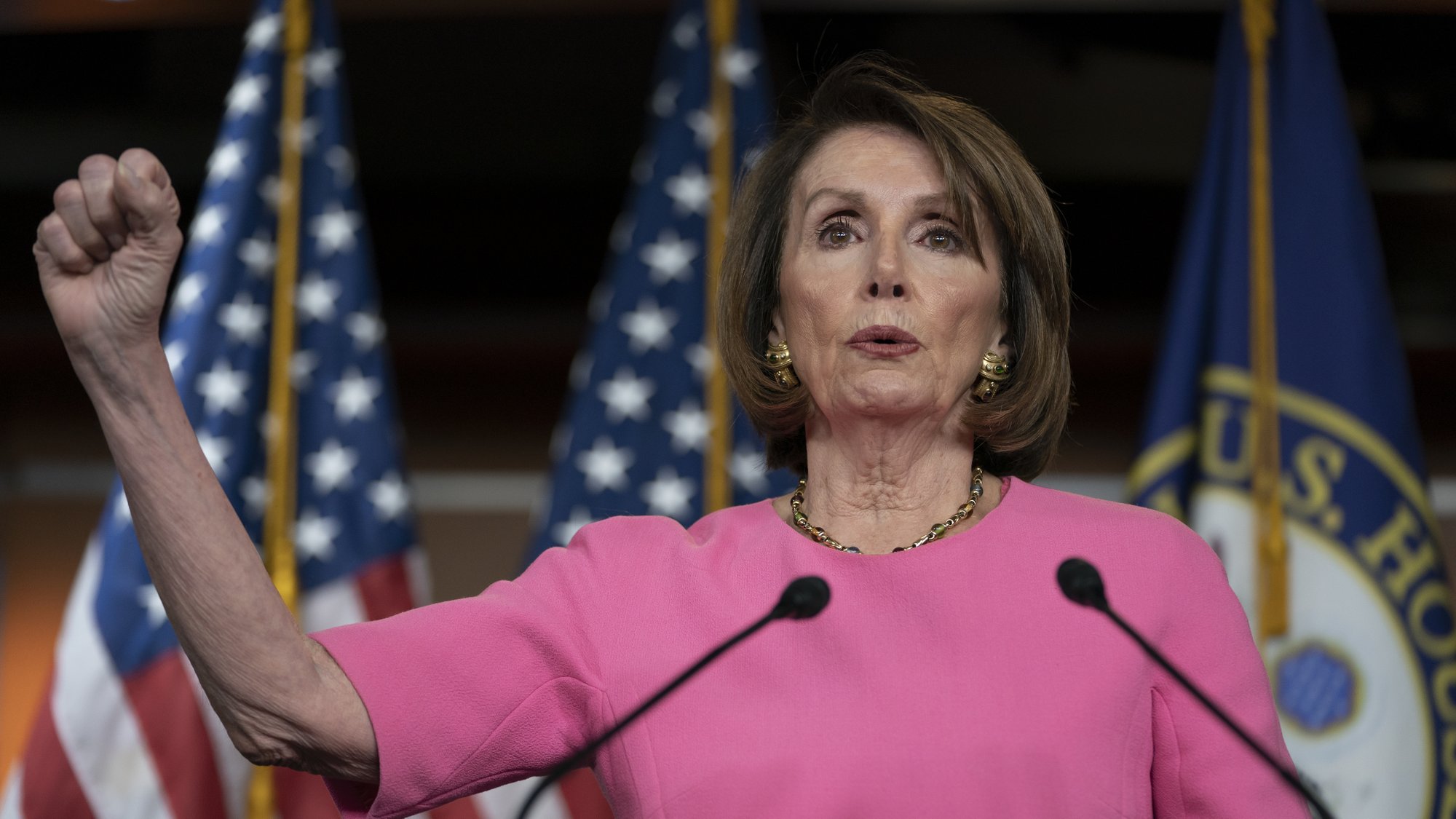 Speaker of the House Nancy Pelosi, D-Calif., meets with reporters at the Capitol in Washington, Thursday, May 23, 2019. (Photo: AP)

US House Speaker Nancy Pelosi openly questioned President Donald Trump’s fitness to remain in office Thursday, suggesting a staff or family “intervention” for the good of the nation after his dramatic blow-up at a White House meeting with Democrats. Trump responded by calling her “crazy.”

“She’s a mess,” Trump told reporters at an afternoon news conference in which he lined up White House staff to testify to his calmness at a meeting with Pelosi and Senate Democratic Leader Charles Schumer. “Cryin’ Chuck, Crazy Nancy ... I watched Nancy and she was all crazy yesterday,” he claimed.

As for himself, he declared, “I’m an extremely stable genius.”

Both the Republican president and Democratic leaders dug in a day after Trump stalked out of the Cabinet Room demanding an end to all congressional probes before he would work with Congress on crumbling US infrastructure and other matters. By Thursday as Congress prepared to recess for the Memorial Day break, both sides were questioning each other’s stability, with the president insisting on Twitter that he was calm when he left the White House meeting that was to focus on infrastructure spending after just three minutes.

Pelosi said Trump has established a pattern of unpredictability, and at one point she even joked about the 25th Amendment, the Constitution’s provision laying out the procedure for replacing a president.

“I wish that his family or his administration or his staff would have an intervention for the good of the country,” Pelosi said at her weekly news conference, adding that she prays for him and the nation.

“Maybe he wants to take a leave of absence,” she said. Asked whether she’s concerned about Trump’s well-being, she replied, “I am.”

Pelosi also said the White House is “crying out” for the Democrats to launch impeachment hearings — the idea being that such a move would help him politically. White House aides believe that if Democrats move to impeach — and even if they win approval of articles of impeachment in the House — Trump would be acquitted in the GOP-controlled Senate, supporting his assertion that he’s a victim of Democratic harassment and helping him toward re-election. But the president denied that he’s urging the Democrats on.

“I don’t think anybody wants to be impeached,” Trump said.

However genuine, accusations of infirmity dominated the exchanges on Thursday and raised questions about whether Pelosi and Trump could work together on must-do tasks this year, such as raising the debt limit and funding the government. White House spokeswoman Sarah Sanders said staff-level work on critical policy and spending continues.

Yet Sanders also said on CNN that it was “lunacy” and “insane” for Democrats to think everyone could just proceed after Pelosi accused Trump of a “cover-up” just before the meeting Wednesday.

“It’s very hard to have a meeting where you accuse the president of the United States of a crime and an hour later show up and act as if nothing has happened,” Sanders told reporters outside the White House.

Hanging over the increasingly personal exchanges is a drumbeat among about two dozen Democrats and one Republican to launch impeachment hearings against Trump based on details in special counsel Robert Mueller’s report that Trump repeatedly tried to block the investigation . Pelosi has resisted, preferring a methodical process by which Congress investigates and lays out the facts on the question of obstruction of justice. But she’s been clear this week that any such finding could be worthy of a formal indictment by the House — that is, impeachment.

Pelosi also is balancing the calls for impeachment with the concerns of members from divided districts who helped flip the House to Democratic control and now face tough re-elections 2020.

Pelosi, the second in line to the presidency, said she thinks Trump’s actions Wednesday were part of his skill at distraction. But she also suggested that he’s unpredictable.

“Sometimes when we’re talking to him he agrees,” she said, only to change his mind. “He says he’s in charge and he may be.”

During questions, Pelosi also joked with a reporter about the 25th Amendment. “That’s a good idea. I am going to take it up with my caucus. Not that they haven’t been thinking about it.”

She has been insulting Trump since the meeting on Wednesday.

“For some reason, maybe it was lack of confidence on his part ... he took a pass, and it just makes me wonder why he did that,” she told reporters back on Capitol Hill. “In any event I pray for the president of the United States.”

“Nancy, thank you so much for your prayers, I know you truly mean it!” Trump tweeted from the White House.

Yet the White House is returning the Democrats’ insults.

Repeatedly pressed on why the president seemed unwilling to multitask and work on legislation as other presidents under investigation have, Sanders maintained, “I think the Democrats have shown that they’re not capable of doing anything else.”

In fact, the Democratic-controlled House has passed several bills on issues including firearms background checks, prescription drugs and campaign finance reforms — though they were dead on arrival in the GOP-controlled Senate.

Sanders insisted that Trump’s walk-out Wednesday wasn’t planned before Pelosi’s comments and that the White House placard that appeared on Trump’s lectern as he denounced Democrats moments later had been printed “weeks ago.” Asked why Trump couldn’t work with Democrats after Pelosi’s comments because he felt insulted, Sanders said, “The president’s feelings weren’t hurt. She accused him of a crime. Let that sink in.”