WORLD Pelosi's call for boycott of Beijing Olympics an overestimation of US appeal: experts

Pelosi's call for boycott of Beijing Olympics an overestimation of US appeal: experts 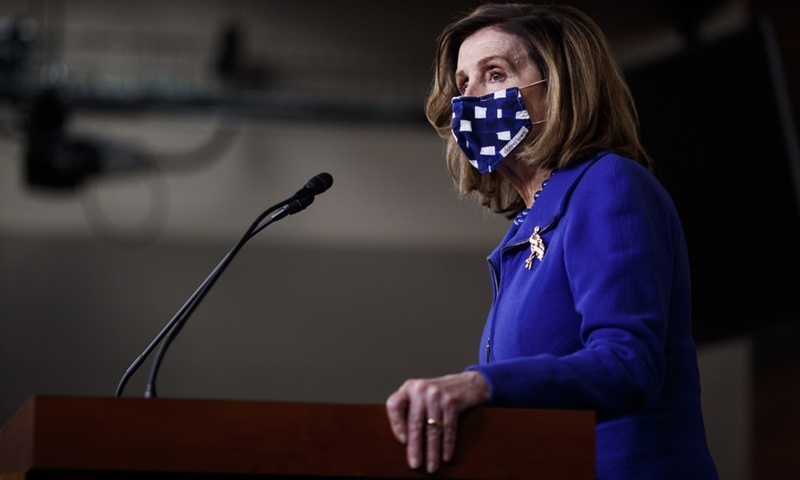 US House Speaker Nancy Pelosi has overestimated the US' appeal in calling for a "diplomatic boycott" of the 2022 Beijing Olympics, Chinese observers said, which will have little effect on the Games even if the Biden administration would implement it.

At a hearing of the Tom Lantos Human Rights Commission in the House on Tuesday, Pelosi urged the US and other nations not to send high-level delegations to the 2022 Beijing Olympics in order to pressure the Chinese government over so-called "persecution" of Uygurs.

Zhao said some US individuals' personal statements are full of lies and fake information and represent a typical American farce that is bound to fail.

Chinese Embassy in the US spokesperson Liu Pengyu told Reuters, "What makes some US politicians think they actually have the so-called 'moral authority?' On human rights issues, they are in no position, either historically or currently, to make wanton groundless criticisms against China."

Based on rumors and lies of "human rights violations" in China's Xinjiang, the call for a boycott of the 2022 Beijing Olympics began a few months ago among Western countries, but no Western government has formally submitted to such political pressure.

Chinese experts agreed that it is a tactic the Biden administration wants to make use of to win support for the midterm elections, and even if the boycott would be implemented, it would have little impact on the Games.

Japanese government spokesperson Katsunobu Kato said at a Wednesday press conference that Japan has yet to make any decision over a 2022 Olympics boycott, nor has the country started any procedure on the issue.

The Tuesday statement makes Pelosi the highest-ranking American politician to call for a boycott of the 2022 Beijing Winter Olympic Games.

Pelosi wrongly thought that when the US shouted words out loud, other countries would respond to its quixotic and narcissistic ideology and forget the US' great failure on past domestic and foreign policies and the negative impact they have had on the world. Pelosi overestimated the appeal of the US while underestimating the judgment of other countries, Li Haidong, a professor at the Institute of International Relations at China Foreign Affairs University, told the Global Times on Wednesday.

The 81-year-old Pelosi is a typical figure from the past who formed her worldview during the Cold War. Obviously, she failed to catch up with the development of the new era, Li said.

The "diplomatic boycott" of the 2022 Beijing Olympics sought by Pelosi is more of an attempt to scramble for diplomatic dominance with the White House and influence the Biden administration, Li noted.

While US hardliners on China openly called for a boycott of the 2022 Olympics, the US government has been relatively cautious over the issue. The US government has yet to reach any consensus, and is unlikely to rope in other Western countries, said Cui Hongjian, director of the Department of European Studies at the China Institute of International Studies.

The Olympics are meant to be a joyous celebration of sports, but some politicians insist on politicizing sports, which will cripple the reputation of the Olympics and go against the spirit of the Olympic Charter, observers said.

According to Pelosi's mindset, US attendance in the Olympics would deprive US leaders the ability to point a finger at China on human rights, Li said, asking what right does the US have to judge other countries with that "moral authority" and sense of superiority, given its dirty record on human rights?