Pennsylvania race to test how tax law plays with voters 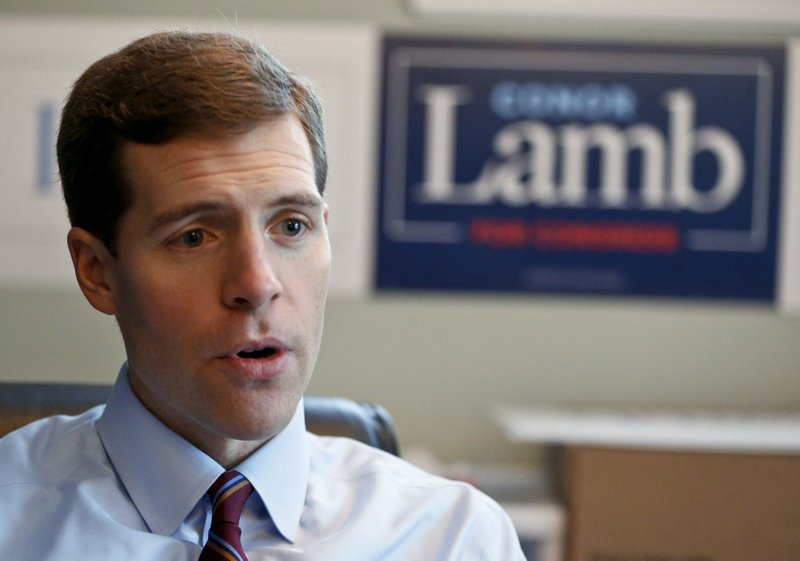 In southwest Pennsylvania, Democratic congressional hopeful Conor Lamb hammers the new Republican tax law as a gift to corporations and the wealthy that will add to the national debt and give the GOP-led Congress an excuse to gut Social Security and Medicare.

Rick Saccone, Lamb’s opponent in the 18th Congressional District that wraps around Pittsburgh, says the sweeping tax changes will goose the economy and give Americans bigger paychecks. National Republican groups, meanwhile, are blanketing television stations here with ads to tell voters that Lamb simply doesn’t want them to have lower taxes.

It’s a defining fault line ahead of the 2018 midterm elections, and the outcome for Lamb could serve as a guidepost for Democrats as they try to reclaim a House majority this November.

Democrats must flip at least 24 GOP-held seats to regain a majority, and the Pennsylvania seat — in a district Trump won by almost 20 points in 2016 — would be an unexpected boost.

The emphasis being placed on taxes ahead of the March 13 special election here also may remind the power players in Washington that the midterm elections will not revolve exclusively around the tempests that regularly consume the nation’s capital — the Russia investigations, a lingering immigration stalemate, the occasional government shutdown. The November outcome will turn as much or more on voters’ fundamental impressions about how Congress is affecting their wallets, now and in the future.

But as Lamb tries to make his race about those bread-and-butter matters, he’s getting hammered by Republicans.

The GOP’s House campaign committee has aired a television ad hailing Saccone as a faithful tax cutter and accusing Lamb of using “the same crummy words” as Pelosi to decry the tax bill. Pelosi has mocked some U.S. corporations for giving employees one-time bonuses after the tax cuts; she called them “crumbs” in comparison to benefits for many large businesses and their executives.

Lamb doesn’t usually describe bonuses or wage hikes as crumbs when talking to voters — though he’s used the word before in at least one interview. His preferred description is to call the law a “betrayal” of middle-class households.

“It’s great we got tax relief for the working class and middle class, too, but we could have had that without adding a penny to the national debt,” the former federal prosecutor told about 150 voters at a recent campaign stop.

He said Republicans had to “give tax relief to their donors, to the 1 percent and big corporations,” while setting up Speaker Paul Ryan’s long-term aims of limiting the price tag of Medicare and Social Security.

“Paul Ryan came out and said it the very next day,” Lamb said, referring to Ryan’s comments after Congress passed the tax law. The speaker told a Denver radio station, “We’re going to have to get back next year at entitlement reform.”

Saccone, 59, is keeping his argument plain.

“Tax cuts, lower regulations and smaller government” are good for business and the people who work for them, he said in an interview. That’s “the Trump agenda” and “the Saccone agenda.”

The Pennsylvania state representative is sidestepping nonpartisan analyses that the law will add $1.5 trillion to the national debt over the course of a decade, despite Republicans’ insistence that economic growth will replenish the treasury with higher tax receipts.

Asked about the congressional spending agreement — after it was announced but before it had passed — Saccone said, “I haven’t reviewed the details.” He added that he’d “never” cut Social Security or Medicare.

Lamb acknowledges he may not have the easier sell, and some other Democrats agree with him.

“If we spend all of our cycle running against the tax bill, it’s probably going to be a mistake,” said Julie Greene, a former Democratic National Committee aide who now leads midterm campaign efforts for the AFL-CIO, the nation’s largest union organization.

During fall debate over the tax overhaul, public opinion aligned with Democrats against the bill. But the GOP believes opposition will wane now that workers who thought they wouldn’t get a tax cut are seeing benefits.

“When I see a real-time improvement in my paycheck, I’m not thinking about what the CEO is making or his tax windfall. We need to take a more holistic approach,” Greene warns.

Lamb insists that’s what he’s doing. Voters, he believes, can see GOP priorities in a tax law that makes corporate tax rate cuts permanent, while putting a 2026 expiration date on changes for individuals. They can see that the long-term balance sheet “puts us in a weaker position” when considering a trillion-dollar commitment to infrastructure that will require more borrowing on top of a rising debt, he says.

Even if they pay less in taxes, Lamb says, voters who hear simplistic arguments are “insulted.”