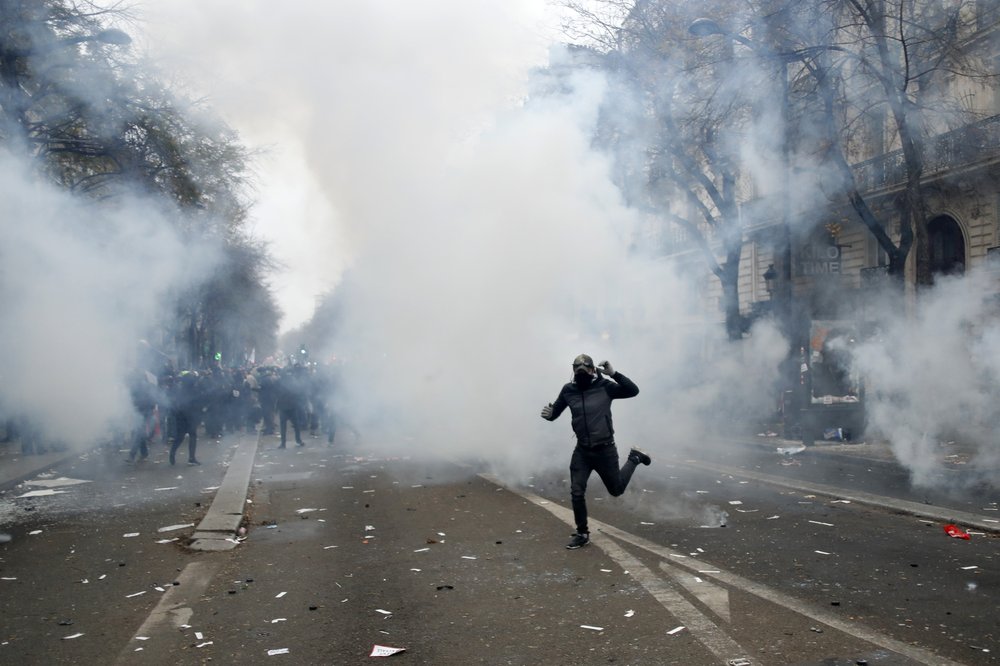 A youth runs during a demonstration in Paris, Thursday, Dec. 5, 2019. Small groups of protesters are smashing store windows, setting fires and hurling flares in eastern Paris amid mass strikes over the government's retirement reform. (Photo: AP)

TV footages showed that police fired tear gas to disperse hooded individuals at the front of unions' march. They pelted anti-riot officers with stones, ransacked a nearby bus stop and set a trailer on fire.

Similar scuffles between police and protesters were reported in Nantes and Rennes in the west and in Bordeaux in the southwest.

About 700 ultra-activists, known as "Black Blocs," infiltrated the march in the capital, local media reported. Faced with a high risk of rioting, the government deployed 6,000 police and gendarmes in the capital city's streets.

Labor unions organized 245 protests and rallies across the country on Thursday to manifest their opposition to Macron's plan to merge the 42 different pension schemes for different professions into a universal point-based system.

Critics say that would effectively force people to work longer, in particular public sector workers who have often been allowed to retire earlier due to their tough working conditions.

Defying freezing temperatures, an estimated 250,000 demonstrators took to the streets in Paris and 35,000 in Lyon, according to the CGT trade union.

Police counted 700,000 participants countrywide. Total figures from the trade unions are not available yet.