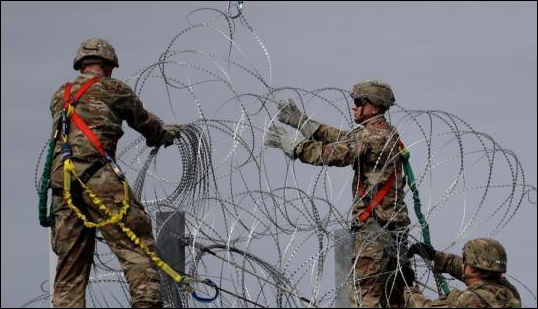 The Department of Homeland Security has asked the military to provide more help securing the US-Mexico border, two defense officials said Friday amid a political standoff over President Donald Trump's demand for more money to build a border wall.

The acting secretary of defense, Pat Shanahan, has not decided how to respond to the DHS request, but in the past the Pentagon has provided help when asked. At one point last fall there were nearly 5,900 active-duty troops along the border in Texas, Arizona and California to assist border patrol agents and to erect wire barriers. That number now is about 2,350.

The defense officials said DHS asked for certain military capabilities, not any number of troops. It will be up to Shanahan to decide whether more active-duty troops are dispatched. The officials spoke on condition of anonymity because the request for assistance has not yet been fully processed.

One of the officials said DHS wants the military to put up concertina wire as barriers along 160 miles of border. That would be in addition to 70 miles of concertina wire that combat engineers put up last fall. If the new work is taken on by the military, it might require an extension of the current deployment beyond its scheduled end Jan. 31. The official said DHS did not specifically ask for an extension, but it has not been ruled out.

The troops have been erecting and reinforcing border barriers but are not performing law enforcement tasks or engaging with migrants. Some also have been providing transportation and logistical help as well as medical assistance to troops and to Customs and Border Protection personnel along the border.

Many in Congress, including leading Democrats, have criticized the troop deployments as a waste of money and a misuse of military resources.

Separately, there are about 2,200 National Guard troops deployed along the border. It is possible that some of those, or additional deployments of National Guard personnel, could be used to perform some of the work requested by DHS.