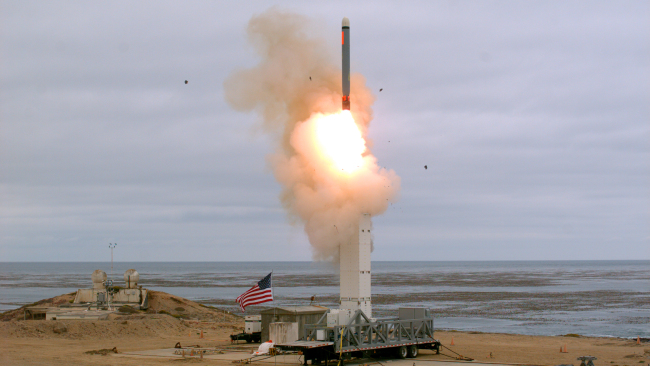 This photo shows the launch of a conventionally configured ground-launched cruise missile on San Nicolas Island off the coast of California on Sunday, Aug. 18, 2019. (Photo: AP)

The US military has conducted a flight test of a type of missile banned for more than 30 years by a treaty that both the United States and Russia abandoned this month, the Pentagon said.

The test off the coast of California on Sunday marked the resumption of an arms competition that some analysts worry could increase US-Russian tensions. The Trump administration has said it remains interested in useful arms control but questions Moscow's willingness to adhere to its treaty commitments.

The Pentagon said it tested a modified ground-launched version of a Navy Tomahawk cruise missile, which was launched from San Nicolas Island and accurately struck its target after flying more than 500 kilometers (310 miles). The missile was armed with a conventional, not nuclear, warhead.

US Defense officials had said last March that this missile likely would have a range of about 1,000 kilometers (620 miles) and that it might be ready for deployment within 18 months.

The missile would have violated the Intermediate-range Nuclear Forces (INF) Treaty of 1987, which banned all types of missiles with ranges between 500 kilometers (310 miles) and 5,500 kilometers (3,410 miles). The US and Russia withdrew from the treaty on Aug. 2, prompted by what the administration said was Russia's unwillingness to stop violating the treaty's terms. Russia accused the US of violating the agreement.

In addition to the land-variant of the Tomahawk cruise missile, the Pentagon has said it also intends to begin testing, probably before the end of this year, an INF-range ballistic missile with a range of roughly 3,000 kilometers (1864 miles) to 4,000 kilometers (2485 miles). Both missiles are to be non-nuclear.

US Defense Secretary Mark Esper said this month that he hopes the Pentagon can develop and deploy INF-range missiles "sooner rather than later," but no specific timeline has been announced.

The collapse of the INF Treaty, which was signed by the Soviet Union and the United States in 1987, has triggered the fear that a new round of arms race is looming, many analysts say.